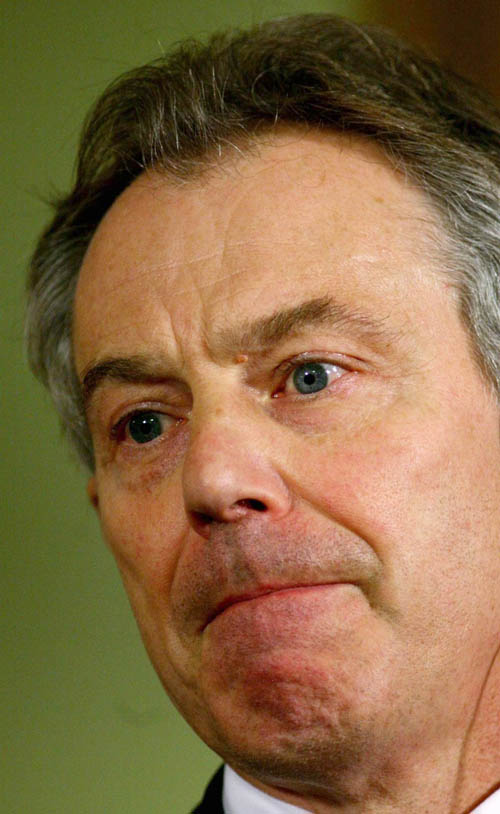 Britain said on Wednesday it would begin withdrawing troops from Iraq, triggering a new political standoff in Washington over U.S. President George W. Bush's decision to deploy thousands of extra U.S. soldiers.
In Iraq, U.S. officials said insurgents shot down a U.S. military helicopter with nine people on board north of Baghdad but no one was killed. It was the eighth downing of a helicopter in Iraq in a month.
The White House portrayed British Prime Minister Tony Blair's announcement London would withdraw almost a quarter of its troops in coming months as a sign of progress but opposition Democrats seized on it to press Bush to bring U.S. troops home.
"I think [the British] believe that in southern Iraq, that Basra region where (British troops have) been most active, we have made significant progress," Vice President Dick Cheney told ABC News in Japan.
Efforts by Democrats in control of the U.S. Congress to withdraw forces would hurt the broader fight against terrorism, he said. Last week, the House of Representatives passed a symbolic resolution opposing more U.S. soldiers in Iraq.
Democrats seized on Blair's statement as support for their position that a political solution was needed rather than sending more troops into the four-year conflict in Iraq, in which 3,148 U.S. soldiers have been killed.
"There can be no purely military solution in Iraq," said Senate Majority Leader Harry Reid. "At a time when President Bush is asking our troops to shoulder a larger and unsustainable burden policing a civil war, his failed policies have left us increasingly isolated in Iraq and less secure here at home."
Blair, whose popularity at home has sunk because of his support for Bush over Iraq, said British troop levels would be reduced by 1,600 but soldiers would remain into 2008 to provide support and training if Iraq wanted.
"The actual reduction in forces will be from the present 7,100 - itself down from over 9,000 two years ago - to roughly 5,500," he told parliament.
Denmark and Lithuania said they would withdraw most of their troops from Iraq by August. Many other countries which joined U.S.-led forces in Iraq, such as Japan and Spain, have already pulled out troops.
Bush is sending 21,500 more troops to Iraq where U.S. forces number some 141,000.
Blair, due to step down this year, said Britain's plans reflected different security conditions faced by U.S. troops in Baghdad and those in the south where Britain handed over command of the main Iraqi army unit in Basra to Iraqis on Tuesday.
Anthony Cordesman at the Center for Strategic and International Studies in Washington said the British withdrawal would play into the hands of Iranian-backed Shiites in Iraq.
"The British cuts will in many ways simply reflect the political reality that the British 'lost' the south more than a year ago," he said.
In Basra, Iraq's second city and a major center for oil production, many expressed relief at the planned British withdrawal but some voiced fears it was premature.
Iraqi Prime Minister Nuri al-Maliki has called the U.S.-backed security crackdown in Baghdad which started last week a "brilliant success." But a spate of car bombs that have killed scores has tempered early optimism.