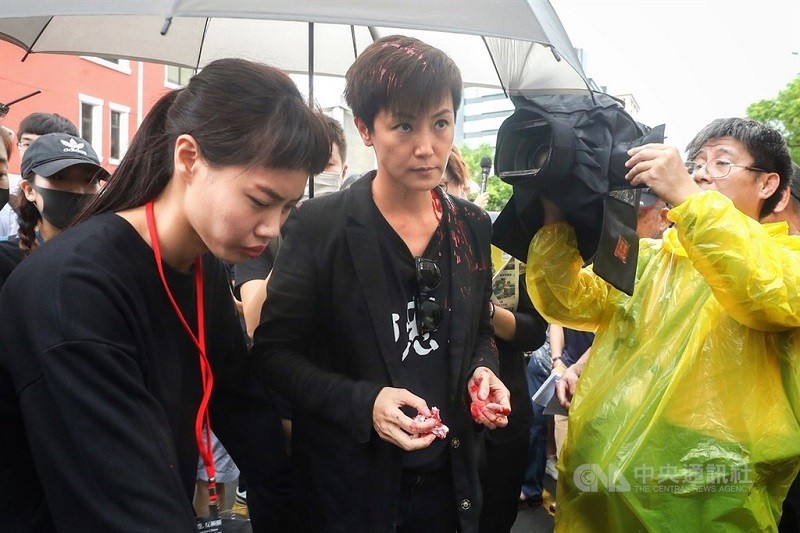 TAIPEI (Taiwan News) — A total of 11 Taiwanese are facing prosecution for their involvement in a paint attack on Hong Kong singer-activist Denise Ho (何韻詩) in Taipei last September.

Hu Chih-wei (胡志偉) and Liang Tai-fu (梁太富) are among the 11 people charged with violence and threats, public insults, and damages by the Taipei District Prosecutor’s Office, according to CNA. They are also facing charges for violating the Assembly and Parade Act.

The singer-turned-activist was assaulted with red paint last September shortly before a rally held in solidarity with Hong Kong’s pro-democracy protesters. Hu splashed red paint on Ho’s head while she was giving an interview to a group of reporters at the site of the assembly.

Hu and Liang were immediately stopped by witnesses who later turned them over to the police. The singer, accompanied by Legislator Freddy Lim (林昶佐), later called a press conference to express her indignation over the incident and declare her intention to take legal action against the attackers.

Most of the 11 are members of the Dachen Nostalgia Culture Association (大陳島鄉情文化促進會) and Chinese Unification Promotion Party (中華統一促進黨), both of which are pro-Beijing groups that promote the unification of Taiwan and China.

Prosecutors learned that the group was resentful of the solidarity rally, which was aimed to voice support for Hong Kong’s protests while calling for resistance to China’s growing pressure on Taiwan. They decided to organize the attack after learning that prominent pro-democracy figures from Hong Kong, including Ho, would take part in the event.

They had thought about using paint, as well as bags or water guns containing food waste, on their potential targets, the prosecutors said. The incident shocked the public as well as Taiwanese politicians, including President Tsai Ing-wen (蔡英文), who pledged to mete out severe punishment on those who challenge the country’s rule of law.