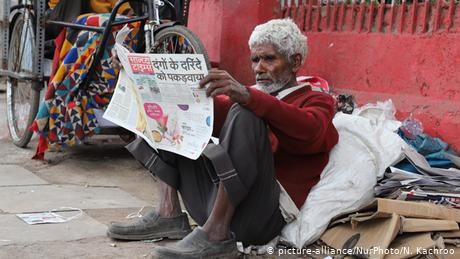 The resignation of Anirban Chattopadhyay, editor of one of the most widely circulated Bengali language newspapers, Anandabazar Patrika, came as a surprise to the journalist community in India. It also triggered speculation that Chattopadhyay had been forced to step down.

Chattopadhyay had recently been in the line of fire from West Bengal state authorities, with Chief Minister Mamata Banerjee openly criticizing the newspaper. Some analysts say the newspaper drew the government's ire after it reported about a shortage of Personal Protective Equipment (PPE) for doctors who are treating coronavirus patients.

"The whole thing smacks of the government's high-handedness. This is happening everywhere in the country, not only in the state of West Bengal. Journalists are being harassed for criticizing the government's policies and actions. It is alarming that these things are happening during the pandemic," Pamela Philipose, a media commentator, told DW.

"The authoritarian style of governance of the Bharatiya Janata Party (BJP), which has been in power at the federal level since 2014, is now being replicated by a number of state governments," she added.

India has so far recorded close to 260,000 COVID-19 cases, taking its total above that of worst-hit European nations like Spain and Italy. Over 7,000 people have died from the virus.

Authorities have eased most of the lockdown restrictions, but the government's handling of the health crisis has drawn sharp criticism from some health experts and civil society.

Reporters say the public health system in Mumbai, India's financial capital, is on the verge of collapse while hospitals in the capital New Delhi are overburdened.

Last month, police registered cases against six journalists in the northern Himachal Pradesh state for reporting about problems faced by migrant workers amid the COVID-19 lockdown. Some reports stated that the stranded laborers did not receive adequate help from the authorities.

Read more: Coronavirus: Is it too early to ease lockdown restrictions in India?

Police said the reports were "fake" and invoked the Disaster Management Act against the journalists.

In the southern Tamil Nadu state, Andrew Sam Raja Pandian, a digital journalist and founder of the SimpliCity news portal, was arrested on April 18 for publishing two news articles related to COVID-19. Pandian and his colleague, Jerald Aruldas, were held by police for reporting about the alleged government corruption amid the pandemic and how doctors faced food shortages while working during the lockdown.

"They tried to intimidate us. Journalists are afraid of covering any news related to COVID-19," said Aruldas.

"It has become a crime to report honestly about coronavirus and the failure of the state. Investigative journalists are viewed as enemies by authorities. There are no checks and balances," Ravi Nair of the South Asia Human Rights Documentation Center told DW.

Journalists covering the pandemic say the media is being gagged and doctors are being forced to toe the government's line.

Freedom of expression under threat

"Journalists should not be the collateral victims of negligent behavior by authorities, who react by trying to silence the reporters who expose problems instead of trying to solve the problems," Daniel Bastard, the head of Reporters Without Borders' (RSF) Asia-Pacific desk, said in a statement.

RSF also cited the case of Dhaval Patel, editor of the Face of Nation news website, who was arrested last month on charges of sedition over an article suggesting that Prime Minister Narendra Modi's BJP was planning to remove Vijay Rupani as Gujarat's chief minister amid disquiet about the surge in coronavirus cases in the state.

The Committee to Protect Journalists has urged Indian authorities to stop assaults against journalists and allow them to work freely.

UN High Commissioner for Human Rights Michelle Bachelet expressed alarm at the clampdown on freedom of expression in parts of the Asia-Pacific region during the COVID-19 crisis, saying any action to stop the spread of false information must be proportionate.

Bachelet listed India among the 12 countries in the region that has seen a tightening of censorship along with the arbitrary arrests and detention of people critical of the authorities' response to the pandemic.