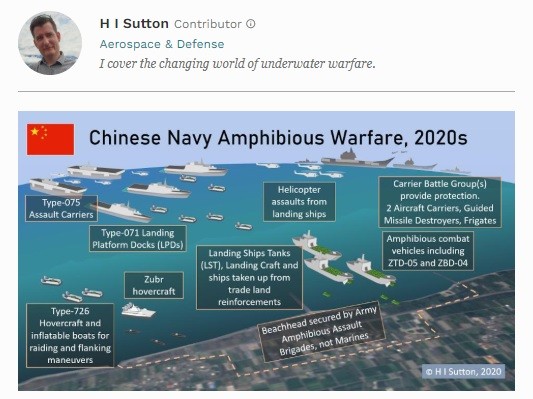 TAIPEI (Taiwan News) — A day after the 76th anniversary of the Normandy landings of WWII, Forbes published an article outlining the armada that China has already amassed for a potential future invasion of Taiwan.

In the article, titled "If China Invades Taiwan, This Is What The Fleet Could Look Like," H.I. Sutton, a defense analyst and expert on underwater warfare and submarine technology, breaks down the People's Liberation Army Navy (PLAN) flotilla that has been assembled over the years for a future invasion of Taiwan. In the analysis, Sutton itemizes the major weapons in China's war chest that would be employed during an amphibious assault on Taiwan's shores.

Sutton starts off by pointing out that unlike a quarter-century ago during the Third Taiwan Strait Crisis, China now has two aircraft carriers, the Liaoning and Shandong, both of which are reportedly going to be deployed in waters near Taiwan as part of its war games in August. The carriers, which are based on the same Soviet template, are escorted by China's Type 052C destroyers fitted with Aegis-type radars and technology. The analyst asserted that China's modern destroyers and frigates are now "well-defended enough" to be able to circle to Taiwan's Pacific side. He claimed that China's submarines, the most numerous in the world, can also now circle to waters off Taiwan's east coast, making it more difficult for the Taiwan Navy to outflank a would-be invasion task force.

He wrote that the two carriers would likely sit far out of harm's way, but unlike previous wars that involved flattops, their locations would likely be known at all times due to Open-source Intelligence (OSINT) via commercially available satellites. Even before such an invasion fleet left port, preparations on land via OSINT would be easily observable, with Taiwan being able to see indications 90 days, minimum, in advance of the invasion, according to Ian Easton, a research fellow at the Project 2049 Institute.

Sutton stated that the workhorse of an invasion would be Type 071 Yuzhao class Landing Platform Docks (LPDs), which can launch hovercraft and helicopters to ferry troops to the shore from a much greater distance than landing craft seen in previous wars, such as WWII. These LPDS would be supported by Type-075 assault carriers, which are similar in design and size to U.S. Navy Wasp-class and America-class amphibious assault ships.

Rather than marines, Sutton asserts that the main contingent of shock troops hitting the beaches would be soldiers from the People's Liberation Army's (PLA) amphibious assault brigades. He said they would most likely be favored because of their stock of amphibious tanks and troop carriers.

He said that even main battle tanks would likely be a part of the first wave. Subsequent waves could continuously be ferried to the beachhead by the Soviet-designed Zubr-class of air-cushioned landing craft (LCAC). However, Sutton cites military analyst B.A. Friedman as saying that a Chinese invasion of Taiwan would be far more difficult than the D-Day invasion: "Taking Taiwan would be one of the most difficult amphibious operations in history, if not the most difficult. Taiwan has had decades to prepare. Every landing spot is planned and the defensive plans are dialed in.” Friedman believes that in theory, China has the inventory in place to launch an invasion, but he questions whether the PLA has the knowledge and willpower to pull off such a high-risk operation.

Unlike the D-Day invasion, given modern satellite technology and social media, China would not have the element of surprise, giving Taiwan plenty of time to prepare its defenses. In addition, current information technology would result in an attack that was essentially broadcast live to the world.

This could have propaganda advantages if the battle goes in China's favor. Any stiff resistance by Taiwanese forces, however, could cause a major loss of face for the CCP regime. As Sutton points out, the longer Taiwan is able to fend off invading communist troops, the more likely it is that major powers such as the U.S. and Japan would come to Taiwan's aid, possibly turning the tide of the war. Sutton closes by warning that although the U.S. fleet of submarines could threaten China's carriers, the PLAN has already amassed an armada that is "already overtaking many more established navies."