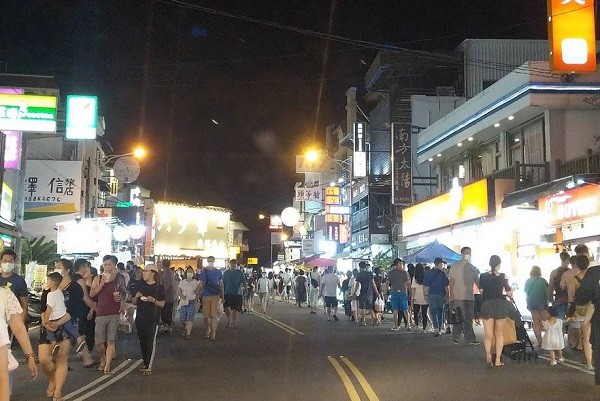 TAIPEI (Taiwan News) — Over 20,000 vehicles and 500,000 visitors flooded into southern Taiwan's resort town of Kenting over the weekend as the Central Epidemic Command Center (CECC) lifted many epidemic control restrictions.

During his daily press conference on Sunday afternoon, Minister of Health and Welfare and CECC head Chen Shih-chung (陳時中) announced that as the country had successfully surpassed 56 days, the equivalent to four incubation periods for the Wuhan coronavirus (COVID-19), the CECC was easing a number of its epidemic prevention measures that day as scheduled. In anticipation of this, half a million Taiwanese flocked to Kenting, restoring visitor numbers to pre-pandemic levels.

According to the Ministry of Transportation and Communications' Directorate General of Highway (DGH) and police data, 27,000 cars headed south on Provincial Highway 1 to Kenting in Pingtung County and to Taitung County on Saturday (June 6), reported Liberty Times. Some 20,000 vehicles arrived in Kenting and the Hengchun Peninsula from Saturday to Sunday.

On Saturday alone, the Hengchun Peninsula and Kenting saw the arrival of 13,000 vehicles. According to the DGH, Kenting saw a total of 500,000 visitors over the weekend, marking the first time crowds of that size had been seen since the pandemic began.

Due to bad publicity stemming from complaints online about price gouging in its night market and hotels, Taiwanese tourists have shunned Kenting in recent years. Over the past six or seven years, travel to Kenting by Taiwanese steadily dropped, while arrivals from Hong Kong, Macau, and China rose.

Taiwan has not yet opened its borders to foreign tourists, and many overseas destinations are still heavily impacted by the pandemic. Therefore, the vast majority of travelers to Kenting over the weekend were Taiwanese citizens.

During the Tomb Sweeping Day vacation in April, when the CECC issued a nationwide alert, occupancy rates at hotels in Kenting plummeted to 10 percent. However, as the country has gone eight weeks without a new local coronavirus case, occupancy rates have risen to 60 percent.

However, these bookings are mainly concentrated on weekends. Now that many epidemic control restrictions have been rolled back and the summer vacation nears, local hoteliers anticipate a boom, including on weekdays, in the coming months.