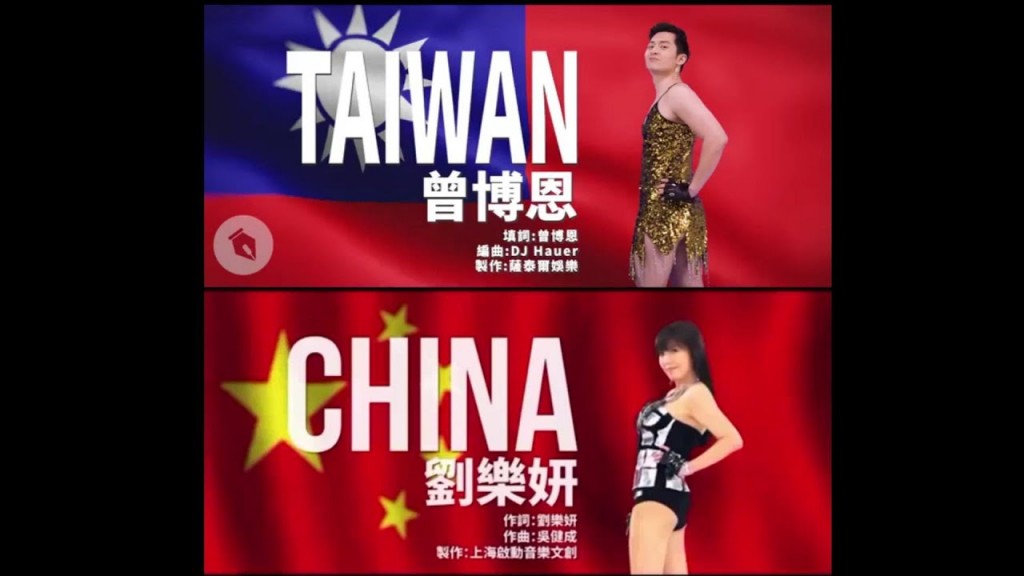 TAIPEI (Taiwan News) — A Taiwanese comedian's response to a music video that boasted of the advantages of China has outstripped the number of views of the original by nearly five to one.

On May 14, Taiwanese singer Fanny Liu (劉樂妍) posted a music video titled "China," in which she sang and praised life in the communist country, gaining 1,388,556 views and 3,800 likes. However, it also drew 72,000 dislikes by viewers who found the video distasteful.

The next day, Taiwanese comedian Brian Tseng (曾博恩) teamed up with DJ Hauer and uploaded his aptly titled "Taiwan," in which he countered by highlighting the negative aspects of China and repeatedly used terms banned by Beijing. As of publication, the video had garnered 5,359,473 views, 238,000 likes, and only 6,100 dislikes.

In the Liu video, which is directed at a Taiwanese audience, as it uses traditional Chinese characters, she lists all the provinces of China and holds a miniature Taiwan in her hand before it is added to a map of the communist state. As she stares enthralled by the map, a muscular man plucks tiny Taiwan from her hand and she glares back at him out of frustration.

She then starts repeating single Chinese characters to represent modern conveniences in China, such as "支" for Alipay (支付寶) for digital payment, "機" for mobile payment (手機付費) and "宅" for home delivery (宅急送), which are all so "方便" convenient. She sings that because she has all these conveniences, she is happy wherever she lives in China, including "Taiwan Province."

The repetitive song assaults the listener with the same "innovations" allegedly unique to China for three verses. Towards the end, Liu then repeats "路" as in high-speed rail (高速鐵路), "單" as in shared bikes (共享單車), online shopping (網上購物), and again exclaims how convenient it all is.

Tseng prefaces his video by making it clear that it is a parody of Liu's work, "a pro-China song" that praises the country and asserts that Taiwan is a province. According to Tseng, Liu was born and raised in Taiwan, but after she went to China to seek her fortune, she has "always made pro-Chinese speeches" while she still "enjoys the social welfare of Taiwan."

Instead of Chinese provinces, Tseng's version starts off with the cities and counties of Taiwan. Then Tseng, who is wearing a dress, can be seen holding a miniature map of China and staring at a large map of Taiwan before a muscle-bound man snatches it away.

Tseng then replaces the conveniences Liu had rattled off with incongruent words including, "台" as in Taiwan or the phrase "tight" from the TV show "Breaking Bad," "積" for the Taiwanese chipmaker TSMC (台積電), and "門" as in bathroom door (廁所門), to mock the poor sanitation in Chinese toilets, and "品" as in good taste in music (音樂好品味), which Liu claimed she had to the disagreement of netizens. He mocks Chinese Taipei, the name of Taiwan's Olympic team, then lists Chinese cities using the same naming convention including Chinese Beijing, Chinese Shanghai, and Chinese Tianjin.

Like Liu, Tseng sings that he is happy to live anywhere, with the exception of Miaoli County, probably because of its history of corrupt Kuomintang (KMT) politicians. He then repeats the word "蛋" as in tea egg (茶葉蛋) because many Taiwanese think that lower-class Chinese are so poor they cannot afford tea eggs.

To further enrage the Chinese government, Tseng then chants the number "six" in reference to the Tiananmen Square massacre that took place on June 4, 1989. Tseng then breaks another strict taboo in China by repeating the word "法" for Falungong (法輪功).

Finally, he takes a direct jab at Liu by repeating the word "舔" meaning "lick" to refer to a few Taiwanese entertainers who speak out in favor of the CCP. Tseng closes by adding a few more last-minute shots such as Made-in-Taiwan masks, the right to vote, no suddenly disappearing dissidents, and no fear of having one's organs harvested while still alive.

After Tseng's video appeared, the song's writer Wu Chien-cheng (吳健成) accused him of copyright infringement. However, Tseng's company STR Network responded by saying that the work is a form of political expression covered by the right to freedom of speech and that will not take the work down. The company said it would donate profits from the work to charity.


The following is a simultaneous comparison of both videos: