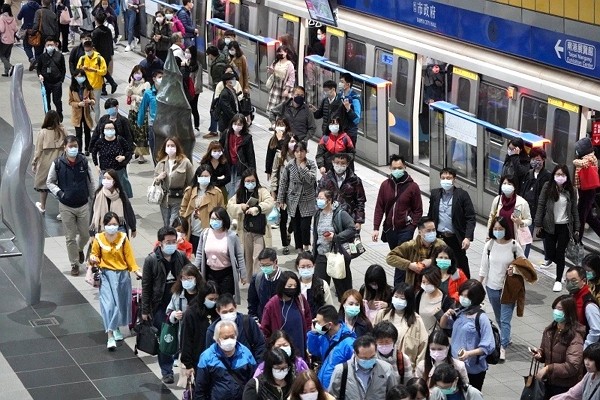 COVID-19 has cost the United States more than 105,000 lives and over 40 million jobs. Experts predict that by August as many as 150,000 Americans will have died from the disease and the nation’s unemployment rate may surpass 20 percent. By contrast, Taiwan has seen just seven deaths, even though the country was at significant risk due to its high population density and geographic proximity to China.

Why was Taiwan ready to respond to the novel coronavirus while so many other countries — including the U.S. — were unprepared? The answer to this question lies in Taiwan’s national security policy, as much as its public health practices.

While public health and national security might initially seem like unrelated fields, the Taiwan government considers them linked policy responsibilities. This is a relatively new perspective that arose out of Taiwan’s experience with the SARS epidemic, which in 2003 caused almost 700 infections in Taiwan.

SARS’ initial rapid spread across Taiwan resulted in significant alarm among the country’s population. Fortunately, the disease was not as easily transmissible as COVID-19, and Taiwan was able to recover quickly.

However, the SARS epidemic revealed a national security threat that went beyond public health: namely, the economic and social dislocation caused by an infectious disease outbreak could be exploited by a foreign adversary — the Chinese Communist Party (CCP).

Taiwan lives under constant pressure from China, which considers Taiwan part of its sovereign territory. After SARS, the Taiwan government realized that a serious epidemic could cause social, economic, and psychological disruptions among its people. Furthermore, China might seek to exploit the chaos.

At the very least, China could use the disorder caused by an epidemic in Taiwan to implement information and economic warfare campaigns to demoralize and divide the population. This could weaken public support for Taiwan’s democratic institutions.

At worst, China might seek to use the turmoil caused by a severe epidemic to carry out a military strike against Taiwan. While this may seem an unlikely possibility, consider that during the current COVID-19 pandemic China has conducted 10 separate military exercises near Taiwan.

These include deliberate incursions into Taiwanese airspace. Also, prominent figures linked to the CCP have mentioned “reunification by force” in public statements.

SARS forced Taiwan to learn a hard lesson: the country would be vulnerable to China should a deadly pathogen spread across the island nation. Determined to protect its people, Taiwan prepared for the next infectious disease outbreak.

In January 2020, Taiwan’s preparations paid off. When COVID-19 emerged, the country’s precision testing, tracking, use of big data, and quarantine procedures enabled it to successfully contain the virus within its borders.

Like Taiwan in 2003, the U.S. is now learning its own difficult lesson. While most public discussion about COVID-19 centers on the disease’s public health and economic consequences, the pandemic’s effects will have ramifications that influence American national security.

Like Taiwan, the U.S. must come to understand the close connection between public health and national defense.

The U.S. faces an international security landscape fraught with challenges, since China seeks to realign the existing global order. Russia interferes in American elections and works to destabilize Eastern Europe.

North Korea brandishes its nuclear might, while Iran strives to acquire nuclear weapons and export fundamentalist revolution across the Middle East. Meanwhile, extremist groups like Islamic State continue to carry out terrorist attacks against U.S. interests.

If the U.S. does not mitigate the COVID-19 pandemic at home, it will struggle to address its many challenges abroad. Budget resources that would normally go toward national defense and diplomacy will be reduced as the economy shrinks.

Allies may question the U.S.’ ability to fulfill its security and treaty commitments. Meanwhile, domestic social divisions exacerbated by the politicization of the virus may weaken America's democratic institutions and its enemies may take advantage of these contingencies should they come to pass.

While COVID-19 has already disrupted the American economy and caused widespread suffering, the U.S. is resilient and can overcome the pandemic through the application of sound, science-based policies. If the Trump administration truly seeks to keep the American people safe from foreign threats, it must adopt the recommendations of epidemiologists and medical professionals to contain the spread of the virus in the homeland.

Equally important, the federal government should develop policies to more successfully manage future outbreaks. Scientists warn that COVID-19 is unlikely to be the last deadly infectious disease that strikes over the next several decades.

SARS, MERS, Ebola, and Zika have all emerged as serious regional or global challenges in recent years. The U.S. must be ready for COVID-2027, COVID-2035, or any other virulent pathogen that surfaces in the future.

Additionally, the significant economic and social disruptions caused by COVID-19 in the U.S. may rekindle the interest of extremists in acquiring biological weapons of mass destruction. Recent advances in synthetic biology have made obtaining and altering dangerous pathogens cheaper and more feasible than in the past.

The U.S. government prepared for potential smallpox and anthrax attacks after September 11; however, more resources should be provided to the Centers for Disease Control, Federal Emergency Management Agency, and The Biomedical Advanced Research and Development Authority to prepare for future biological terrorist threats.

Taiwan learned and applied its lesson from the SARS epidemic and successfully contained COVID-19 within its borders. In doing so, the Taiwan government helped secure its people from the unwanted influence of a foreign adversary.

If the U.S. government seeks to protect the American people, the first step is stopping the spread of COVID-19 at home. Until that happens, America’s enemies will exploit the social and economic suffering caused by the coronavirus.