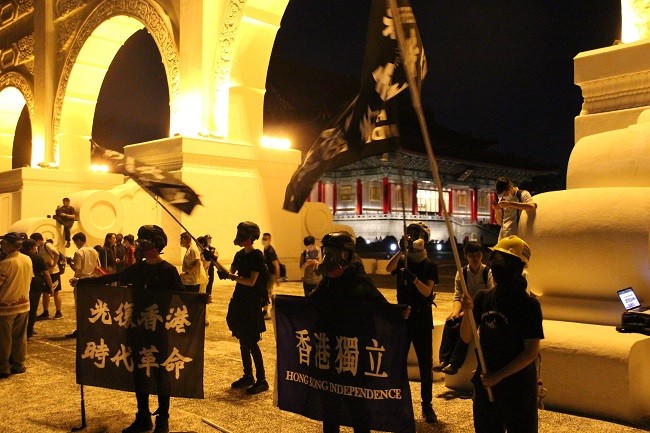 TAIPEI (Taiwan News) — As thousands in Hong Kong turned out to commemorate the anniversary of the Tiananmen Square massacre in defiance of a city-wide ban on such gatherings, their countrymen in Taipei joined Taiwanese to remember the pro-democracy activists who lost their lives in Bejing 31 years ago.

Several hundred gathered at Liberty Square west of National Chiang Kai-shek Memorial Hall. The vigil began with a moment of silence at 8 p.m., followed by speakers and the lighting of candles (and smartphones) to mark the atrocity.

In contrast to last year's 30th-anniversary memorial, which was several times larger and saw the participation of NGOs and government officials, including then-Vice President Chen Chien-jen (陳建仁), this year's was relatively low-key. Rousing, lengthy speeches were replaced with singing, slogans, and acoustic music.

Event organizer Edith Chung (鍾慧沁) said this was by design: "I do not belong to any organization; I just want everyone to come individually." Chung, a Hong Kong native who owns a restaurant in Tainan, also spoke at the 2019 memorial but told Taiwan News that there had been "too much talking." Just like the fluid, leaderless movement at the heart of the months-long protests, Chung said she wanted this memorial to be a place where attendees could sing, talk, and express themselves with their own free will, the "spirit of a social movement," rather than an opportunity for political parties to promote themselves. She had initially expected only a handful of friends to come and was pleased with the turnout.

While those who gathered reflected on a bloody chapter of history, the atmosphere on the square was imbued with the sobriety of the present as much as with the tragedy of the past; Hong Kong loomed large.

Earlier that day, pro-CCP legislators in Hong Kong had pushed a bill through making disrespect to the Chinese national anthem punishable by up to three years in jail. And just two weeks earlier, China's rubberstamp congress bypassed Hong Kong's legislature to approve a bill to prosecute those deemed guilty of subversion, terrorism, foreign interference, or separatism — with ominous implications for the city's protesters, whom Beijing has referred to as "rioters" and "thugs" and likened to terrorists.

With heavy-handed legislation as a backdrop and a ban on large gatherings firmly in place, Hongkongers nevertheless descended on Victoria Park, the traditional site of the world's largest memorial for the 1989 massacre.

Meanwhile, in Taipei, Cantonese could be heard wafting through the air as youthful, gas mask-clad veterans of Hong Kong's protests waved the black flags of the pro-democracy movement, cutting a striking contrast against the bone-white west gate of the hall. Returning to the city is no longer an option for them.

This was echoed by another Hong Konger, a 22-year-old student who called himself Boris, who said he had come out because he believes "people who sacrificed for freedom and democracy should all be commemorated, especially when they are facing a common enemy, that is, the Chinese Communist Party." 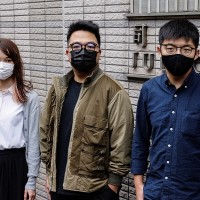