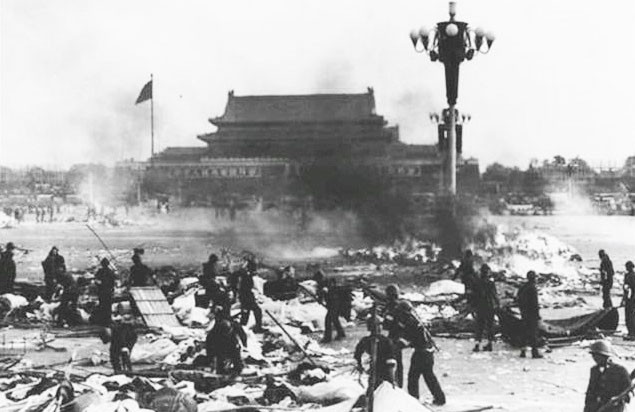 TAIPEI (Taiwan News) — On the eve of the 31st anniversary of the Tiananmen Square massacre, Taiwan's Mainland Affairs Council (MAC) called on China to issue an apology for the incident, but Beijing quickly dismissed the idea.

On Wednesday (June 3), the MAC issued a statement in which it called on China to re-examine the "historical truth" of the incident and issue a "sincere apology." That same day, Chinese Foreign Ministry spokesman Zhao Lijian (趙立堅) swiftly rejected Taiwan's proposal as "nonsense."

Thursday marks the 31st anniversary of the Tiananmen Square Massacre in which thousands of civilian democracy protestors were gunned down in the streets of Beijing by Chinese troops on June 4, 1989. As has been the case since the bloody crackdown, China suppresses any acknowledgment of the incident, while this year Beijing-selected officials in Hong Kong have banned a traditional vigil for the first time in 30 years.

In a statement directed at the Chinese Communist Party (CCP) leadership in Beijing, the MAC reminded the world that Chinese people were "fighting for democracy and freedom in Tiananmen Square in 1989," but Chinese communist authorities "used force to silence the people." The council then called on Chinese officials to "face up to the expectations of the people for freedom and democracy, start political reforms in accordance with democratic and just procedures at an early date, and reassess the historical truth and sincerely apologize."

It asserted that the "one-party dictatorship" in Beijing has "long lacked a concept of governing that is consistent with universal values." The MAC then mentioned China's persecution of ethnic minorities in Xinjiang, religious groups, dissidents, and pro-democracy protesters in Hong Kong, the latter of whom will soon be subject to a new draconian security law.

The statement added that "We believe that those currently in power should have the courage to correct mistakes, immediately initiate reforms and return power to the people." The MAC then pointed out that in her inaugural speech, President Tsai Ing-wen (蔡英文) reiterated that "peace, reciprocity, democracy, and dialogue" are the keys to better interaction between the two sides of the Taiwan Strait.

During a press conference that same day, Zhao quickly brushed off Taiwan's call for an apology by saying, "The relevant remarks of the Taiwan authorities are totally nonsense. As to the political disturbance in the late 1980s, China has drawn a clear conclusion." Glazing over numerous catastrophic failures by the CCP since it seized Beijing in 1949, such as the Great Leap Forward, the Great Chinese Famine, the Cultural Revolution, and the botched handling of the 1976 Tangshan Earthquake, Zhao added: “The great achievements after the founding of new China fully demonstrate that the development path chosen by the new China is totally correct and in line with China’s national conditions.”