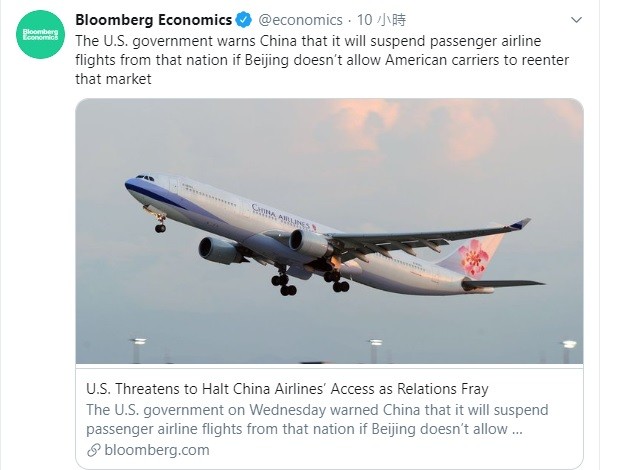 On Wednesday, Bloomberg published a report on Trump's decision to ban all flights by Chinese airlines to and from the U.S. beginning on June 16. Unfortunately, Bloomberg bungled the top photo in the article by displaying an image of a CAL jet taking off, giving the erroneous impression that Taiwan too, was somehow included in Trump's flight ban.

The incident is the latest episode of foreign organizations confusing Taiwan's flagship carrier with a communist Chinese counterpart. In recent months, as Taiwan has embarked on its "mask diplomacy" campaign to deliver quality, Made-in-Taiwan medical supplies to countries hit hard by the Wuhan coronavirus (COVID-19) pandemic, citizens in the recipient countries are often befuddled by the massive "China" painted on the fuselage.

On Feb. 3, pro-Taiwan independence group Taiwan Republic Office (台灣國辦公室) called for the national airline's name to be changed to "Formosa Airlines" (福爾摩沙航空) or "Yushan Airlines" (玉山航空). Similarly, on Feb. 20, the Taiwanese American Senior Society - East Bay & Washington DC launched a petition on the U.S. website Change.org calling for the name of the national carrier to be changed to "Taiwan Airlines."

As public support for a new name has increased, Minister of Transportation and Communications (MOTC) Lin Chia-lung (林佳龍) on April 11 stated he had an "open mind" toward calls to change CAL's name amid the pandemic, but he expressed concern about aviation rights. However, Huang Chu-cheng (黃居正), a professor at National Tsing Hua University's Institute of Law for Science and Technology, said that changing the name should not affect aviation rights, as the naming issue has not been expressly addressed in air rights accords.

Democratic Progressive Party (DPP) legislator Lo Chih-cheng (羅致政) in mid-April called for the MOTC to launch a task force to implement the name change, while New Power Party (NPP) legislator Chiu Hsien-chih (邱顯智) proposed creating a holding company to manage the airline and enable it to fly under the name "Taiwan."

Netizens on Twitter swiftly spotted Bloomberg's blooper and criticized the news outlet for botching the photo:

"China Airlines is actually a Taiwanese Airline. Not from China. Air China is...."

"China Airlines (photo) is a Taiwanese carrier ... come on, Bloomberg, do your research."

Users of the social media site Reddit said the incident was illustrative of the need to change the name:

"That’s the reason why the airline should be renamed. The NPP already raised this opinion, according to their polls majority supports renaming. While all the aviation is grounded, it’s a good time to change aircrafts’ liveries."

"Well, the sooner China Airlines change their name to Taiwan Airlines, the better for everyone's sanity. It's a no brainer that the name is looked at first by other countries and individuals, who don't know much about Taiwan."

On Thursday (June 4), Bloomberg acknowledged the mistake and wrote that it had removed the photo of the CAL jet because it "doesn’t represent an airline impacted by the U.S. action." However, at the time of publication, Bloomberg's blunder still appears on its Twitter feed.

The U.S. government warns China that it will suspend passenger airline flights from that nation if Beijing doesn’t allow American carriers to reenter that market https://t.co/KI1UsGYRKO