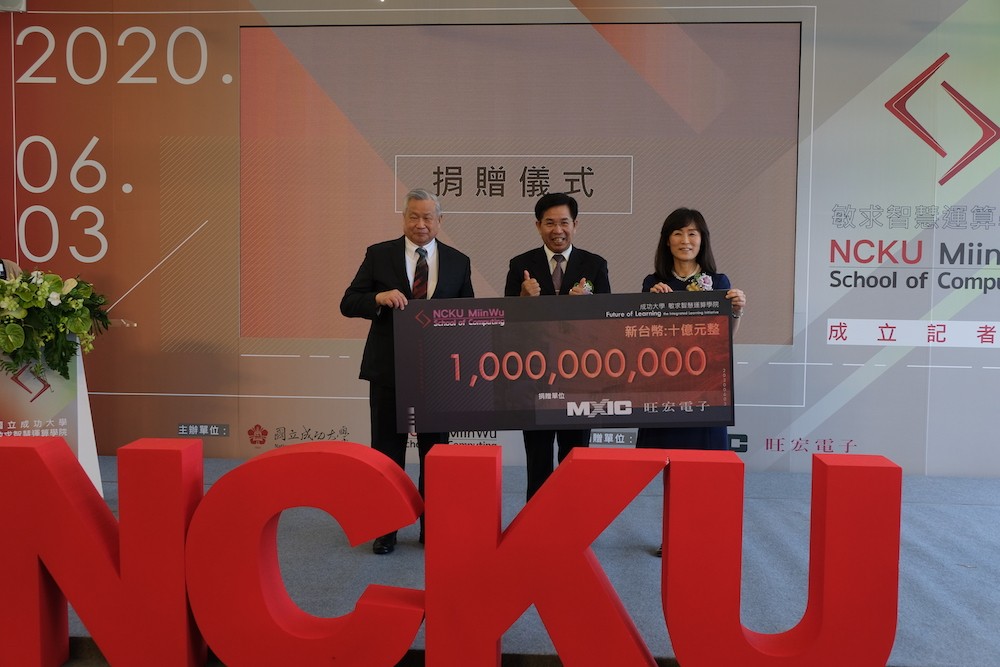 The Cheng Kung Innovation Center – Macronix Hall will serve as an "open platform" that encourages the convergence of various academic disciplines, remarked NCKU President Jenny Su (蘇慧貞) at the press event. Students from NCKU's nine colleges will "share and make use of the platform, and hence benefit from the platform altogether," she added.

Speaking on the goal of the Miin Wu School of Computing, Su said the school intends to be very flexible in terms of recruiting faculty members and evaluating student performance. "NCKU is willing and will endeavor to foster next-generation talent for the country and even for the world," stated the president. The plan to build the four-story innovation center began taking shape last year after Macronix, a leading Taiwanese company providing non-volatile memory solutions, made a donation of NT$420 million (US$13.8 million) to the university. The Miin Wu School of Computing, which will be located in the third floor of the innovation center, is thus named after Macronix's chairman Miin Wu (吳敏求), who is also an NCKU alumni.

Wu declared on Wednesday that in addition to the donation made last year, the company will provide NT$100 million annually to the school of computing over the course of the next 10 years. The funding should be allocated to recruit the best professors from around the world, said Wu, stressing that he values quality over quantity: "the professors must be top-notch."

The application of big data and artificial intelligence to semiconductor manufacturers will be even more imperative in the near future, noted Wu. Such an insight propelled Wu to support the formation of the school of computing, and he expressed hope that the institution will spur industrial innovation in Taiwan. Education Minister Pan Wen-chung (潘文忠) pledged the ministry's support for NCKU. The university has taken "a very important step" with regard to developing the student skills needed by industry and strengthening the connection between academia and enterprise, Pan added. The school of computing will provide bachelor's and master's credit and degree programs, with interdisciplinary courses on electrical engineering, computational science, data science, statistics, and mathematics, among other fields, said NCKU. All the courses from the school of computing will be accessible to NCKU students regardless of their majors.

After more than one year of preparation, the innovation center will complete its construction next year. The school of computing, whose courses will be designed and given by 20 professors across NCKU's different colleges as well as from overseas, will start accepting admission applications later this year. In addition to the headquarters of the school of computing, the 0.2-hectare innovation center will include conference and exhibition halls at the ground floor, according to information provided by the firm Bio-architecture Formosana. The first and second floor of the building will be reserved for teaching and networking spaces.