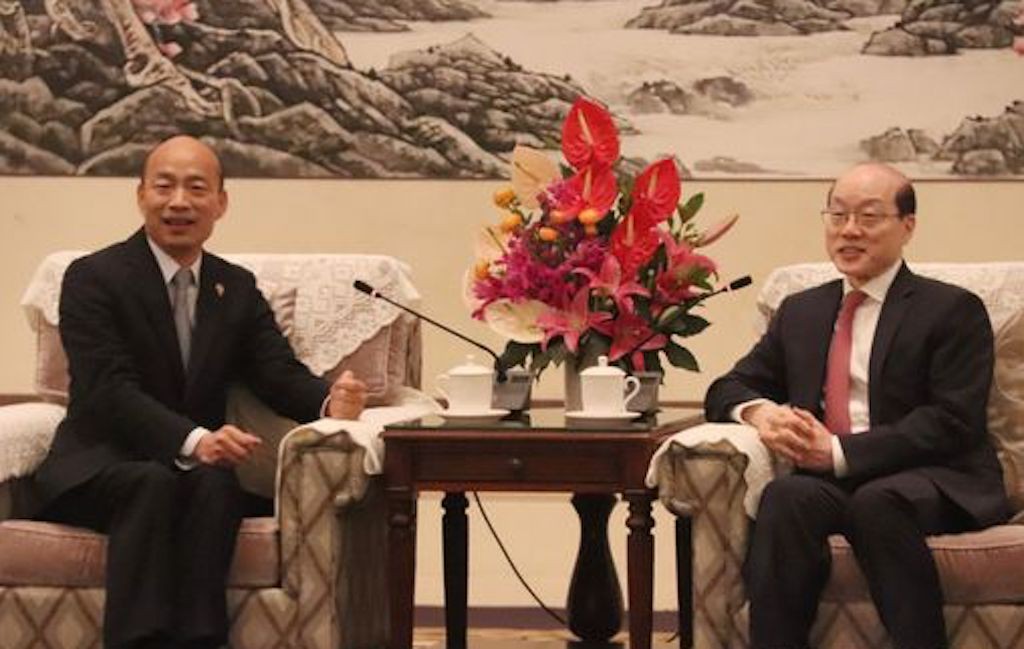 KAOHSIUNG (Taiwan News) – This Saturday (June 6), hundreds of thousands of Kaohsiung citizens will head to their local polling station to vote out one of the most catastrophic, underachieving mayors in Taiwan’s short democratic history.

Han Kuo-yu (韓國瑜) has consistently embarrassed both the city, the office of mayor, and himself in the 18 months he has held office. He has also shown his utter contempt and disregard for the people of Kaohsiung by taking a four-month holiday to try and secure another job.

The people of Taiwan roundly rejected his candidacy to be president. Come Sunday morning, he could be out of a job altogether and back in the political wilderness where he belongs.

Few people in Taiwan would be sad to see the back of him. But quite a few people in communist China will be. If his utter dereliction of duty as Kaohsiung mayor isn’t enough to get people out to vote against him, his highly dubious links to the biggest threat to Taiwan’s national security should be.

Han has long been known as a pro-China politician. However, the extent of his links to the Chinese Communist Party (CCP) have been consciously obfuscated by his supporters.

During the mayoral elections it was clear there was a tsunami of fake news emanating from China that was successful in convincing a great many voters to support him. There were also rumors of Chinese financial support, but at the time little concrete evidence to support these suspicions.

This is no longer the case. It has been revealed by Chinese whistleblower Wang Liqiang (王定宇) that donations totaling at least NT$20 million were funneled through the KMT to Han’s campaign from CCP sources.

So, from the very start, Mayor Han has been in the pocket of the CCP.

Han has not exactly been an active mayor, but one of the few things he has managed to do since being elected is visit communist China. He did this less than two months after being inaugurated as mayor.

What did he do while he was there? Was he building trading relations with China, or seeking investment to improve the lives of Kaohsiung's people?

No. Instead he held unscheduled and off-the-record meetings with officials from the CCP’s Taiwan Affairs Office. He openly stated his support for the CCP’s fictitious "1992 consensus" and returned to accusations that he was attempting to sell out Taiwan to the CCP.

Han’s links to China stretch back far before his campaign to be Kaohsiung mayor and even further than his short stint as a KMT legislator. He studied for a PhD at Beijing University, spending eight long years living in the Chinese capital.

In an ironic twist, his doctoral thesis appears to have been on the topic of petitions to remove people from public office. This is something he is about to get first-hand experience of.

Even more suspicious is the fact that he failed to declare that he had lived and studied in China for eight years when running to be president (or for that matter Kaohsiung mayor). As a presidential candidate, Han was required to reveal his education, experience and political opinions.

Concealing the time he spent living in Beijing appears to be a breach of these rules. Why was Han so insistent that his time in Beijing was hushed up?

'Pull in and fight out'

Han's policies while mayor appear influenced by CCP policies, too. His economic slogan, "Pull in and fight out" (拉進來,打出去) is worrying close to one used by CCP dictator Mao Zedong in the 1960’s ahead of his brutal "Great Leap Forward," which cost millions of lives.

Meanwhile, Han’s attempts to frustrate the democratic will of the Kaohsiung people by blocking and undermine the recall vote bear close resemblance to the way the CCP attempts to stifle any opposition to their policies.

One expert has compared his approach to the way the CCP brainwashes the Chinese people to support its agenda.

The outbreak of Wuhan coronavirus around the world led many countries into a rapid reappraisal of their relations with the CCP.

But the CCP appears to be using the pandemic as an opportunity to assert its political will while the focus of the world is elsewhere. Its National Security Law imposes draconian new controls over Hong Kong, is a flagrant breach of international law, and also signals the final nail in the coffin of the "one country, two systems" myth.

Kaohsiung as a gateway

The question now is whether China will stop there, or whether it intends to assert a false sovereignty claim over Taiwan too. Give the regime's recent erratic behavior, you wouldn’t put anything past it, and military exercises that appear focused on Taiwan have stepped up this year.

This is why it is more important than ever before that Taiwan’s second city and its largest port is not in the hands of a CCP sympathizer. If China was to invade Taiwan, Kaohsiung would be a great place to start and this could prove much easier if the city was in the hands of someone who was disinclined to stop them.

When Han’s presidential bid was snuffed out earlier this year, the CCP lost its last real chance of getting a pro-unification candidate into the Presidential Office. But as long as he remains in control of Kaohsiung, he remains a useful CCP pawn and still poses a major threat to Taiwan’s national security.

If Han’s dismal record as mayor is not enough to persuade the people of Kaohsiung to vote to recall him this Saturday, then his close ties to Taiwan’s greatest geopolitical threat should be.

Han Kuo-yu poses a significant national security threat to Taiwan because of his links to the CCP. That alone is good enough reason to vote him out of office on Saturday.