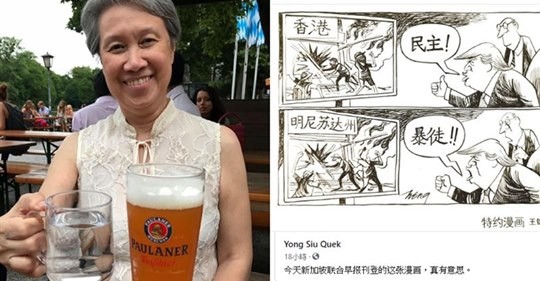 TAIPEI (Taiwan News) — Singapore first lady Ho Ching (何晶) has yet again drawn the ire of Taiwanese after she shared a cartoon that depicted Trump as supporting the Hong Kong protesters while condemning those in Minneapolis.

Ho first raised hackles in Taiwan in April when she seemed to express disdain that Taiwan was donating 100,000 medical masks to Singapore by sharing the news and writing "Errrr." She later modified the post to offer thanks to Taiwan, only to stir more controversy by sharing a video of a talk show hinting at deteriorating Singapore-Taiwan relations two days later.

This time, on Monday evening (June 1), Ho shared a cartoon from Singapore's Lianhe Zaobao showing people in Hong Kong smashing a shop window and Trump exclaiming "democracy!" In the next frame, the same number of persons can be seen smashing a storefront in Minnesota, with Trump shouting "thugs!"

The Chinese Communist Party (CCP) has been quick to take advantage of the protests over the death of African American man George Floyd after a white Minneapolis police officer knelt on his neck for nearly nine minutes. Chinese propaganda now seeks to equate the events in Minneapolis and Hong Kong, depicting both as anarchistic behavior and pointing to Trump's iron-fisted response in the U.S. as a vindication of their own crackdown in Hong Kong.

Chinese propagandists claim that Trump is being hypocritical for berating China for its new draconian security law aimed at the Hong Kong protesters while threatening to impose martial law in his own country. The propaganda is a classic example of whataboutism: using the problems in the U.S. to glaze over the fact that China's new law violates the Hong Kong Basic Law, the Sino-British Joint Declaration, and shatters the "one country, two systems" framework.

Taiwanese netizens shared Ho's post on the popular online message board PTT, where they criticized her for supporting the CCP's spin on the two unrelated situations:

"Errrr how dare you criticize your Dad?"

"Wife of the dictator of Singapore with a logic of zero."

"Little pinko who is loyal to the [CCP] party and patriotism."

"Really good at stealing concepts from others."