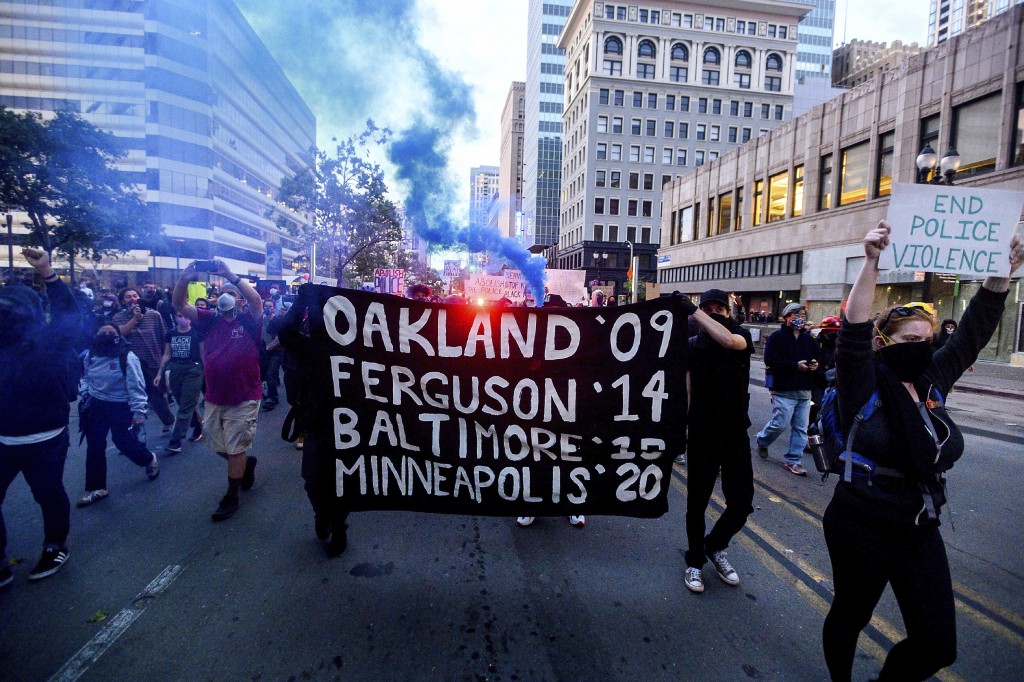 CHICAGO (AP) — In Baltimore, protesters shouted the name of Freddie Gray. In Topeka, Kansas, T-shirts were emblazoned with the name of Dominique White. In Tulsa, Oklahoma, people gathered in a spot where white mobs killed hundreds of blacks a century ago and chanted the name of Terence Crutcher.

Across the U.S. as protesters poured into the streets to voice anger about last week's death of George Floyd, they also marked the occasion with reminders that the handcuffed black man who pleaded for air as on officer pinned him to the pavement with his knee on his neck is simply the latest addition to a grim roster.

Their stories have substantial differences, but protesters used their names and faces on posters to drive home the point that Floyd is part of a larger story about the dangers of being black in the United States.

"George Floyd is causing people in their own communities to recall, reflect and then get angry all over again about their own police killings,“ said Marshall Hatch, a Chicago minister who eulogized Bettie Jones, who was struck by a bullet from an officer responding to a domestic dispute at a neighbor's house that also left 19-year-old Quintonio LeGrier dead in 2015.

Hatch said Floyd’s death has served as a reminder to continue to push for justice in deaths throughout the country. He said that on Wednesday, he and other religious leaders plan to gather outside police headquarters to demand the officer who was fired after fatally shooting Jones and LeGrier also face criminal charges.

“There is a lot of feelings of incomplete justice all over the country,” he said.

Allisa Findley, whose brother, Botham Jean, was killed in 2018 inside his apartment by a white Dallas police officer who said she mistook his apartment for her own told WFAA television in Dallas, "It is like pouring salt into an open wound every time there is another case.”

In New York, many protesters shouted, “I can’t breathe,” a reminder that the words Floyd said in his last moments of life echoed what Eric Garner, stopped by police in New York City’s Staten Island for allegedly selling untaxed cigarettes, said when a police officer put him in what appeared to be a chokehold in 2014.

One of the first things Chicago Mayor Lori Lightfoot said publicly about Floyd's death was that it brought back to her the pain that the city felt in 2015 when a video of a white police officer shooting black teenager Laquan McDonald was released.

In Oakland, California, protesters gathered at Oscar Grant Plaza, named for the 22-year-old who was pulled by police from a Bay Area Rapid Transit train early on New Year's Day 2009 and killed in one of the first police shootings captured on video by bystanders.

Grant's mother, Wanda Johnson, could not help but think of her son when she saw a bystander's video of Floyd's final moments.

“It brought back so many memories of them trying to demonize him, then trying to have other officers there and none trying to control the situation,” Johnson told KRON-TV in the Bay Area.

In Baltimore, it was impossible not to think of what happened in 2015 — from the death of 25-year-old Freddie Gray after he suffered major spinal injuries while being transported in a police van to the unrest that followed.

“It was a stark reminder of our own city’s trauma,” Baltimore Mayor Bernard C. “Jack” Young told the Baltimore Sun.

While Gray's name has remained part of the national conversation about police treatment of blacks, what has been striking is that demonstrations in every corner of the country tell their own piece of a larger story.

Terence Crutcher was fatally shot in 2016 by a white police officer, Betty Shelby, who was later acquitted of manslaughter.

“If you all could just scream at the top of your lungs and let Terence know that you still care, that you haven’t forgotten,” his twin sister, Tiffany Crutcher, told a Tulsa crowd.

Michael Ramos, described by friends and family as black and Hispanic, was fatally shot by Austin, Texas, police in April as the 42-year-old drove away from officers after first being shot with a beanbag. The shooting remains under investigation, and Ramos' mom, Brenda Ramos, questioned why the officer who shot him hasn't been arrested or at least suspended.

“Now I am in this terrible heartbreaking club," Ramos' mom, Brenda Ramos, told reporters over the weekend. "It's a club of mothers of black Americans who have been murdered by police.”

In Topeka, protests included the shouts of, “Say his name! Dominique White.” The 30-year-old Topeka man was armed when officers, responding to a report of gunfire, confronted him and fatally shot him in 2017. While an internal police investigation found the officers followed department policies, protesters still have questions, as do relatives who have filed a lawsuit.

In New York, Gov. Andrew Cuomo posted a slide with the names of many black men killed or abused by police in cities around the nation.

“You are blind, or in denial, if you are still treating each one like a unique situation,” he said at his Saturday morning press briefing. “How many times have we seen the same situation?

"Yes, the names change. But the color doesn’t.”