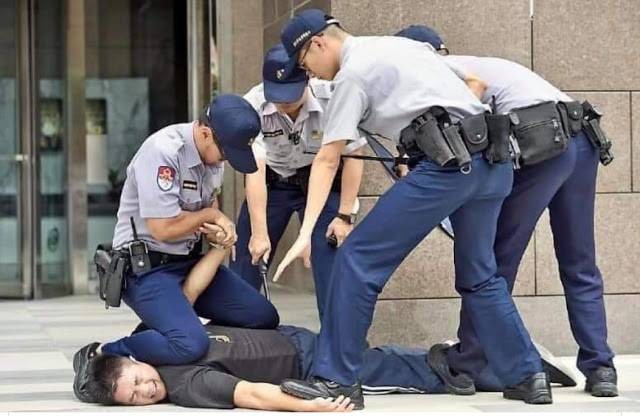 On Friday, the CIB announced the following six persons are being investigated for "malicious distribution of untruthful information on Facebook": Chi Ying Leung, Nancy Leung, Siu Ted Ted, Ken Lee, Zhi San Gao, and Ming So. The bureau alleges that these individuals posted the fake news on Facebook groups, such as "香港漢奸活動觀察小組 2.0" and "香港突發事件爆料區."

The false story included a photo taken on Sept. 25, 2018, of a drill held by Taipei Mass Rapid Transit (MRT) police rehearsing the subduing of a violent passenger. The suspects then wrote fictitious captions, such as "Taiwan black police taking away Hong Kong refugee from Taipei Main Station."

The position of one of the officers' knees over the simulated "suspect's" neck in the photo was clearly meant to harken to the incident in which a Minneapolis police officer placed his knee on George Floyd's neck for nearly nine minutes on May 25. The incident has since sparked outrage, protests, and riots in multiple cities across the U.S. over the past week.

The CIB alleged that most of the posts were uploaded by fake Facebook accounts and were intended to mislead readers with a false story about Taiwanese police arresting an "innocent refugee." Based on the Chinese characters and expressions used in the posts, investigators concluded that the authors of the posts were native Cantonese speakers, living either in Hong Kong or China. The bureau suspects that the posts were created to erode public confidence in the Taiwan government and to incite negative perceptions of Taiwan overseas. Most of the personal information in the bogus accounts lists the individual as supposedly living in or coming from Hong Kong.

All of the posts shared by these accounts take a clearly pro-China stance. The CIB believes that the accounts are fake because they were all created in May and have virtually no activity on their homepages.

In addition, according to Fact Check Report No. 487 posted on the Taiwan FactCheck Center website, the photo was actually taken by a Liberty Times reporter when reporting on a simulation exercise carried out by the Taipei MRT police. In addition, the uniform worn by the police is clearly the old version, with a gray top and dark blue pants.

The new uniform, which was adopted in April of last year, is solid navy blue from top to bottom and includes more pockets to carry equipment. Therefore, from the uniforms alone, it is clear that this photo is not of an incident that has taken place within the past 12 months.

Based on the suspiciously recent creation of the Facebook accounts, their use of Cantonese, and the clear political slant expressed by the users, the CIB determined that that the creators of the accounts are likely members of an "online Facebook army" based in China. The CIB said that the group specializes in collecting photos posted by Taiwanese media and adding false captions in an attempt to sway local and international opinion against the Taiwan government.