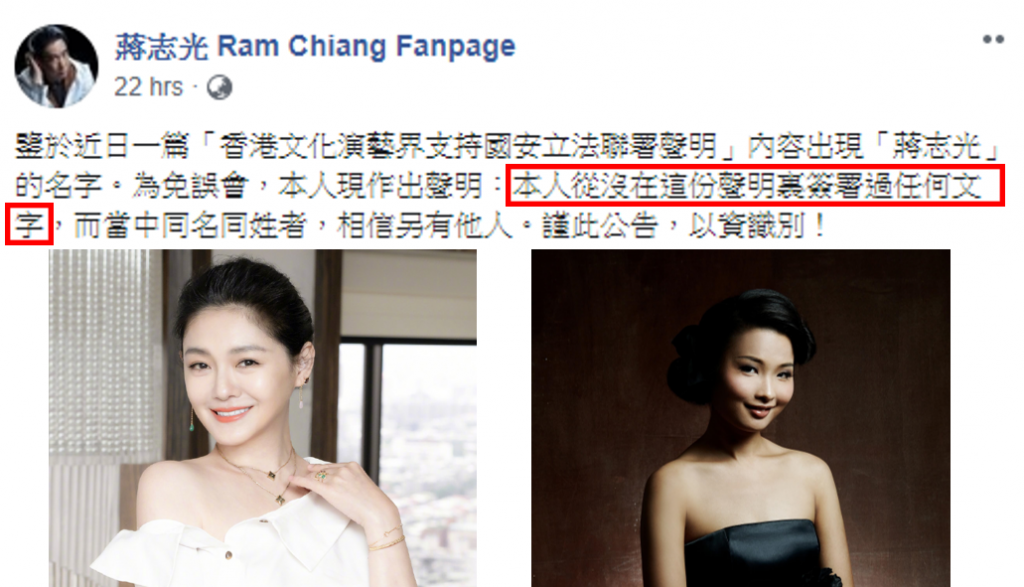 TAIPEI (Taiwan News) — An announcement claiming to represent the Hong Kong entertainment industry and listing 2,605 names in support of Beijing's new national security law for the territory has drawn accusations of forgery, with a number of supposed signatories denying they were ever even contacted.

Spearheaded by the famous pro-China actor, Jackie Chan (成龍), the open letter stated that the "Hong Kong entertainment industry firmly supports the decision made by the National People's Congress to protect the national security of Hong Kong. We wish Hong Kong society can use it as a turning point to return to the rule of law."

The long list of endorsements has raised eyebrows among the public, especially for its inclusion of artists who had never previously expressed any pro-China stance. Hong Kong singer Ram Chiang (蔣志光), who sang the 1991 hit "Queen's Road East," a song depicting Hongkongers' feelings before the city returned to China, announced on Sunday (May 31) that he never signed the endorsement, despite the listing of his name.

Another person on the list, Taiwanese actress Hsu Hsi-yuan (徐熙媛), also confirmed that she never received any invitation to give her endorsement.

Hong Kong pianist Jacqueline Li (李巧靈) told Stand News that she did not support Beijing's national security law, stating that it was unlikely she was the only one whose name was used without their consent.

The political stances of Taiwanese or Hong Kong artists have always been a sensitive topic, with such strong incentives from China on offer to support the vanities of the communist country. Taiwan-born Ou-yang Nana (歐陽娜娜), who made millions of dollars with commercials and TV programs in China, shared in an interview in 2019 that China was her country and that she would always be a Chinese no matter where she was born.

In 2016, Taiwanese K-pop star Zhou Tzu-yu (周子瑜), after a backlash by Chinese netizens, found herself forced to apologize publicly for holding Taiwanese flags and stating that she came from Taiwan on a South Korean TV program.