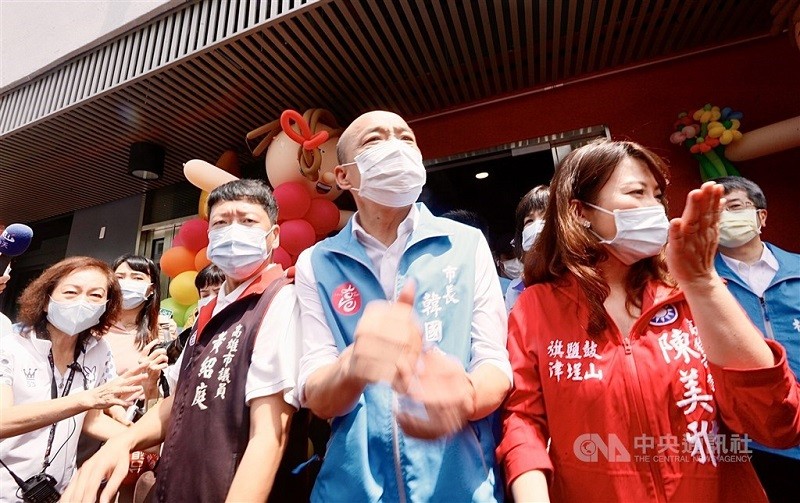 Kaohsiung Mayor Han Kuo-yu (韓國瑜) will face a recall vote on June 6, nearly 18 months after he began his four-year term at the end of December 2018.

The mayor of the southern city, the third largest of Taiwan's six special municipalities in terms of population, is the first special municipality head to face a recall vote, according to the Central Election Commission's (CEC's) online database.

As of April, Ministry of the Interior statistics show that Kaohsiung had a population of 2.77 million, behind New Taipei's 4.02 million and Taichung's 2.82 million.

Han, a former lawmaker from New Taipei, arrived in Kaohsiung in September 2017 to lead the local branch of Taiwan's main opposition Kuomintang (KMT) ahead of the local elections in November 2018.

In those elections, Kaohsiung reported a turnout of 73.54 percent, the highest among the six special municipalities, with Han winning a shock victory over the Democratic Progressive Party (DPP) which had run the city for two decades, according to the CEC database.

Han won with 892,545 votes, or 53.86 percent of the total in a four-candidate race, beating the DPP's Chen Chi-mai (陳其邁), a three-term legislator from the southern city before 2004 and two-term legislator-at-large before the mayoral election.

Chen, who was later appointed vice premier in President Tsai Ing-wen's (蔡英文) administration, garnered 44.79 percent, or 742,239 votes in the election.

During the first few months of 2019, Han visited Singapore, Malaysia, Hong Kong and the United States, with a visit to China's liaison office during his Hong Kong trip attracting most attention.

Following several rallies around Taiwan, Han won the KMT presidential primary in July 2019 after receiving an average of 44.8 percent support in five polls, ahead of runner-up Gou's 27.7 percent.

An online campaign, which blasted Han for his bid to run for president only a few months after he took office, was launched in June 2019 to collect signatures to begin the process to recall the mayor.

The CEC then announced on Jan. 17 that civic groups behind the recall campaign had collected 28,560 verified signatures, enough to proceed.

The number of signatures was more than 1 percent of the number of eligible voters in the southern city at the time of the 2018 elections, and met the threshold to propose a motion to recall under the Civil Servants Election And Recall Act.

The groups then managed to collect 377,662 verified signatures -- much more than the 10 percent of eligible voters required for a recall vote to be held under the act -- and sent them to the city's election commission in March.

After verifying the signed petitions, the CEC announced on April 17 that a vote on whether or not to recall the Kaohsiung mayor will be held on June 6.

Meanwhile, Han has sought to challenge the legality of the vote, but the courts have rejected his efforts to do so several times.

According to the Kaohsiung City Election Commission (KCEC), the number of eligible voters stood at 2,299,981 in the southern city, as of Friday, slightly higher than the 2,281,338 when the local elections took place in November 2018.

Anyone who has registered residency in the city on or before Feb. 6 and remains a registered Kaohsiung resident on June 5 can vote to decide the mayor's fate, according to the KCEC.

By law, for the recall motion to pass, at least 25 percent of eligible voters -- roughly 575,000 -- must vote in favor of the measure and the number of people voting for the measure must exceed the number voting against it.

The groups campaigning to recall Han started a series of rallies on Saturday that will continue until the night before the voting day.

On May 18 Han released an online video, in which he said he respects people's right to vote and recall him, but urged his supporters not to participate in the recall vote.