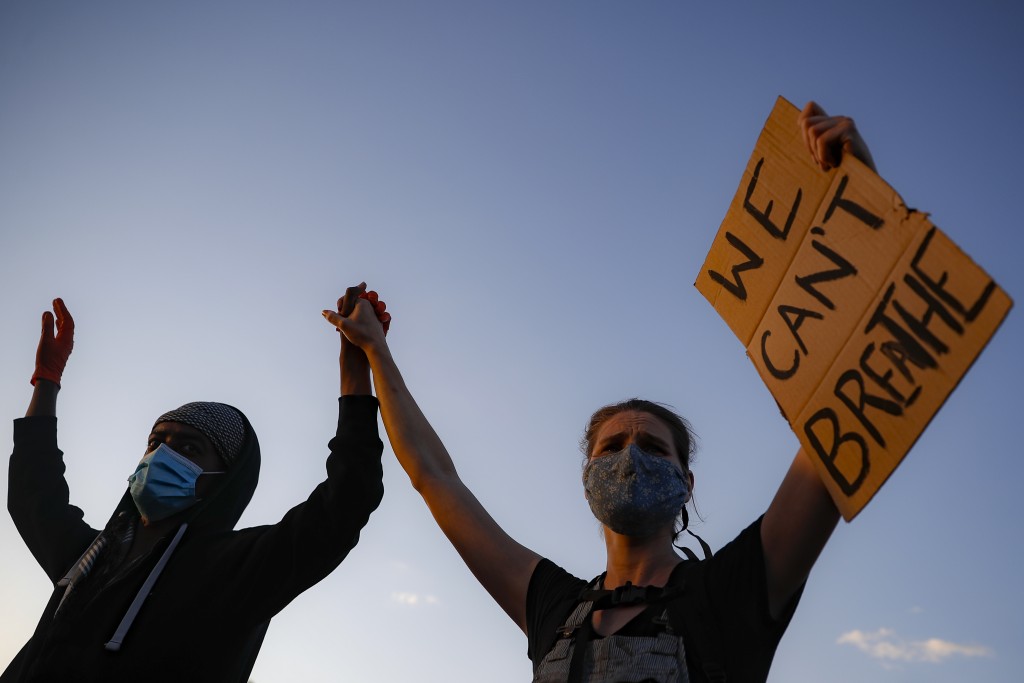 Eric Garner uttered those words six years ago, locked in a police chokehold. It became a rallying cry after his death for demonstrators across the country who protested the killings of African-Americans by police.

Then came the 2016 presidential election of Donald Trump. As the political divide widened, so much competed for the nation's attention — Russian interference in the election, debates over immigration, and impeachment — and with a new Justice Department shifting civil rights priorities, the moment slowly faded from the national stage.

Until this week. George Floyd uttered the exact same words, while handcuffed and pinned at the neck under the knee of a white police officer, galvanizing the movement anew and prompting mass protests around the country.

“There is something happening at this moment,” said activist Carmen Perez. “It’s not that the police killings stopped, it's just that we were refocusing our direction toward Donald Trump because we also felt this need to come together to call him out."

It's possible, though, with the nation just emerging from weeks of stay-at-home orders imposed to slow the spread of the coronavirus pandemic, people have fewer distractions and can refocus on the issue, she said.

The swift firing of the officers involved, the empathetic response from the Minneapolis mayor who also called for criminal charges, and the unusual public criticism of the officer's actions from law enforcement nationwide have done nothing to quell the anger or calls for justice.

That's in part because killings continue to happen. Floyd's death came after Ahmaud Arbery was shot to death in Georgia by a former district attorney investigator and his son, who were not arrested until after video emerged months later. And an EMT in Kentucky, Breonna Taylor, was killed in March when three officers entered her apartment by force to serve a search warrant in a narcotics investigation.

“This has been going on for way too many years, and it is time for a change,” said Erika Atson, protesting in Minneapolis Thursday. “Because we are tired.”

The protests that began with chanting and marching in Minneapolis the day after the disturbing video emerged that showed Floyd pinned for eight minutes have grown to mass demonstrations, some violent, in Minnesota and around the country.

Lawmakers nationwide are again talking about how to prevent such deaths in the future. Outrage over the images of Floyd's last moments even came from those who have a history of defending police, like Trump.

Civil rights attorneys in the three recent cases said what inspires the anger is, in part, that authorities initially propagated narratives that Arbery, Taylor, Floyd were responsible for their own deaths before video and 911 calls showed otherwise.

“There is a false narrative ... put out there," said civil rights attorney Benjamin Crump.

In the years before the 2016 election, though, it felt like policing was shifting.

The mothers of some of the men killed by police attended the Democratic National Convention. The Justice Department frequently criticized violent police confrontations and opened a series of civil rights investigations into local law enforcement practices.

But after Trump was elected, it shifted.

Former Attorney General Jeff Sessions ordered a review of consent decrees, legal agreements meant to effect change, that the Obama-era Justice Department had used to fight police misconduct, in part over a belief that the Democratic administration had vilified the police. The decrees included those with the police in Ferguson, Missouri, after the killing of Michael Brown and in Baltimore following the police custody death of 25-year-old Freddie Gray.

Hours before he resigned as attorney general in November 2018, Sessions signed a memo that scaled back the practice, making consent decrees more difficult to enact.

Attorney General William Barr has similarly been a staunch advocate of police officers and has condemned what he’s called a “disturbing pattern of cynicism and disrespect shown toward law enforcement.”

The department, however, has continued to pursue civil rights investigations involving police shootings and other alleged misconduct, including into Floyd's death. Barr has said the video was “harrowing to watch and deeply disturbing."

Barr's office closed the Garner case in September because there was insufficient evidence to prove a federal crime.

Gwen Carr, Garner's mother, said that even if police abuses hadn't been talked about in recent years as they were following her son’s 2014 death, that didn’t mean abuses weren’t happening.

“Police officers are still coming into our communities and brutalizing, terrorizing and killing us,” she said. “Between my son’s murder and Floyd’s murder, that’s not the only murders that has taken place.”

Garner had been arrested on charges of selling loose, untaxed cigarettes, a non-violent crime, and cried out “I can't breathe” 11 times on a Staten Island sidewalk. The officers involved were not charged; the one who performed the chokehold was fired five years later.

Floyd lay on the street, as Officer Derek Chauvin pressed his knee into the man's neck. He'd been arrested on a forgery charge, accused of passing a bad bill at a grocery store after he got laid off.

“Please I can’t breathe,” Floyd cried. “My stomach hurts. My neck hurts. Everything hurts. They’re going to kill me.”

At one point, he cried out for his mother as a crowd of shocked bystanders begged for police to move. Chauvin was arrested Thursday on a murder charge.

Meanwhile, protesters are seizing the moment in the hopes that change will come.

On Friday in Minneapolis, Maurice Davis stood close to the burned police station near a line of national guardsmen.

Davis has gone to some protests, but came this morning with his two adolescent children to show them what was happening.

“This has been happening for years,” he said. “We’re tired of being killed and no one doing anything about it."

He's not surprised the protests are spreading.

"Because it’s not just our city where this is happening. It’s everywhere.”