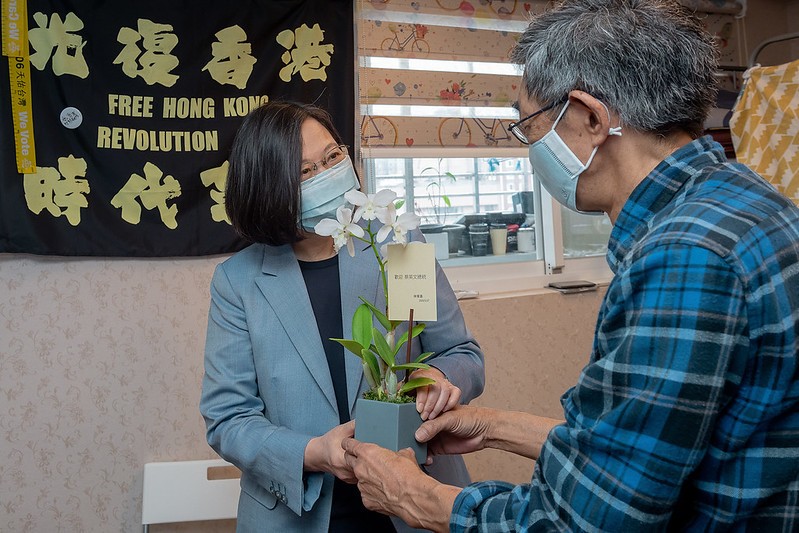 TAIPEI (Taiwan News) — President Tsai Ing-wen (蔡英文) on Friday (May 29) visited Causeway Bay Bookstore in Taipei, which was re-opened by its founder Lam Wing-kee (林榮基) in April, to show support for Hongkongers’ pursuit of democracy and freedom.

Tsai visited the bookstore that was previously targeted by Chinese authorities for selling politically sensitive books when it had been based in Hong Kong. She wrote a post-it note saying, “Taiwan stands for Hong Kong’s freedom” and stuck it on a bookshelf covered with similar messages of support. The visit came just one day after Tsai publically condemned China for passing the draft of a contentious national security law for Hong Kong, which many fear will further erode the territory’s already shrinking autonomy and freedom.

Lam settled down in Taiwan after leaving his hometown and started a business by opening a very special bookstore, remarked Tsai. She expressed appreciation for Lam’s efforts in fighting for Hong Kong, adding, “I hope you can work with us here and together, we can promote the development of freedom and democracy.”

Today I visited Causeway Bay Books in Taipei to welcome Lam Wing-kee on behalf of the people of #Taiwan, & thank the people of #HongKong for their commitment to freedom & democracy. #TaiwanForHongkong pic.twitter.com/MRrF4K4wxH

“Many Hongkongers need the Taiwanese government to lend a helping hand,” said Lam. He urged Taiwanese authorities to extend the duration of residency and loosen immigration restrictions for Hongkongers who have fled or are considering moving to Taiwan due to their involvement in the pro-democracy protest movement that had roiled the territory for much of the past year.

Lam also called on Hongkongers who may come to Taiwan to join forces and protect the island nation from China's potential annexation. “The differences between a democratic government and an authoritarian regime... this is something I am well aware of,” he stated.

As the founder of Causeway Bay Bookstore in Hong Kong, Lam, along with four other bookstore members, went missing one after another in late 2015. They later resurfaced as detainees in China, facing trials for various charges by Chinese authorities.

Shortly after being released back to Hong Kong, Lam called a press conference —a direct challenge to Beijing—and revealed the details of his detention and the opaque trial process he had experienced.

Lam fled to Taiwan last May after sensing that the government-led extradition bill, which would have allowed Hong Kong residents to be sent to China for trials, could soon be passed. He has now acquired legal residency in Taiwan by operating a business, according to the Mainland Affairs Council (MAC).

The government will offer assistance to the Hong Kong people through a designated working group with expanded services, explained Tsai. She was referring to a government-led plan, currently being mulled by the MAC, that aims to deal with residency, settlement, and protection of people from Hong Kong.

Lam hit the fundraising goal for re-opening Causeway Bay Bookstore in Taipei within 24 hours last year, with many Taiwanese backing the project. Even after being attacked with red paint by alleged pro-Beijing loyalists just a few days before the bookstore opened, Lam proceeded with his plan and continued voicing support for Hong Kong protesters.