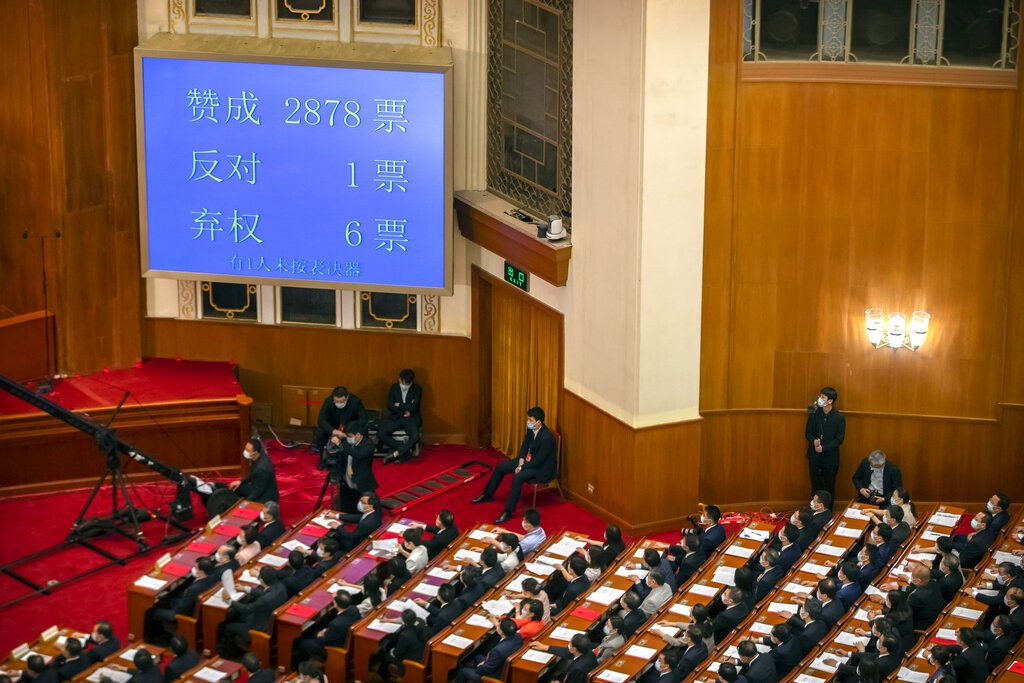 At 3 p.m. on Thursday, the NPC voted overwhelmingly in favor of the repressive law with a final count of 2,878 in favor, six abstaining, and one opposed. In response, Hong Kong's Hang Seng index immediately dropped by 228.69 points, or nearly one percent.

The bill will next be passed on to the Standing Committee of the Communist Party and could take effect in August. The full wording of the bill has not been released to the public, but it is known to criminalize "secession, subversion, terrorism, and activities by foreign forces to interfere in Hong Kong."

What is also known is that the bill also stipulates that "when needed, relevant national security organs of the Central People's Government will set up agencies in Hong Kong to fulfill relevant duties to safeguard national security in accordance with the law." This would mean that China could set up its own law enforcement agencies inside of Hong Kong which would have the authority to apprehend Hong Kong citizens in accordance with the law.

In bypassing the Hong Kong Legislative Council, Beijing has in one fell swoop violated the Basic Law, the Sino-British Joint Declaration, and destroyed the tattered remains of the "one country, two systems framework." The announcement that the new bill would be on the docket for the NPC sparked massive protests in Hong Kong this week. Police responded with an ironfisted approach, including the use of tear gas, pepper spray, kettling, and the arrest of hundreds of protesters.

In anticipation of the passage of the law, U.S. Secretary of State Mike Pompeo on Wednesday (May 27) informed Congress that the White House no longer considers Hong Kong as autonomous from China. The significance of this change in stance could pave the way for the U.S. Congress to revoke Hong Kong's special trade status and open the door for sanctions against Chinese officials under the Hong Kong Human Rights and Democracy Act.

On her Facebook and Twitter pages on Wednesday (May 27), Taiwan President Tsai Ing-wen (蔡英文) announced that she was coordinating with Su Tseng-chang (蘇貞昌) on devising a humanitarian assistance program for Hongkongers fleeing to Taiwan. Tsai said that the program would include plans for "residence, placement, employment, and life in Taiwan as soon as possible."

Today I asked the Executive Yuan to draw up a humanitarian assistance action plan for #HongKong citizens that lays out clear, complete plans for their residence, placement, employment, & life in #Taiwan as soon as possible. pic.twitter.com/XYBTe89WyD