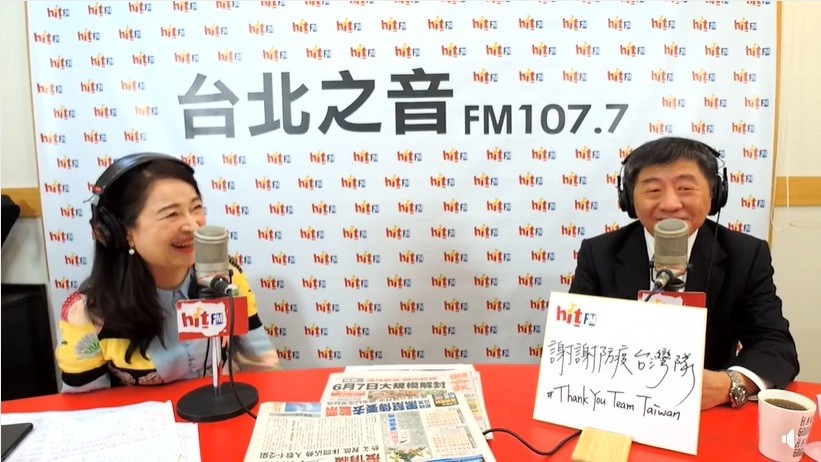 TAIPEI (Taiwan News) — Taiwan's Central Epidemic Command Center (CECC) chief on Wednesday (May 27) said that his comment last week about China's chairman and the World Health Organization's (WHO) head "cuddling together for warmth" probably agitated the communist country into claiming he was covering up an epidemic in Taiwan.

During a radio interview with Hit Fm host Clara Chou (周玉蔻) on Wednesday, Minister of Health and Welfare and CECC head Chen Shih-chung (陳時中) said that as the number of Wuhan coronavirus (COVID-19) cases continue to drop dramatically in Taiwan, many epidemic prevention measures can be relaxed on June 7.

Chou then asked Chen's take on why China had recently described him as the "top leader in concealing the epidemic." He responded by saying that it probably had something to do with his criticism of Chinese Chairman Xi Jinping ((習近平) and WHO Director-General Tedros Adhanom last week.

On its Weibo page, the Taiwan Affairs Office (TAO) on May 20 wrote that Chen "Is not qualified in epidemic prevention, but is a good hand at smearing the mainland, attacking the WHO, making trouble for Taiwanese compatriots, and concealing the epidemic." Chen said that this was likely in response to his comment on May 19, the second day of the World Health Assembly (WHA), which Taiwan was excluded from, that Xi and Tedros were being "tested by the world, so they can't help but cuddle together for warmth."

Chen said that this flustered Chinese leaders when they heard this critique because "Xi and Tedros had been severely tested, so of course they would say good things about each other. This is human nature." When Chou asked about China's fears that Chen could run for president, he chuckled and said, "If they are worried about this, then they shouldn't worry."

Chen added that he understands that China's information is not transparent: as it is a large country and under totalitarian rule, it is difficult to assess the true situation, he said. "Whoever reports first will be in trouble, so the epidemic will be concealed."

In contrast, Taiwan has a democratic system, so it is impossible to hide the epidemic, said the CECC head. As for the WHO's warning that there could be a second wave of the pandemic, Chen said that this a distinct possibility.

Therefore, Taiwan has made many preparations and introduced the concept of a "new epidemic prevention lifestyle," said Chen. He said all of this is being done in anticipation of a second wave of outbreaks.