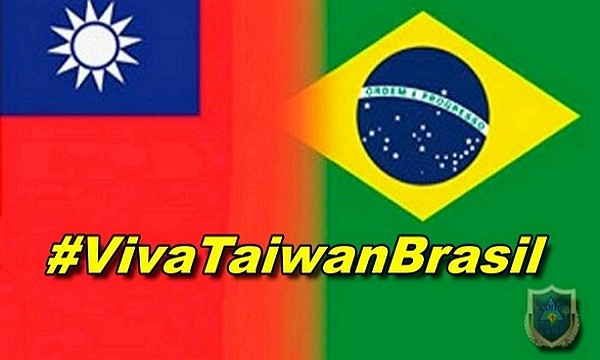 TAIPEI (Taiwan News) — After the Chinese Communist Party's (CCP) was found to have threatened the Brazilian Chamber of Deputies to stay silent on Taiwanese President Tsai Ing-wen's (蔡英文) reelection, netizens in Brazil have expressed their dissatisfaction with Beijing by starting a "VivaTaiwan" (Long live Taiwan) campaign on Twitter.

According to UDN, the hashtag #VivaTaiwan took Twitter by storm and became its global top trending item Tuesday morning (May 26). The campaign is believed to have been launched as a direct response to a CCP letter demanding that Brazilian lawmakers refrain from congratulating or acknowledging in any way Tsai's inauguration on May 20.

In a Twitter post on Tuesday, Brazilian Congressman Paulo Eduardo Martins shared a letter issued by the CCP on May 13 and said the Chinese embassy had "recommended" the Brazilian lawmakers stay silent regarding Tsai's inauguration. He expressed surprise at Beijing's ridiculous request, going on to congratulate Tsai on the commencement of her second term.

Taiwan's Ministry of Foreign Affairs (MOFA) responded to Martins' tweet and said that the Taiwanese government and its people "sincerely appreciate the friendship and support of Brazil." Meanwhile, Martins stressed that it was his honor to defend Taiwan's freedom.

Since it came to light, the Chinese letter has attracted the attention of thousands of Brazilian netizens, who have left comments in support of the island nation. The comments include: "Taiwan is free and democratic while China is ignorant and cruel," "Hopefully Taiwan will be able to establish its embassy in Brazil," and "Taiwan should rid itself of control from the CCP and the evil communists," according to Liberty Times.