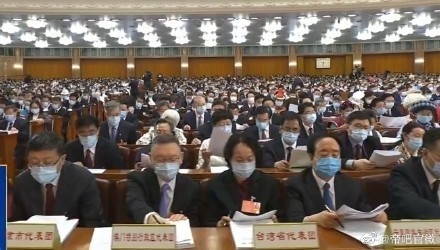 TAIPEI (Taiwan News) — During Friday's (May 22) session of China's rubber-stamp legislature, the National People's Congress (NPC), 13 "Taiwan representatives" appeared to express their "determination for and confidence in unification."

While presenting a work report to the NPC on Friday, Premier Li Keqiang (李克強) stressed that China will encourage the people of Taiwan to "oppose Taiwan independence and promote unification." After attending the NPC meeting, 13 "Taiwanese deputies" took part in a plenary meeting that was held in the afternoon to review the government's report and appeared to express their "determination for and confidence in promoting unification with the motherland," according to the All China Taiwanese Association.

According to the website, the meeting was presided over by Huang Zhixian (黃志賢), head of the "Taiwan Province Delegation." The delegates reportedly agreed that "the report on the government work highlights the development of the idea of 'people first,' proclaimed the principles and policies of the mainland towards Taiwan, called on us to unite without our compatriots in Taiwan to oppose 'Taiwan independence and promote unification,' and vowed that 'We will surely create a bright future for national rejuvenation.'"

Out of these 13 delegates, only Chen Yunying was actually born in Taiwan.

Zou Zhenqiu said that it was a rare experience to attend the meeting wearing masks. This, he claimed, symbolized that after the "periodic victory" in the fight against the epidemic, the "phased victory" was the right time to make major decisions on all aspects of the country: "Today, when I sing the national anthem, I feel a lot of emotion and my throat is choked, especially when I sing 'The most dangerous time for the Chinese nation.' I really feel great empathy."

Chen Yunying said the outbreak is a test for everyone to reconfirm the "Chinese heart." Chen then claimed that if the "'Chinese heart' is confirmed, in fact, the problems in Hong Kong and Taiwan will not be as complicated as they are now."

Xu said that the premier's report had great "depth, temperature, and boldness." She claimed Li had "analyzed the current situation scientifically, put people's livelihood first according to the actual situation of the country, and demonstrated the actions of a responsible government."

Xu claimed that on the part of the Taiwan delegation "we reaffirmed our policy toward Taiwan and opposed 'Taiwan independence.'" She said that secondly, they expressed "determination and confidence to promote the reunification of the motherland."