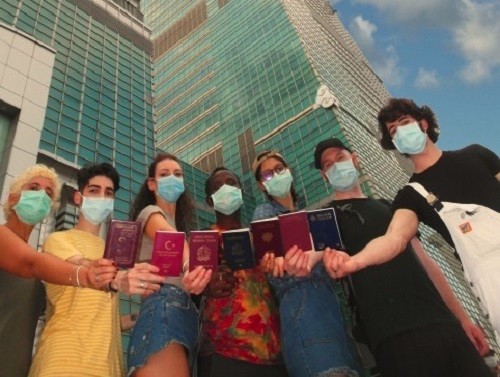 TAIPEI (Taiwan News) — A group of over 100 foreign travelers who became stranded in Taiwan after the Wuhan coronavirus (COVID-19) pandemic broke out have formed a support group and are seeking assistance with their new life in Taiwan.

On Feb. 25, just as the coronavirus outbreak was beginning to accelerate, Lea, a 31-year-old Argentinian real estate agent, told Taiwan News that she had a layover scheduled in Taiwan during a tour of southeast Asia. As fate would have it, this was her last flight, as countries soon closed their borders due to the pandemic, and she found herself having to make plans to stay in Taiwan indefinitely.

Fortunately, Lea managed to contact a French woman willing to let her stay in her apartment, as the woman was unable to return to Taiwan. After meeting a growing number of foreigners in the same boat — given that airports across the globe were shutting down — on April 8, Lea decided to set up a Facebook group called "Stuck in Taiwan - Best Place to Be."

The purpose of the group is to connect those willing to help out with foreigners in need of assistance. Over 279 members have joined the group thus far from countries such as Argentina, Turkey, Lebanon, France, and the U.S.

The co-administrator of the page, Mary, a 30-year-old Italian with residency in the U.K., told Taiwan News that she had been taking a six-month break from her life in London, where she worked as a gym/spa manager, to travel across Asia. On Feb. 21, she arrived in Taiwan with plans to travel in the country for two to three weeks.

However, she soon heard from her family in Italy that her home town of Codogno had gone into lockdown. Two weeks later, the pandemic spread to the U.K., which closed its borders as well.

She was greatly distraught by not being able to see her family and the uncertainty of finding a place to live on the island. Fortunately, a Taiwanese woman she had met before in London had an extra couch for her in her studio apartment.

Like many members of the group, Lea and Mary are finding that their funds are rapidly running out. Mary said that because she is not a native English speaker, she is not qualified to teach English.

Although her native language is Italian, she cannot teach that language either, because she does not have a university degree. She said that even finding work as a model is difficult due to a lack of experience and insufficient examples of previous work.

Lea said that initially, most of the members of the group were looking for housing. However, she says that problem has largely been solved and that the majority are now seeking employment.

The biggest challenge for these foreign visitors is that because they came on tourist visas, there are a lot of bureaucratic layers to clear to apply for a work permit. Unfortunately, in many cases, would-be employers balk at going through the prohibitive amount of red tape to apply for working visas.

What many members of the group are asking now is for the government to provide some sort of special exemption to allow them to work in Taiwan on a temporary basis until the pandemic is under control in their home countries. Mary made a video, also titled "Stuck in Taiwan - Best Place To Be," in which several foreigners told their stories, and uploaded it to YouTube on May 20.

In the video, Ben from Slovenia, Lea from Argentina, Tolga from Turkey, Sammy from Lebanon, Sam from the U.S., and Jason from Australia introduce their stories. All of them had come to visit Taiwan before finding that their countries had sealed their borders amid the chaos of the pandemic.

Sam said he had found employers who were interested in hiring him, but they were not willing to go through all the procedures to help him obtain a work visa. Sam asked that the government provide them with a temporary work visa for the duration of the pandemic to enable them to support themselves rather than have to rely on government handouts.

Ben said that because he is a student who has yet to graduate, he does not yet have any work experience to list. In the video, he stated that he had purchased a ticket to return to his home country, but five days later, after the film was shot, Ben's flight was canceled.

Lea said that "Taiwan is the best place actually to be," and she added that she was grateful that the government had given visitors another 90-day extension to stay in the country. She said that now, they just need a little more help in terms of work to support themselves.

To ask for assistance or offer help, one need only join the group and make a post.