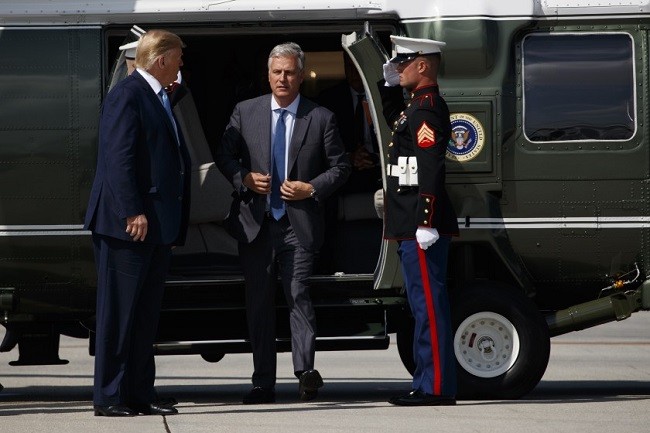 TAIPEI (Taiwan News) — The national security advisor for President Donald Trump on Sunday (May 24) warned the special trade and financial status granted to Hong Kong by the U.S. would be jeopardized if China greenlights a security bill that would stifle civil liberties in the semi-autonomous city.

China on May 21 introduced legislation at the annual National People's Congress that could be targeted at its detractors, such as protesters and opposition lawmakers, in Hong Kong. This sparked an outcry, both within the city and worldwide, with democracy supporters fearing the bill will snuff out what remains of the autonomy guaranteed to them under the 1984 Sino-British Joint Declaration.

According to Hong Kong's constitution, the special administrative region (SAR) must draft its own laws with regard to the offenses of "treason," "secession," "sedition," or "subversion." However, in light of the months-long protests that have gripped the city for much of the last year, Beijing says it is now bypassing Hong Kong's legislature in order to help the SAR "safeguard national security," according to CCP mouthpiece the Global Times.

Speaking on CBS' "Face the Nation" on Sunday, Robert O'Brien, who last fall replaced John Bolton as President Trump's national security advisor, was asked whether the U.S. could potentially revoke Hong Kong's preferential status over the law. O'Brien replied that "This is really a choice for the Chinese Communist Party," AFP reported.

O'Brien pointed out that Beijing was treaty-bound to respect Hong Kong's relative autonomy until 2047 and stated that the law would result in "significant consequences" if passed by China's rubber-stamp legislature. In particular, he said he "can't see how Hong Kong remains an Asian financial center" if the bill is passed, suggesting the U.S. is willing to invoke the nuclear option lawmakers put on the table last year.

According to the Hong Kong Human Rights and Democracy Act, which was signed into law last November with broad bipartisan support, the U.S. State Department is required to evaluate the state of Hong Kong's autonomy and democratic institutions on a regular basis. If China is deemed to have failed to uphold its obligation to preserve these, Hong Kong can be stripped of its preferential status.

The top presidential advisor's comments follow a warning shot fired by Secretary of State Mike Pompeo on May 22: "China's latest attempt to tighten its grip on Hong Kong would "inevitably impact our assessment of One Country, Two Systems and the status of the territory," The Washington Post reported.