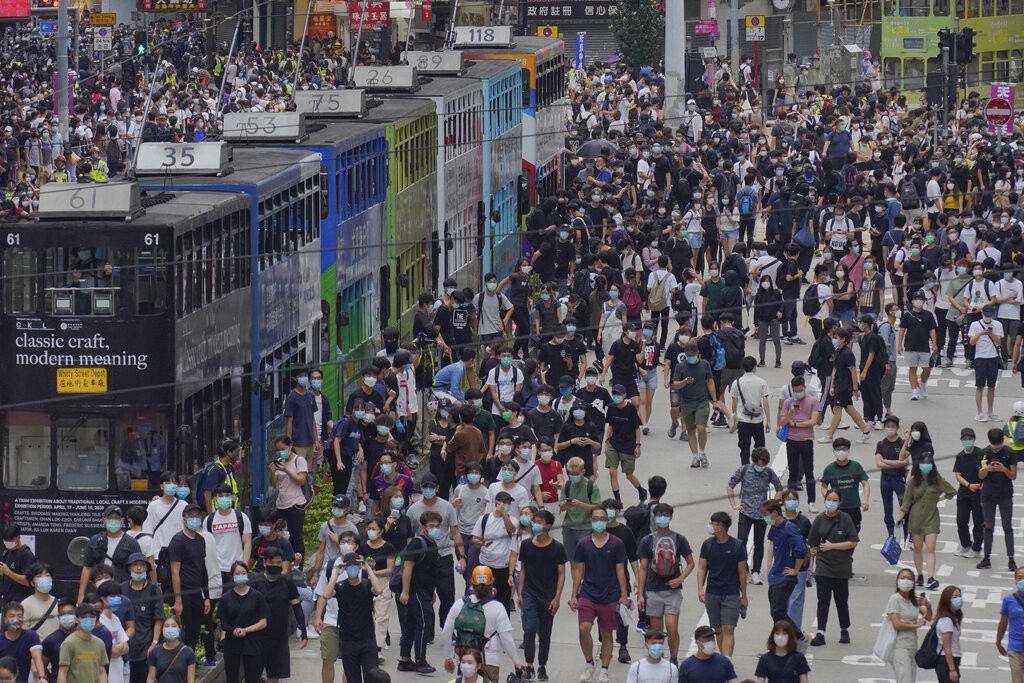 TAIPEI (Taiwan News) — Political parties across the spectrum in Taiwan have expressed concerns over Beijing’s proposed national security legislation for Hong Kong, which many fear would further undermine the city’s already shrinking autonomy.

The ruling independence-leaning Democratic Progressive Party (DPP) issued a statement on Friday (May 22), a day after Chinese officials announced the plan to draft a national security law for the semi-autonomous territory while circumventing the Hong Kong government's regular legislative procedures. The bill, which is likely to prohibit secession, sedition, terrorist activities, and foreign inference, appears to be taking aim at the pro-democracy protest movement that has roiled Hong Kong for much of the past year.

The statement strongly condemned the Chinese government's move that it said would “further trample over Hong Kong’s rule of law and freedoms." The party also said that "one country, two systems," a political arrangement that has guaranteed autonomy for Hong Kong since its 1997 handover, will come to an end with the passage of the legislation.

"We urge the Chinese authorities… to stop sabotaging Hong Kong’s autonomy and Hong Kong’s future… and to start a dialogue with the Hong Kong people," said the ruling party. It also pledged to protect the democratic way of life in Taiwan while standing in solidarity with Hongkongers.

President Tsai Ing-wen (蔡英文), who is also the chair of the DPP, has said that her administration would “offer necessary assistance” to the people of Hong Kong. The government may also consider revoking, either partially or entirely, the legislation governing Taiwan’s relationship with Hong Kong and Macau to safeguard "national security and interests" as a response to Beijing’s push for greater control over the territory, added Tsai.

Opposition parties expressed similar concerns over the weekend. The China-friendly Kuomintang (KMT) said in a statement on Sunday (May 24) that the party “has always supported Hong Kong's remaining an area with democracy and freedoms that is distinct from the mainland.”

China’s handling of Hong Kong affairs will have an impact on cross-strait relations, warned the KMT, urging Beijing to fulfill the promise of a high level of autonomy for the special administrative region that it made during its handover from the UK over two decades ago. The main opposition party also rejected the "one country, two systems" formula for Taiwan, which China’s leader Xi Jinping has said is in store for the island nation.

The Kuomintang’s newly appointed chair, Johnny Chiang (江啟臣), has also claimed that the party’s legislators will mull a draft in support of Hong Kong society’s fight for freedom. He also called on the DPP to come up with substantive action to back the city's people.

The New Power Party (NPP), while stressing that it has always stood with Hong Kong’s protesters, criticized the Tsai government for not having taken enough action to help. It noted that the Hong Kong issue vanished from the Tsai administration’s discourse this year and that the president did not even mention it in her inaugural address last week, insinuating that Tsai only cared about the city's people insofar as they affected her success in January’s presidential election.