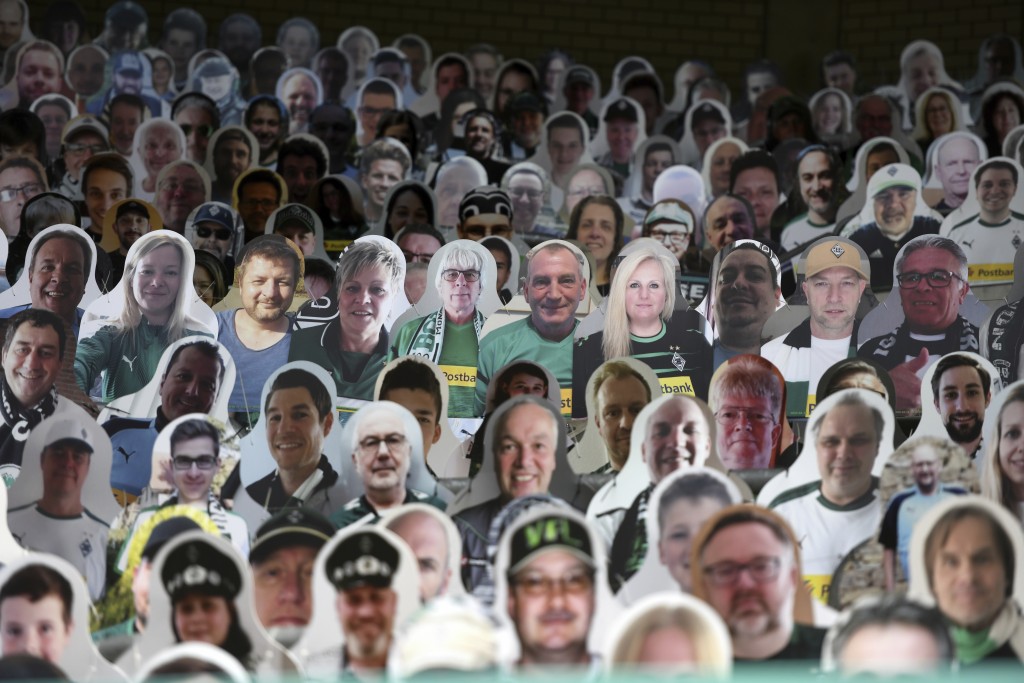 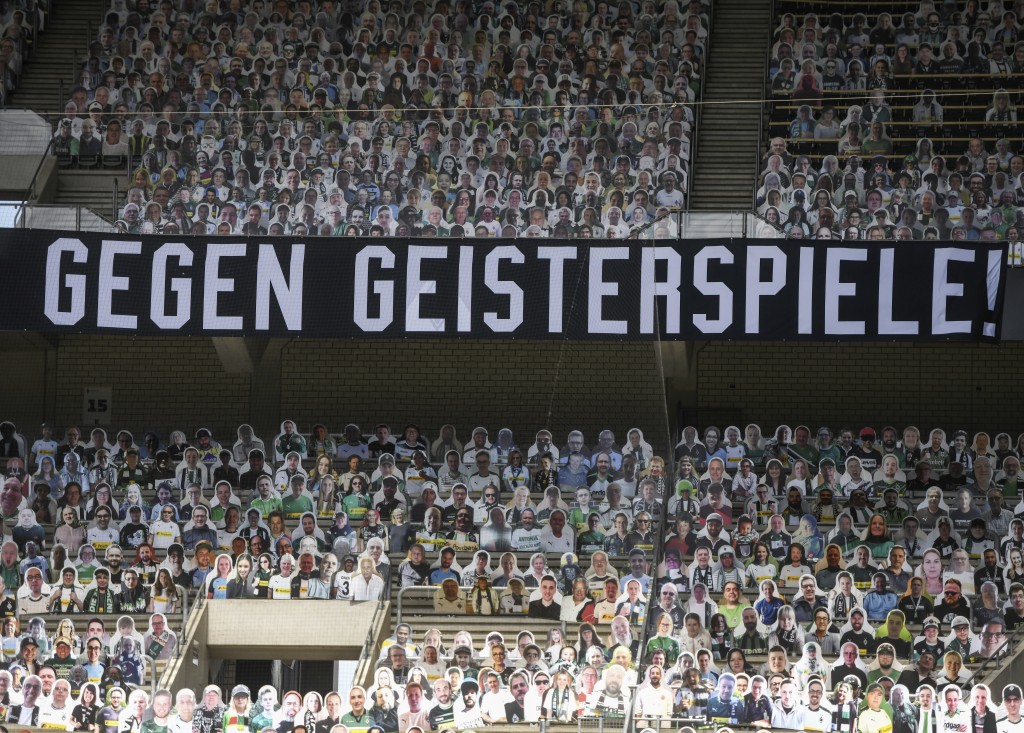 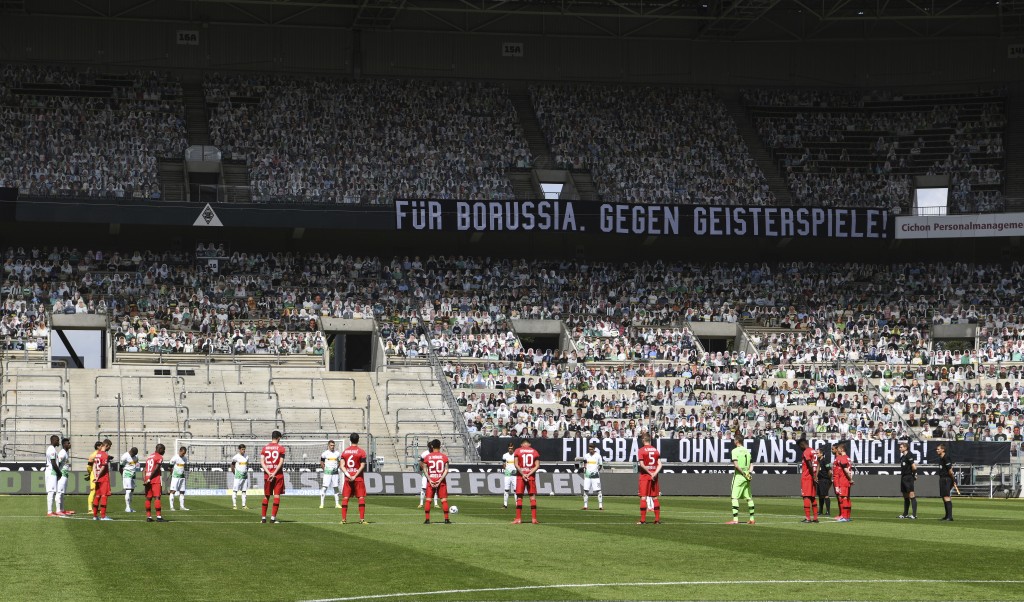 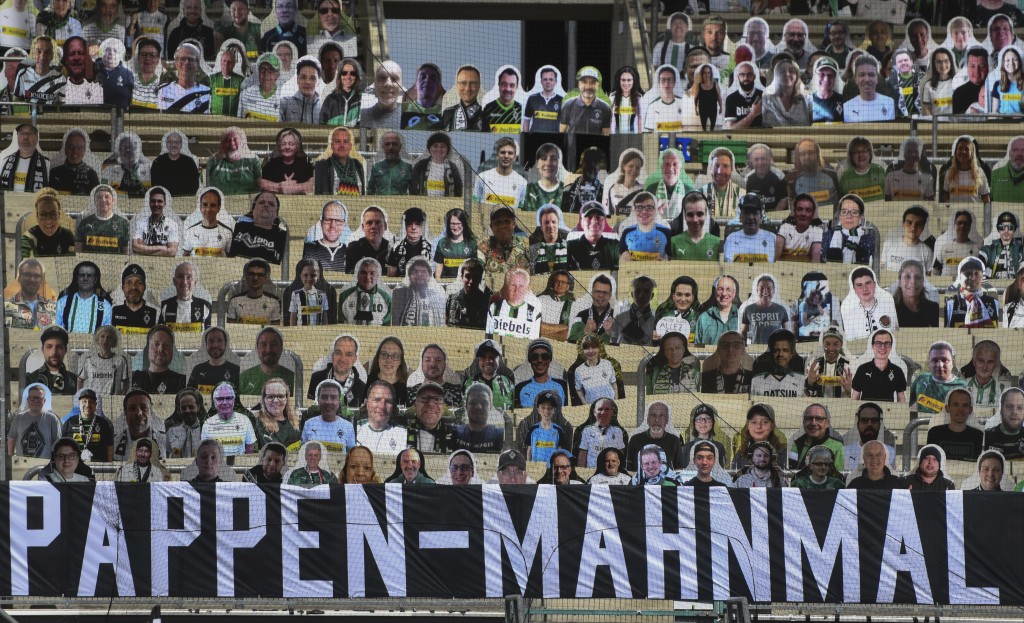 DÜSSELDORF, Germany (AP) — Even when German fans are stuck at home, they can still be seen in the stadium.

Around 13,000 cutouts filled the stands on Saturday as Borussia Mönchengladbach hosted Bayer Leverkusen in a Bundesliga game which could help decide Champions League qualification.

Gladbach fans took pictures at home in a shirt or scarf and paid 19 euros ($20.70) to be turned into one of the “Pappkameraden” or “cardboard companions.” Season-ticket holders have their cutout placed in their usual spot, though some fan groups denounced the idea.

“It’s better to play in front of dolls than nothing at all," Leverkusen coach Peter Bosz said before the game.

It was Gladbach's first at home since the Bundesliga restarted without spectators amid the coronavirus pandemic.

The cutouts didn't do Gladbach much good on Saturday. Leverkusen won 3-1 to overtake Gladbach for third in the table, as Gladbach missed good chances to score late on.

“Despite that it still looks really super,” Gladbach right back Stefan Lainer said. “It creates a certain atmosphere.”

Coach Marco Rose and some of his players were also in the stands in two-dimensional form, along with greats of the club's past. They include Günter Netzer, who won the West German title with Gladbach in 1970 and 1971 and the World Cup in 1974. There’s even an away end with pictures of supporters from Leverkusen and other clubs. Gladbach said it was a nonprofit initiative with proceeds going to charity.

Gladbach's form this season has echoed its golden age from the 1970s. The club led the table early in the season and is still fighting for a Champions League spot.

Not all of the real-life fans like their cutout counterparts. Some groups oppose continuing the season without spectators and feel the cutouts legitimize that.

“Football without fans is nothing,” read a large banner placed at one end of the stadium on Saturday.

“For Borussia, against ghost games,” read another.

“The bleak backdrop of empty stadiums is exactly what these games represent and deserve,” the Sottocultura group of Gladbach fans said in a statement. “We consider the initiative with the cardboard figures to be counterproductive. We understand the well-meaning, charitable idea behind it, but we consider the signal to be the wrong one.”

Gladbach isn't the first club to try replacing fans with doppelgangers during the coronavirus pandemic.

Before the Bundesliga restarted, Belarus was the only country in Europe playing league games. Champion club Dynamo Brest printed off photos sent by supporters abroad and attached them to shop mannequins wearing a motley variety of old shirts.