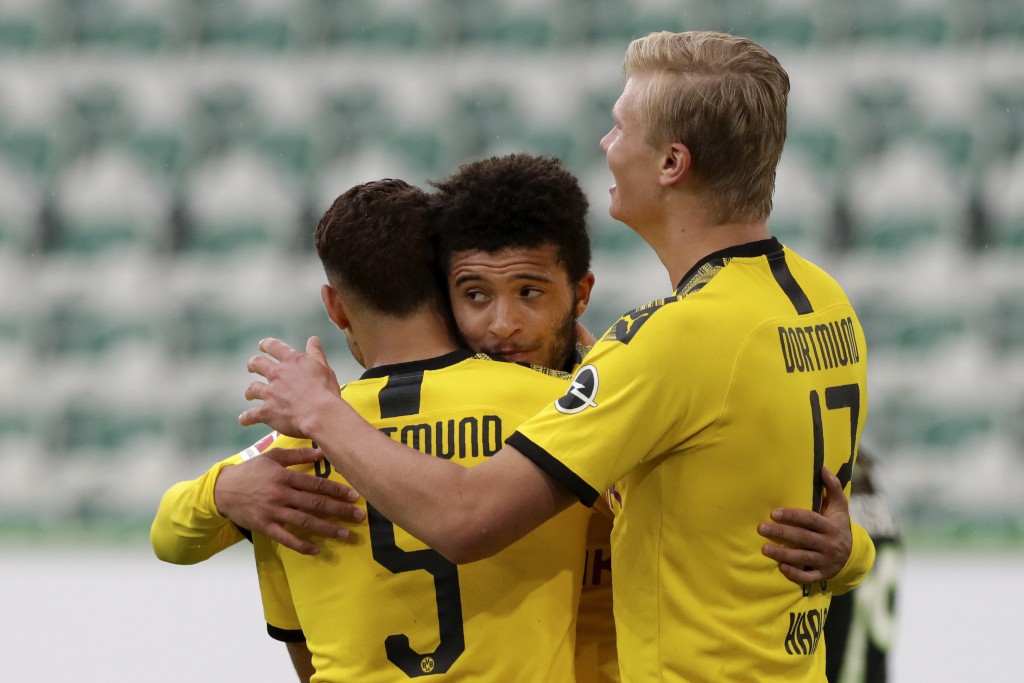 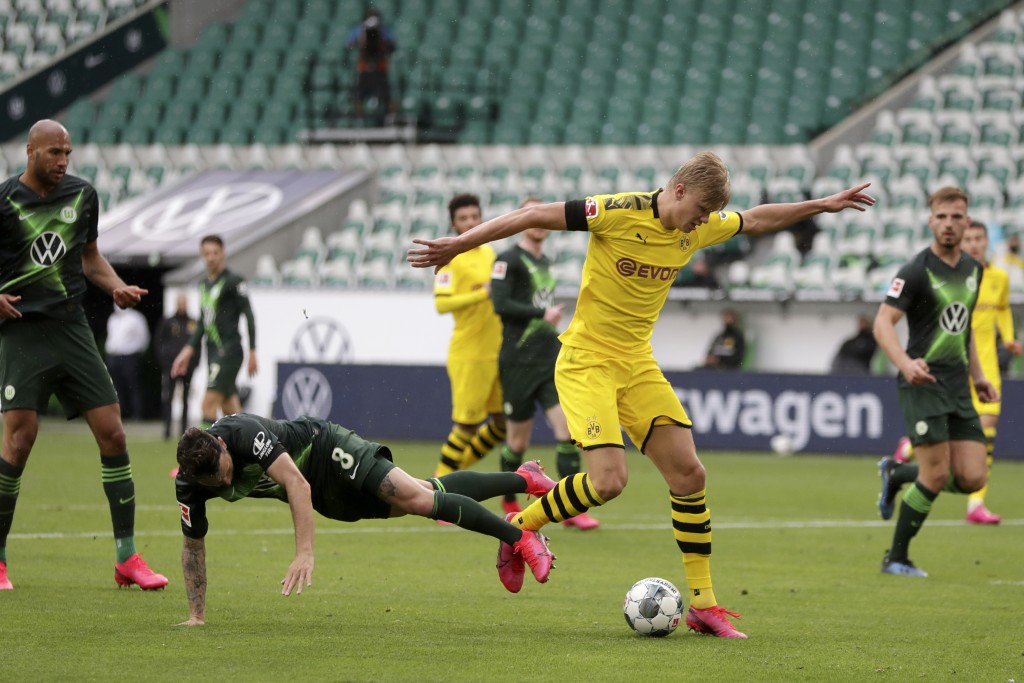 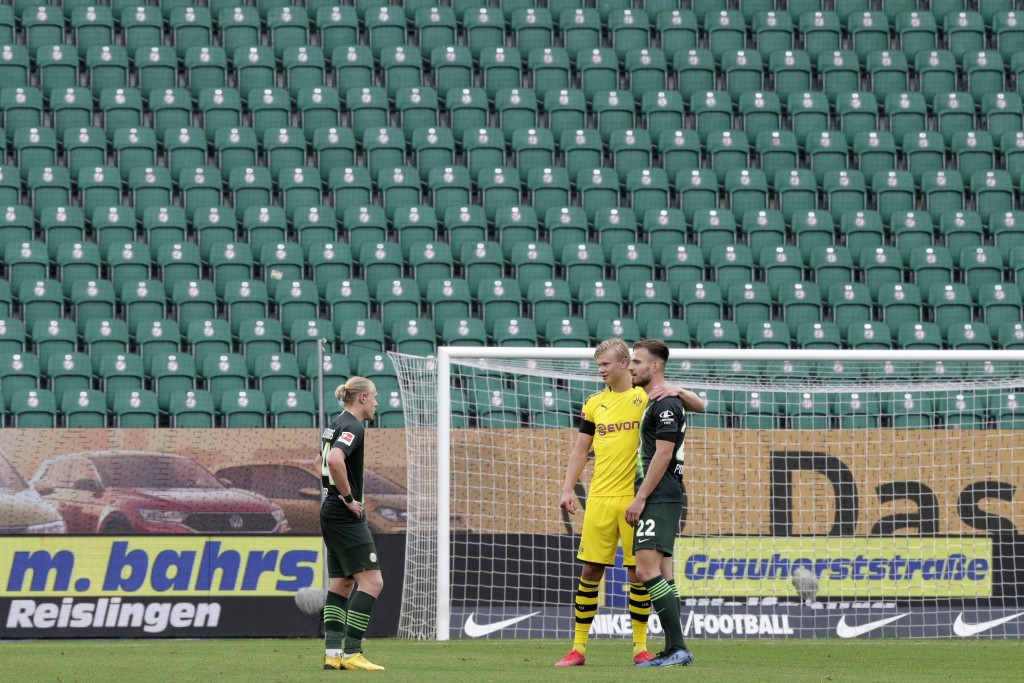 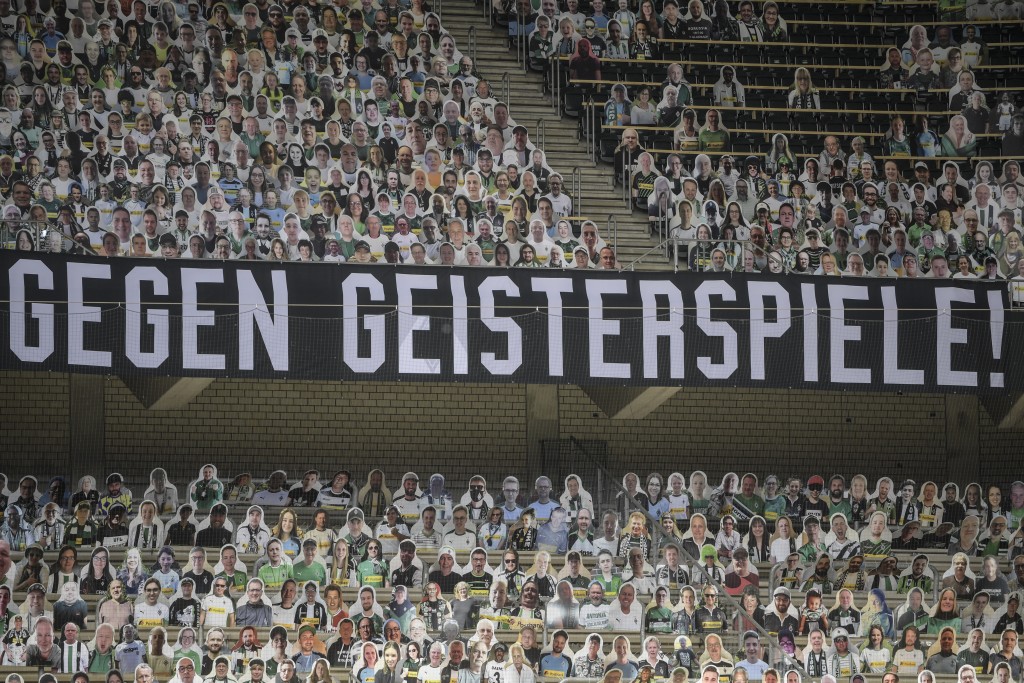 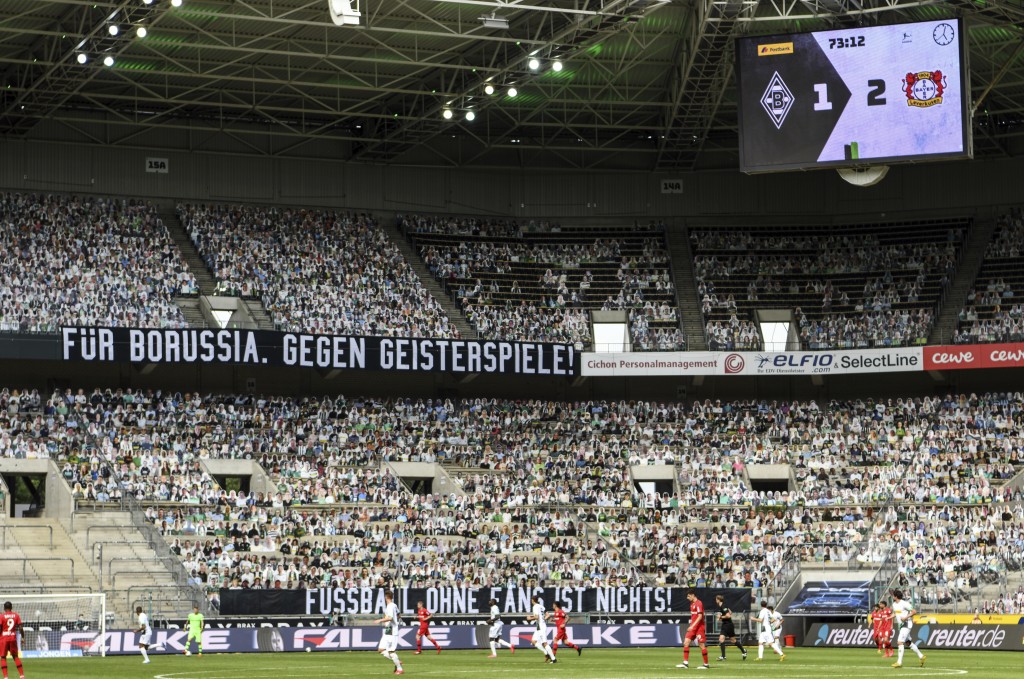 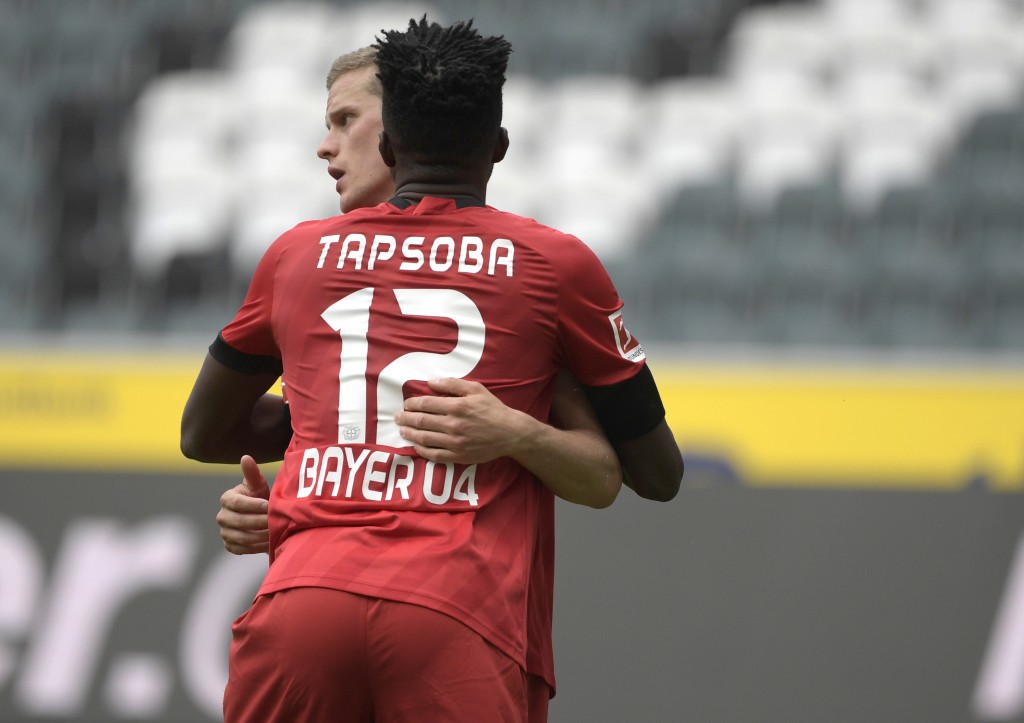 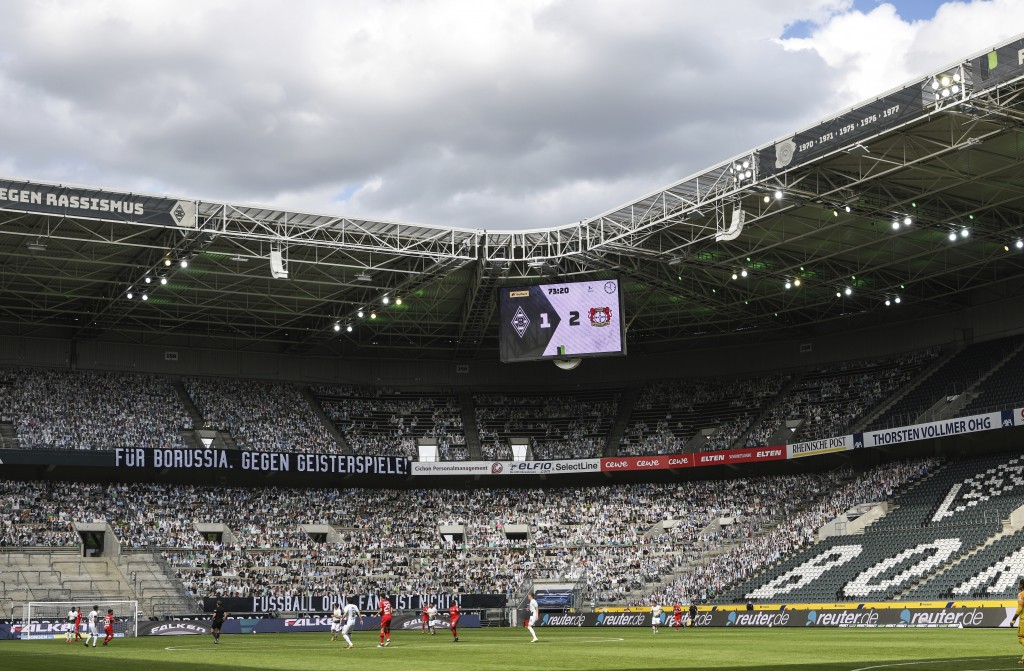 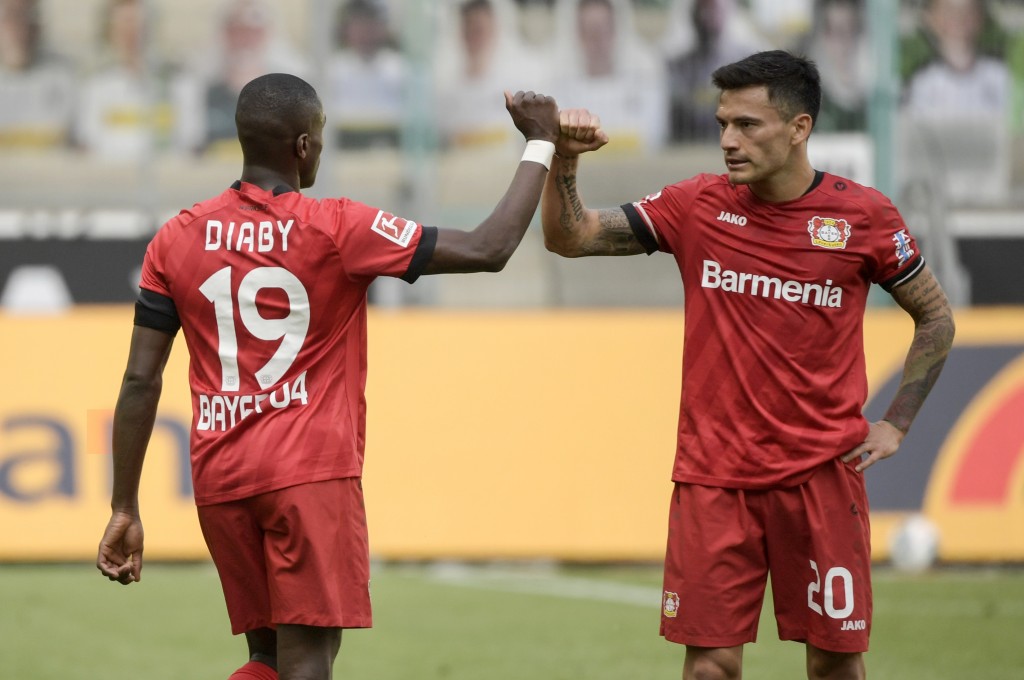 BERLIN (AP) — Borussia Dortmund is keeping its Bundesliga title challenge alive despite playing with no spectators and amid strict hygiene measures against the coronavirus.

Dortmund quietly labored at Wolfsburg to a 2-0 win on Saturday, closing the gap on Bayern Munich to a point, ahead of the leader’s late game at home to Eintracht Frankfurt.

Bayern will then host Dortmund on Tuesday for a game that will go a long way to deciding the championship -– assuming the remaining seven rounds go ahead.

The league resumed last weekend after its pandemic-induced two-month break and players must undergo regular testing for COVID-19 before they are cleared to play.

Like last weekend, players wore face-masks on arrival for all games on Saturday, while those who didn’t start kept them on and maintained their distance. Balls were disinfected, and officials conducted pre-game interviews at a distance with microphones mounted on poles to keep TV reporters at bay.

The German football federation (DFB) sent a letter to the clubs during the week warning them that society and politicians were watching closely after some criticism of goal celebrations that went too far the previous weekend.

Hertha Berlin’s players celebrated freely in their 3-0 win at Hoffenheim last week, but made a point of refraining in the 4-0 derby win over Union Berlin on Friday.

The DFB said local health authorities could consider TV images when deciding on imposing quarantine measures on teams in case of a positive result for COVID-19.

Dortmund struggled to impose itself against Wolfsburg but scored with its first real chance through Guerreiro in the 32nd minute. Julian Brandt cleverly played in Hakimi, who sent Thorgan Hazard through. Hazard cut the ball back for Erling Haaland – who missed it – but Guerreiro was there to sweep the ball to the net.

Dortmund defender Mats Hummels went off at the break. It was unclear if he was injured or being rested for Tuesday’s clash with Bayern.

Renato Steffen hit the crossbar with Wolfsburg’s closest chance right after the break, when the home side dominated.

But Wolfsburg was caught on a counterattack led by Jadon Sancho in the 78th, when Hakimi fired in the far corner.

Wolfsburg’s Felix Klaus was sent off minutes later with the help of VAR after catching Manuel Akanji’s calf from behind. He looked dismayed to be sent off, but left the field without protest.

Dortmund sporting director Michael Zorc confirmed before the game that Mario Götze will leave once his second spell at the club ends in the summer.

Borussia Mönchengladbach was silently cheered on by 13,000 plastic cutout fans in the stands, but couldn’t help slumping against Bayer Leverkusen 3-1 at home.

Two goals from Kai Havertz, the second a penalty confirmed by VAR, and another from Sven Bender lifted Leverkusen above Gladbach into fourth place, Germany’s last to qualify for the Champions League.

As well as the cutouts of real supporters, Gladbach’s stands were adorned with banners protesting against games without spectators.

Also, Werder Bremen held on for a 1-0 win over Freiburg, which had a late equalizer ruled out through VAR after Bremen midfielder Philipp Bargfrede was sent off, and last-place Paderborn drew with Hoffenheim 1-1.