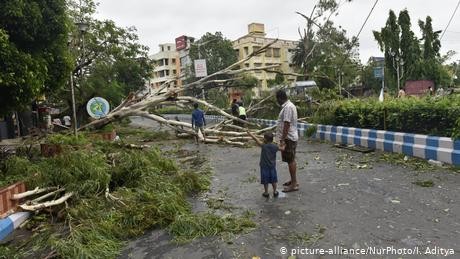 Thousands of residents of the Indian city of Kolkata took to the streets on Saturday to protest what they said was the slow government response to power cuts and flooding in the aftermath of "super cyclone" Amphan.

Cyclone Amphan tore through India's eastern state of West Bengal this week, causing some 1 trillion rupees ($13 billion, €11.9 billion) in damage to infrastructure and crops, state officials said. The powerful storm was the fiercest to hit India and Bangladesh since 1999.

Some 112 people were killed in the two countries and now authorities are struggling to grapple with the cleanup efforts, while also trying to stop the spread of the coronavirus.

More than 3 million people were evacuated ahead of Amphan's arrival, which helped prevent a large number of deaths.

Still, residents vented their anger for the second day in Kolkata, demanding more action from public officials to get the city of 15 million people working again.

"The coronavirus made our lives miserable, Cyclone Amphan turned it into hell," Subash Biswas, protester and principal of a state-run college in the city told AFP.

Many areas remain flooded, electricity services continue to be interrupted and many streets are still blocked by trees.

State disaster minister Javed Khan said hundreds of villages had been flooded after more than 70 kilometers (43 miles) of river embankments were washed away.

"The devastation was so intense that many areas remain inaccessible even three days after the cyclone," Khan said.

Read more: Coronavirus weddings: How Indians are tying the knot amid pandemic

Kolkata's municipal chairman Firhad Hakim has warned that "it will take at five to six days to pump out the water from streets, to clear the uprooted trees and restore the water supply."

Authorities are also trying to clear floodwater from Kolkata airport before domestic flights resume across India on Monday after a two-month coronavirus shutdown.

The cyclone has affected more than 13 million people in West Bengal and damaged over 1.5 million homes.