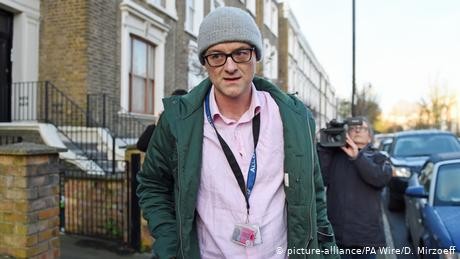 Cummings is considered a key member of the 2016 pro-Brexit campaign and the man responsible for helping Johnson become prime minister last year.

The Daily Mirror and The Guardian newspapers reported that Cummings left his London home and traveled to his parents in Durham, some 400 kilometers (248 miles) in the northeast of the country with coronavirus symptoms.

Police in Durham confirmed that on March 31 they had been tipped off about someone who had traveled to the city from London and did a routine check.

"Officers made contact with the owners of that address who confirmed that the individual in question was present and was self-isolating in part of the house," the police said in a statement.

"In line with national policing guidance, officers explained to the family the guidelines around self-isolation and reiterated the appropriate advice around essential travel," the statement added.

Cummings' trip to Durham took place just a week after Johnson's government instituted a lockdown that restricted travel to emergency reasons and required people infected with the virus to self-isolate for seven days.

Downing Street earlier confirmed that Cummings was infected and self-isolating with virus symptoms, but did not disclose any trips.

On Saturday, a spokesperson for Johnson responded to the reports, insisting that Cummings had not broken lockdown guidelines.

"Owing to his wife being infected with suspected coronavirus and the high likelihood that he would himself become unwell, it was essential for Dominic Cummings to ensure his young child could be properly cared for," the spokesperson said.

"At no stage was he or his family spoken to by the police about this matter, as is being reported. His actions were in
line with coronavirus guidelines. Mr Cummings believes he behaved reasonably and legally."

Calls for his resignation

However, the main opposition Labour party said the reports suggested Cummings viewed himself as above the law, while the smaller Liberal Democrats party has hinted that the incident could mean Cummings should resign.

The Scottish National Party's Westminster leader, Ian Blackford, also called for Cummings' resignation. "Following the news that Dominic Cummings traveled from London to Durham during lockdown and his behavior was investigated by the police, his position is completely untenable - he must resign or be sacked," Blackford wrote on Twitter.

Cummings would not be the first public official in the UK that has had to resign or lose their job over flouting lockdown rules.

Earlier this month, leading epidemiologist Neil Ferguson quit a government panel on coronavirus after admitting to having broken the lockdown to meet his lover.

Scotland's chief medical officer, Catherine Calderwood, resigned in April after breaking her own rules by visiting her second home twice.