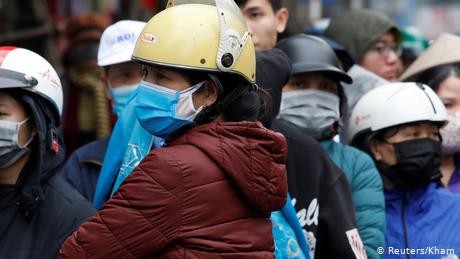 Despite a global economic crisis and likely recession in some of its neighboring countries, Vietnam aims for an economic growth of 5% this year. The ambitious goal was announced by Vietnam's Prime Minister Nguyen Xuan Phuc during a recent online conference with thousands of foreign and local business representatives.

The ambitious goal is significantly higher than the prediction of the International Monetary Fund (IMF), which announced that it's expecting Vietnam's gross domestic product (GDP) to grow 2.7%. Even that prediction puts Vietnam ahead of its neighbors and ensures that the country will continue to be Southeast Asia's fastest growing economy. The forecast growth rate, however, is in stark contrast with the 7% expansion of 2019.

The government in Hanoi expects the economy to benefit from the nation's thus far successful fight against the novel coronavirus. Until now, Vietnam has recorded 324 COVID-19 infections and zero related deaths.

The country hasn't seen new locally originated cases in weeks. All recent infections have been imported cases of Vietnamese who were repatriated from countries that suffer from much severe outbreaks of the virus.

Experts believe that Vietnam was able to contain the virus because it acted quickly and decisively. Hanoi decided to close schools, shut down borders and suspend international travel much earlier than other nations. The country also set up quarantine camps, where tens of thousands of travelers arriving from overseas were quarantined for 14 days.

Although the measures were drastic, Vietnam receives praise from all over the world for how it has handled the outbreak. With the economy restarting, Hanoi hopes to use this newly gained trust to attract more foreign investors and businesses.

'Ambitious but not unrealistic'

Adam McCarty, the chief economist of research and consultancy firm Mekong Economics, expects that Vietnam will widely benefit from how it has handled COVID-19. "Maybe this is a turning point where Vietnam leaves the group of countries as Cambodia and the Philippines and joins more sophisticated countries as Thailand and South Korea, even though Vietnam doesn't have a similar GDP yet," McCarty told DW from Hanoi.

The economist said that Vietnam has shown the world that it can manage a complex threat as the coronavirus health crisis. "They're showing that they can handle it much better than most European countries and the US. That's a signal to foreign investors and to foreign governments."

Vietnam hopes to continue the trend that started a few years ago. After trade tensions between the US and China began to rise, some companies moved their production from China to Vietnam. With comparatively cheap labor, a young population and a relatively open investment climate, the Southeast Asian country is often seen as a good alternative for mass production in China.

Vu Minh Khuong, associate professor at the National University of Singapore, said that the Vietnamese government's goal is "ambitious but not unrealistic." Khuong told DW that he expects more foreign investments and more reallocation from China. Furthermore, COVID-19 has strengthened Vietnam's social capabilities and given a boost to digitalization, he said. "Thanks to the pandemic, Vietnam has made leapfrogging progress in digital transformation. The rate of online transactions in public services increased from 12% to 24% during the two-month lockdown."

Khuong also said that he expects strong government investment and private consumption to boost the economy.

Read more: How Vietnam is winning its 'war' on coronavirus

But even though Vietnam is expected to outperform its regional rivals — Thailand, for example, expects its economy to shrink by as much as 6% — Vietnam won't come out of the crisis undamaged. In the first quarter of this year, nearly 35,000 businesses withdrew from the market, the Vietnamese newspaper VNExpress reported, based on a survey by the Vietnam Chamber of Commerce and Industry. Vietnam's economy grew 3.8% in the first quarter, the lowest figure in 11 years.

Sectors like tourism and export-related industries are having a particularly hard time. Foreign tourists are no longer able to reach popular destinations like Ha Long Bay and Hoi An after the country closed its borders and shut down all international flights. Garment factories have seen a sharp decline in orders because of a plummeting demand for clothes and shoes.

"With the rest of the world still suffering from COVID-19, exports are really going to get hurt," McCarty said. The economist stressed that things cannot just go back to how they were. And even though domestic consumption is likely to increase in the months to come, a 5% growth figure for 2020 may be too ambitious. "It's probably more like 3%, but that's still good in these circumstances. It still means Vietnam is a winner."