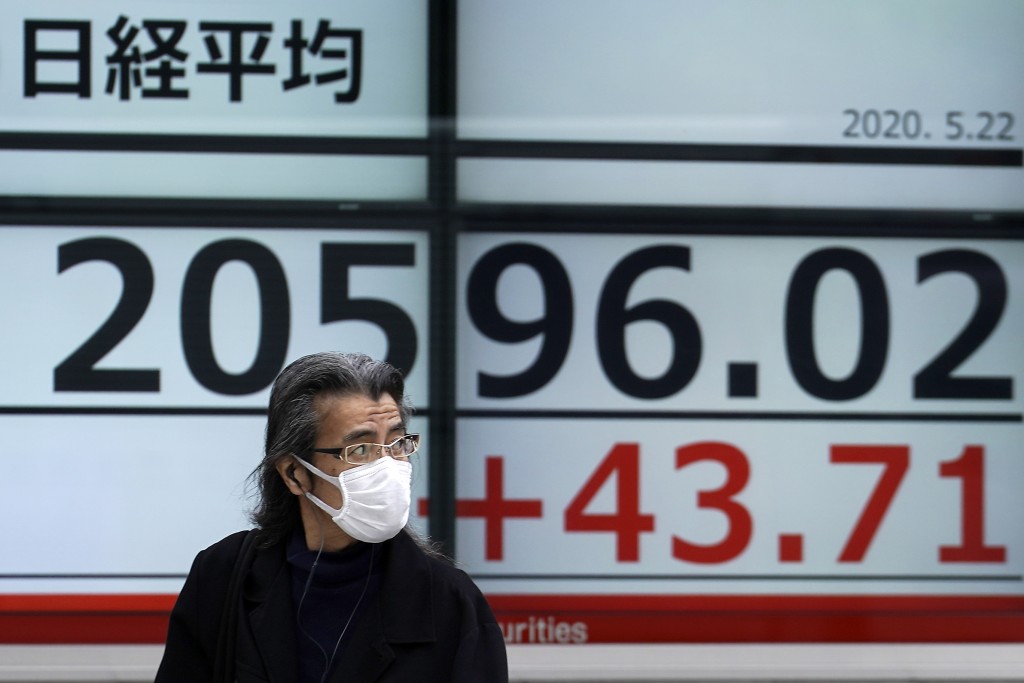 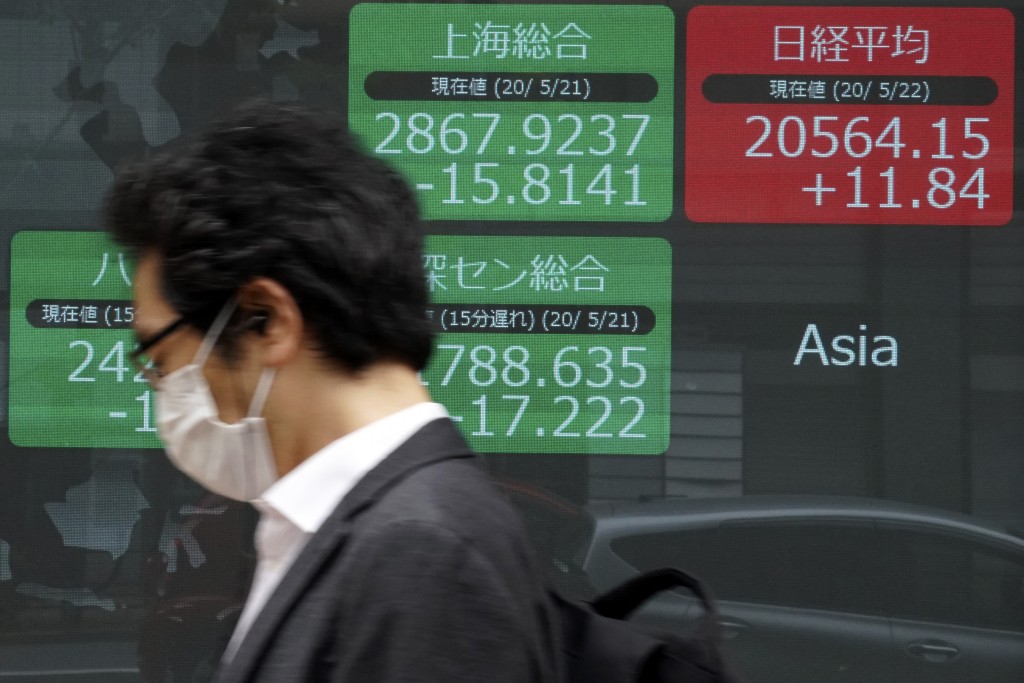 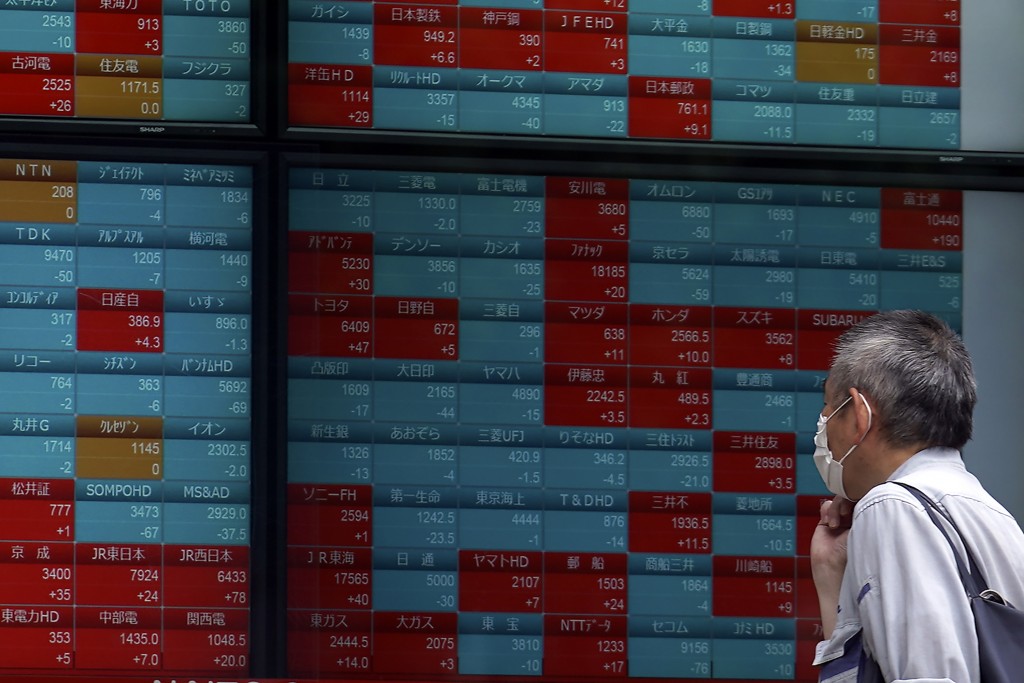 Shares slipped in Asia on Friday (May 22) as tensions flared between the U.S. and China and as more job losses compounded the economic fallout from the coronavirus pandemic.

Hong Kong’s Hang Seng sank more than 5% on Friday after legislation that could limit opposition activity in the former British colony was presented to China’s ceremonial parliament.

Mass protests in the southern Chinese financial hub grew increasingly violent last year and only abated somewhat as the city fought off the coronavirus pandemic. Authorities have since cracked down on dissent, arresting some of Hong Kong's veteran pro-democracy figures and alleging they were behind the demonstrations that largely were driven by young students.

“Traders around the world are playing the waiting game to see details of the new Hong Kong law to gauge how severe the terms are," Stephen Innes of AxiCorp said in a commentary.

More specifically, he said, will be the U.S. response to the possible impact on Hong Kong’s special economic status. Under the terms of Britain's handover of control of the territory to Beijing, the city kept its own trade regime and finances and a legal system based on western-style civil liberties that are denied to people living in other parts of China.

Shanghai's Composite index fell 1.6%, to 2,820.87 despite a promise by Chinese Premier Li Keqiang, the top economic official, to provide 2 trillion yuan ($280 billion), among other stimulus measures, to help revive the country's economy and curb job losses from the pandemic.

Li told the opening session of the national legislature that Beijing would set no economic growth target in order to focus on fighting the disease. He warned in his annual report to lawmakers that the battle against the pandemic isn't over and urged the country to “redouble our efforts” to revive slumping economic growth.

India's Sensex declined 1.2% despite a cut in the benchmark interest rate to 4%, the lowest level in a decade, as the central bank governor forecast the economy would fall into a contraction this year.

On Wall Street, the S&P 500 gave up 0.8% to 2,948.51 on Thursday after the White House issued a report attacking Beijing’s economic policies and human rights violations.

The selling was tentative at first, but gained momentum as the day progressed. Initially, traders reacted to the White House attacking China, which expands on get-tough rhetoric President Donald Trump hopes will resonate with voters angry about Beijing's handling of the disease outbreak.

Beijing’s handling of Hong Kong is among the major points of contention.

Meanwhile, the State Department announced that it had approved the sale of advanced torpedoes to the Taiwanese military, a move sure to draw a rebuke from Beijing, which regards the island as a renegade province.

The government's latest weekly snapshot of applications for unemployment aid didn't help. The Labor Department said more than 2.4 million people applied for U.S. unemployment benefits last week. All told, the running total of Americans who have lost their jobs in the two months since the coronavirus led to a near shutdown of the economy has climbed to 38.6 million.

Despite a week of uneven finishes, Wall Street looks set to recoup its losses from last week after a strong rally on Monday that reversed all of the market’s losses for the month. The index is still down about 13% from its high in February.

The National Association of Realtors said sales of previously occupied U.S. homes plunged 17.8% in April as the housing market remained hobbled by the coronavirus shutdowns. The downbeat report didn't hurt homebuilder stocks, which climbed broadly. The pullback in sales came as the inventory of properties on the market fell to a record low last month. A drop in homes for sale favors builders because it represents less competition. Meanwhile, Freddie Mac said mortgage rates eased this week, another favorable trend for builders. KB Home led the sector, gaining 5.2%.

Crude oil started the year at about $60 a barrel, but plummeted earlier this year as demand sank due to widespread travel and business shutdowns related to the coronavirus. The price has risen this month as oil producing nations cut back on output and the gradual reopening of economies around the globe have driven up demand.

The yield on the 10-year Treasury note, a benchmark for interest rates on many consumer loans, fell to 0.64% from 0.66% late Thursday.