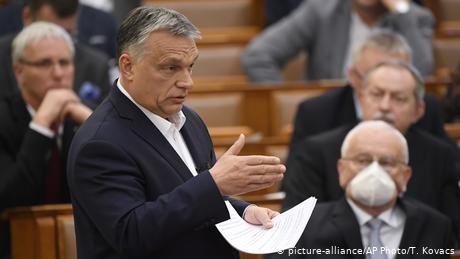 One of Hungary's main opposition parties, the left-leaning Democratic Coalition (DK), had its budget funding suspended in a move they denounced as politically motivated on Thursday.

The State Audit Office said that the financial statement presented by the party failed to show "a reliable and real picture" of the group's finances in 2017-2018, when the party received some $1.57 million (€1.43 million) in state money.

Responding to the move, the DK accused the office of working on orders from Prime Minister Viktor Orban. The officials had demanded papers that were destroyed in the fire that tore through their Budapest headquarters in 2018, they added. Nobody was injured in the blaze, as the party offices were empty at the time.

"And since these papers... really did burn in a fire, which is why we will never be able to present them, the suspension of state funds for the DK could last forever," the party said on their website.

They added that their mouths "would not be shut by withdrawing state support."

The country's top audit official, Laszlo Domokos, is a former lawmaker of Orban's ruling Fidesz party. Domoko's office has slapped sizable fines on several opposition parties or suspended their funding due to alleged irregularities in recent years, according to the AP news agency.

DW sends out a daily selection of news and features. Sign up here.