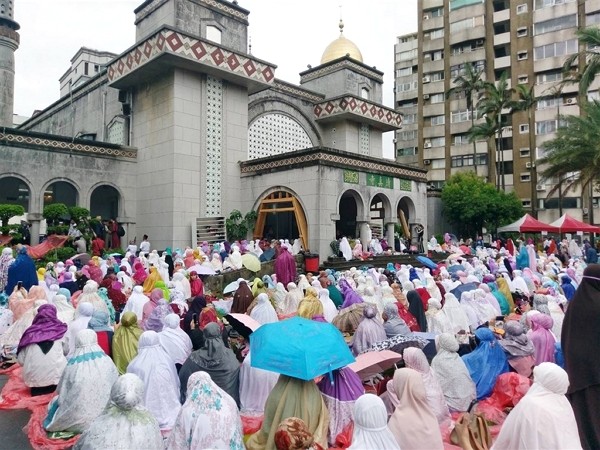 Most Muslims in Taiwan will celebrate the annual Eid al-Fitr festival this year by praying at home instead of gathering in large numbers at mosques and other venues, as is the custom, due to the COVID-19 coronavirus pandemic, some of them said.

Eid al-Fitr, which marks the end of the fasting month of Ramadan, will be observed by some 300,000 Muslims in Taiwan this year on May 23 or 24, depending on the sighting of the moon.

Muslims in Taiwan usually celebrate Eid al-Fitr, the Festival of Breaking the Fast, by praying at mosques and gathering with friends in places like train stations and parks.

In light of the government's social distancing guidelines, however, Taipei Grand Mosque has canceled its Eid al-Fitr prayers for the first time in 60 years, as it cannot guarantee that worshippers would be able to remain 1.5 meters apart, one of its officers Wang Meng-long (王夢龍) said.

Mosques in Taoyuan and Taichung have also made a similar decision, Kimyung Keng (何景榮), a social activist and second-generation immigrant, told CNA.

At Taipei Train Station, one of the most popular Eid al-Fitr venues, mass gatherings have been banned until the end of July, as part of the Taiwan government's COVID-19 prevention measures.

In an effort to adhere to Taiwan's COVID-19 prevention regulations, Keng said, his Muslims friends have decided to pray at home this year, as the essence of Eid al-Fitr is introspection, piety and charity.

Huiyee Chiew (周慧儀), public relations officer for One-Forty, a group dedicated to building vocational skills among migrant workers, told CNA that although some Muslims migrant workers might gather in small groups on Eid al-Fitr, many of them have said they would prefer to pray at home or chat with their loved ones on video calls.

Meanwhile, the Ministry of Labor has urged Muslim migrant workers to follow the government's COVID-19 guidelines as they celebrate Eid al-Fitr, and it called on employers to respect their workers' right to freedom of religion.

The government guidelines include wearing a face mask in crowded places, maintaining social distancing, observing personal hygiene, avoiding talking while eating with others, and ensuring good ventilation in living and work spaces.