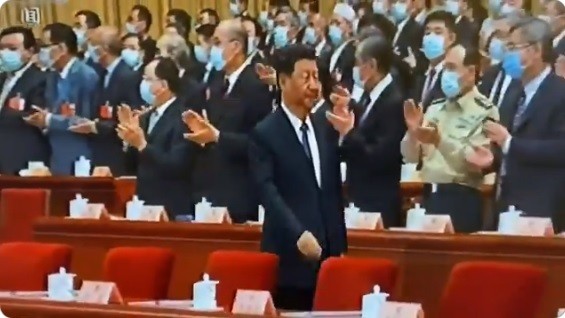 The meeting, which is the first of China's "Two Sessions," was delayed by two months because of the Wuhan coronavirus (COVID-19). The event, which combines meetings of the CPPCC with the National People's Congress, is still being shortened to one week from the usual two due to the ongoing pandemic.

Although China was quick to claim victory over the virus, touting zero local infections on March 18, there have since been several new local outbreaks in Guangzhou, Shenzhen, Heilongjiang, Jilin, and again in Wuhan. Even Chaoyang District of the capital city of Beijing was listed as high-risk due to a cluster infection in late April. Since the start of the outbreak, China has been heavily criticized for undercounting the number of infections to give the impression that it has the outbreak well under control. Last week, Chinese media published the results of a study estimating that Wuhan actually has approximately 500,000 cases of coronavirus, 10 times the official numbers, only to quickly yank it offline.

The "Two Sessions" are a litmus test to see how well China has actually brought the virus under control. The fact that it is being held at all is a sign to some that China has arrested the virus to such an extent that it feels safe to cluster all of its leaders together for the massive event. However, the sight of thousands of Chinese Communist Party (CCP) officials all wearing surgical masks indicates that the virus is still potentially at large, even in the capital.

Bill Birtles, China correspondent Australian Broadcasting Corp.'s (ABC) China correspondent, captured the opening ceremony with his smartphone as it was broadcast on state-run CTTV Thursday afternoon. He then posted it on Twitter, noting what an "extraordinary sight" it was to witness thousands of top leaders wearing masks.

Extraordinary sight - masks for all but the top leaders and a few others in the front rows at China’s People’s Consultative Conference. #coronavirus pic.twitter.com/bJ0xZgJbbd