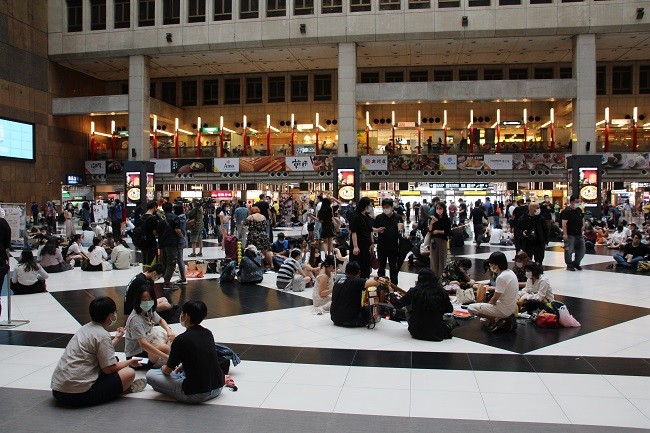 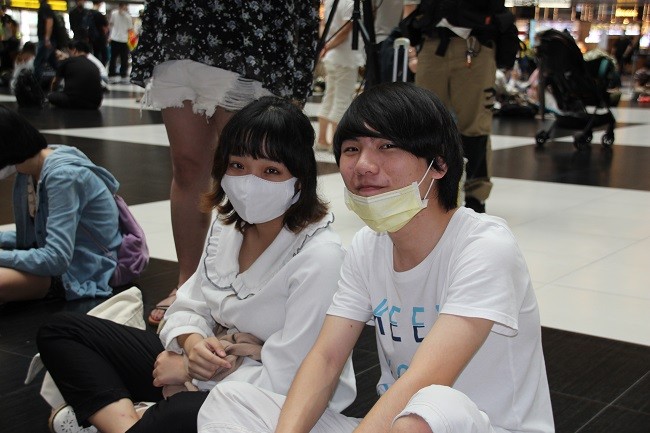 TAIPEI (Taiwan News) — Hundreds staged a sit-in at Taipei Main Station on Saturday (May 23) to protest a proposed ban on sitting in the lobby, which would deprive the country's Southeast Asian communities of a longtime favorite spot for weekend rendezvous.

Taipei Railways Administration (TRA) in February announced it was banning visitors from sitting in the lobby of the central transportation hub to mitigate the risk of the coronavirus spreading. It also prohibited exhibitions and other events from taking place on the sprawling, checkered floor of the hall.

On May 18, TRA said it was weighing extending the moratorium on sitting indefinitely, citing health and image concerns. Station Master Huang Jung-hua (黃榮華) noted how orderly the space had become since the measure took effect and floated installing seats for waiting passengers.

The announcement did not sit well with some, with those opposed arguing such a move would be a blow to openness and inclusivity. Transportation and Communications Minister Lin Chia-lung (林佳龍) voiced support for re-opening the lobby to all, including the migrant workers who gather there.

An event titled "Sit-in At Taipei Main Station" sprung up on Facebook earlier this week, and starting around noon on Saturday, several hundred people began trickling in to begin the occupation.

Xinyi, a National Taiwan Normal University student pursuing her Master's in mass communication, pointed out that although TRA had cited hygiene as a reason, Taiwanese gather in public spaces throughout the city, such as Chiang Kai-shek Memorial Hall, and groups of dancing students are a particularly common sight in MRT stations — yet pose little danger to public health. She argued holding foreign workers to a different standard would be unfair and even discriminatory.

A group of Indonesian women engaged in animated conversation who were standing at the outer edge of the room said they had not been aware of the sit-in. They had come from Hualien, where they work as caretakers for elderly Taiwanese, and said this was their first chance in four to five months to see friends living in other parts of the island, as their employers had not allowed them to leave town until today. His other reason was to protest the TRA's proposed rule over the effect it would have on Southeast Asian laborers' way of life: "Because it's a public place, it should be open to everyone. It shouldn't be closed... We support their culture and their rights in Taiwan." Asked for his view on the stated rationale for the change, he responded, "There are so many issues on this topic to discuss, but I think it's a problem in Taiwan society. When something can be debated, they just shut it down first and don't give us room to discuss — maybe [about adding] more seats here or how it can be used or about public space and its meaning." A number of other demonstrators also came out to show solidarity with Hong Kong, which is back in the spotlight after China's National People's Congress opened this week with a bill that would crack down on "subversive" activities in the city, where law enforcement has become ever more draconian since mass protests began nearly a year ago. The legislation has raised fears that this is the last nail in the coffin of the "one country, two systems" framework promised to Hong Kong by Beijing.

Taiwan News also spoke to one of the Hongkongers present at the sit-in, a student who goes by Max. Max said he hopes Taiwanese will watch closely what China is doing in the special administrative region. By understanding China's behavior, he added, Taiwan can hopefully take measures to protect its freedom and independence, and by doing so avoid a similar fate.