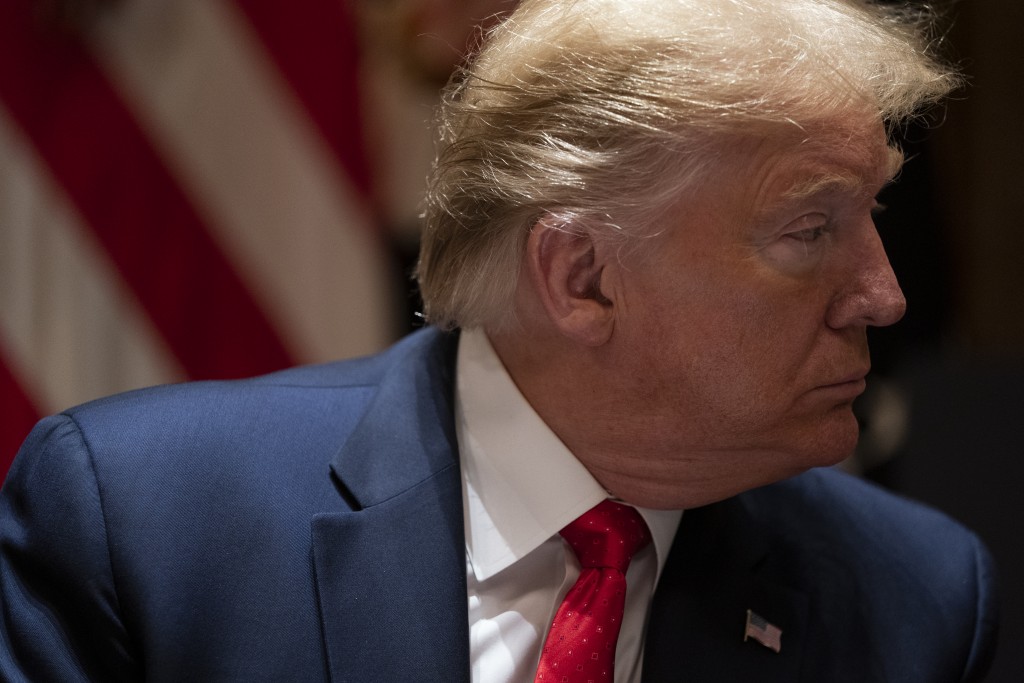 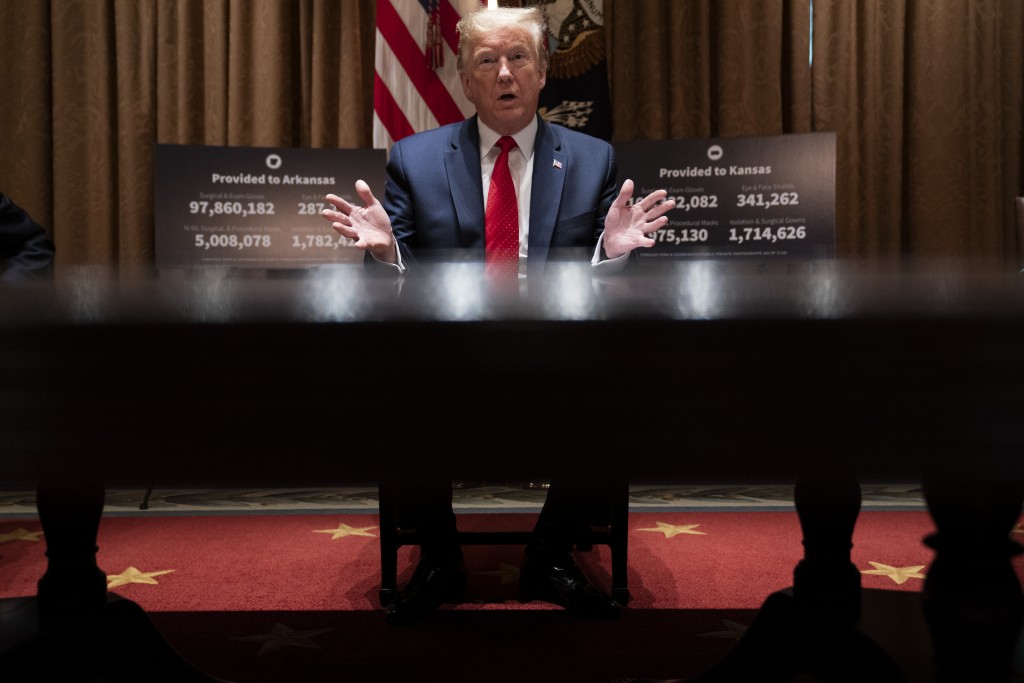 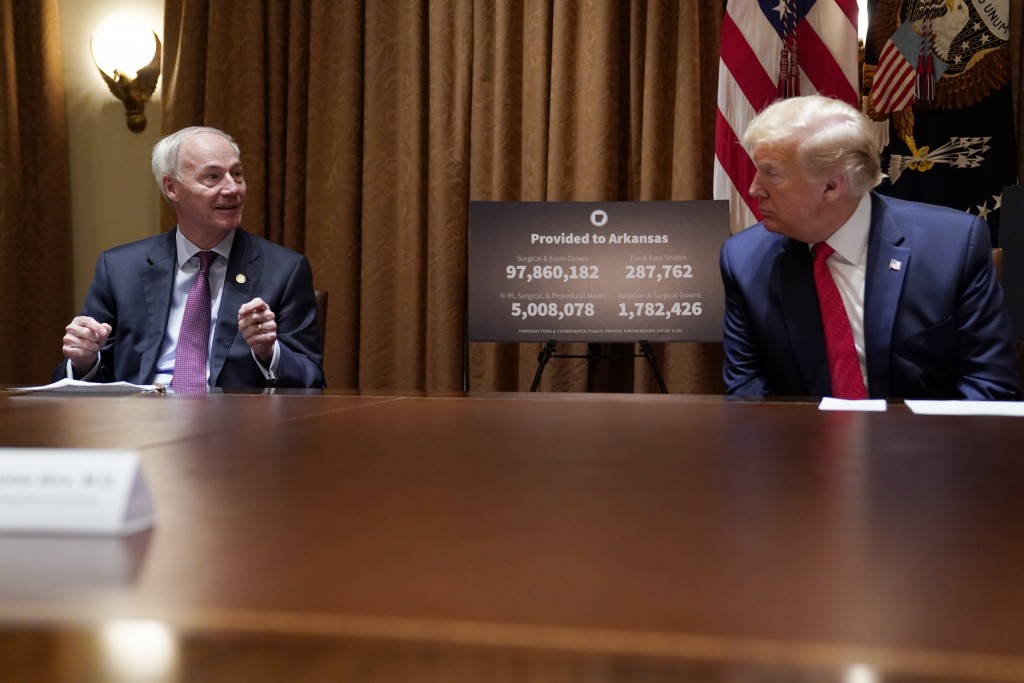 WASHINGTON (AP) — President Donald Trump is running against himself.

With his cries to “Reopen our country!” and his rebukes of the federal bureaucracy and health regulations amid the coronavirus pandemic, Trump has tried to tap into the same populist, anti-Washington anger he rode to victory in 2016. The difference: He is now, by definition, the face of government.

Positioning himself as the outsider despite being the incumbent, Trump has feuded with governors, pushed back against government restrictions and, this week, said he was taking an unproven anti-malarial drug against the coronavirus despite warnings from his own health experts.

Aiming to energize his base less than six months before he stands for reelection, the president has drawn a cultural link between the disaffected who voted for him four years ago and those who want to quickly restart the nation’s economy. Amplified by conservative media commentators, Trump has leaned into the pandemic’s partisan divide and urged states to reopen regardless of whether they meet the benchmarks set by the Centers for Disease Control and Prevention.

On Monday, he was even more direct, tweeting in capital letters: “REOPEN OUR COUNTRY!”

The president's political advisers contend that, even after four years in the White House, Trump will always be an outsider compared to his likely general election opponent, Democrat Joe Biden, who spent more than four decades in Washington.

Trump has also worked to cultivate that image throughout the coronavirus crisis.

He has encouraged right-wing protests against states’ stringent social distancing orders, unleashing a series of tweets calling to “Liberate!” Michigan, Minnesota and Virginia. Many who attended the rallies sported Trump campaign apparel and “Make America Great Again” hats and signs, drawing the president’s support, though the protests were small and received widespread condemnation for potentially spreading the virus.

But the president’s praise echoed across the internet and on cable television by conservative pundits and conspiracy theorists, stoking a fury that in its anti-government rhetoric echoed the birth of the tea party movement a decade ago.

Especially after the virus reached the United States, grabbing the mantle of the outsider was a natural play for Trump. Over the last century, history has favored incumbents seeking reelection — except for those in times of fundamental anxiety.

“If Trump runs as an outsider, he will, as ever, be playing for base turnout rather than seeking votes in the tiny but still real middle,” said presidential historian Jon Meacham. “Can he convincingly run as an insurgent against his own government? I fear the answer is yes, and his people will thrill to it. The question will come down to whether voters choose the evidence of the last four years or Trump’s addled version of those four years.”

Trump has turned his wrath against a number of Democratic governors, including those who lead battleground states like Pennsylvania and Michigan, declaring they were ungrateful for the federal government’s assistance and insinuating they were moving slowly to reopen in order to perpetuate a damaged economy that would wound Trump’s electoral chances.

Biden has pushed back, putting the failures of the nation’s pandemic response squarely on Trump, whom he blames for missing early warning signs and being slow to ramp up national programs for testing and treatment. Democrats believe that Trump’s strategy will have limited appeal.

“The sliver of voters who will ultimately decide this election — independents and moderate Republicans — see Trump as the ultimate Washington insider, someone who uses the power of the executive branch to benefit himself, his cronies and his business interests," said Adrienne Elrod, former senior adviser to Hillary Clinton’s 2016 campaign.

Showing no hesitation in making the pandemic a partisan battle, the president’s advisers have tried to move the focus away from the coronavirus public health crisis — more than 90,000 Americans have died — in order to emphasize the need for an urgent economic recovery.

“The first step in getting our economy booming again is to begin to reopen,” said Trump campaign spokeswoman Sarah Matthews. “Americans know the economy reached unprecedented heights under President Trump’s leadership before it was artificially interrupted by the coronavirus, and he will build it back up a second time.”

The president has also repeatedly rebelled against the health guidelines set by his own administration, refusing to wear a mask or maintain proper social distancing. He pushed the use of hydroxychloroquine despite the cautionary advice of the government’s top medical experts — and then said he had begun to use it himself — as he argued that his own instinct was better than their expertise.

His administration silenced public health professionals so that Trump himself would serve as the face of the response to the virus and has been outspoken in criticism of experts at the CDC for bungling early COVID-19 testing. White House officials complained of “rogue” CDC experts who leaked drafts of detailed, restrictive guidelines for businesses and other institutions reopening that the White House wanted eased to account for economic considerations.

The approach is reminiscent of Trump’s longtime complaints about an alleged “deep state” of established government officials that he has claimed is working to undermine him. But COVID-19 and its demands for management expertise have thrown a wrench into the campaign’s plans to fully paint Biden as an insider.

Trump’s scattered approach to the coronavirus pandemic largely followed his efforts to balance the incongruous roles of wartime president and insurgent populist.

Early on, he dismissed the dire warnings of experts, intent on talking up a booming economy that he viewed as vital to his reelection. But when the pandemic became too large to ignore, he began using wartime powers like the Defense Production Act to try to marshal the government’s response even as he tried to rewrite the Washington playbook by deferring to the states.