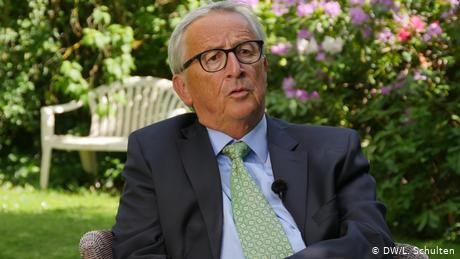 Jean-Claude Juncker has given his backing to a joint French and German plan to rescue EU economies after the coronavirus pandemic.

In an interview with DW at his Luxembourg home, the 65-year-old former president of the European Commission hailed the €500 billion ($550 billion) idea as "the right response" and "absolutely necessary," but warned a failure to agree a deal would mean "a very serious existential crisis for the EU."

Juncker, whose five-year term as the Commission's head came to an end in November last year, also said he hoped the acts of solidarity on display during the pandemic would make people "better Europeans."

Final response should be 'close' to French-German plan

In response to COVID-19, most EU countries shut down their economies to stop the virus spreading. They are now facing deep recessions after businesses and industries were closed for several weeks.

German Chancellor Angela Merkel and French President Emmanuel Macron are lobbying the rest of the EU to back their joint plan, which would see the EU issue debt to raise €500 billion on the financial markets to give as grants to regions and sectors hardest hit by COVID-19.

"I do think the proposal put forward by Germany and France is the right response," Juncker said. "It allows the European Union to respond with solidarity, especially for members in southern Europe. This is absolutely necessary."

His successor as Commission president, Ursula von der Leyen, is facing a difficult situation, however. Italy and Spain — the most affected EU countries — are behind the idea, but other member states such as Austria, Denmark and Sweden are arguing against allowing the EU to take on debt to boost economies, and want the money to be given as loans, not grants.

"Every country, every government and later every national parliament has the right and the duty to closely examine this proposal," admitted Juncker. "But I would like to think that the final response will be very close to the German and French plan."

People will be 'better Europeans' after the crisis

Portuguese Prime Minister Antonio Costa said if the EU can't create a rescue fund, it will have failed.

Asked about Prime Minister Costa's comments, Juncker said he had heard such warnings before, but added, "if we can't muster a minimum of solidarity to tackle this together and create a common future, then Europe is in a very serious existential crisis."

If the rescue fund proves divisive or unpopular, it could create new political space for populist and anti-EU parties. Juncker's tenure as EU Commission chief coincided with a rise in populism across Europe. Anti-EU parties polled increasingly well in national and EU elections, including Matteo Salvini's League (Lega) party in Italy and the right-wing populist Alternative for Germany (AfD) in Germany. The United Kingdom also voted to leave the EU in the 2016 Brexit referendum.

But Juncker does not believe more people will turn to anti-EU parties after the crisis. "The populists will of course use this crisis to explain how we need stricter border controls, that every country would be better off dealing with the crisis individually," he said.

"But I believe the people of Europe have learnt from this crisis. They've learnt that one country alone will not beat this crisis. We have to all pull in the same direction."

He added that a consequence of the acts of solidarity people have shown each other "will be that after the crisis we'll all be better people and better Europeans."

Juncker was less glowing in his assessment of internal border closures across the EU, arguing that shutting them has been ineffective in combating COVID-19.

Watching the news from his home in Luxembourg, where he was prime minister from 1995 to 2013 before resigning over a wiretapping scandal, he said the country had been particularly hard hit by border closures with Germany.

"It forced tens of thousands of German cross-border travelers to make huge detours. It was nonsense," stated Juncker. "They closed the borders without thinking about the people who'd be the victims of such an arbitrary decision."

"It certainly wasn't a grand display of statesmanship."

Juncker said he had spent his lockdown working normally, giving interviews and that he had not "suffered from an urge to declutter."

He remained cryptic on whether the crisis made him miss politics and the EU Commission, simply replying he had "squared so many circles over the years."

But he had a few kind words for the current Commission president. "I have full faith in Mrs von der Leyen and that she won't fail in her attempt," he said. "She's doing a good job."