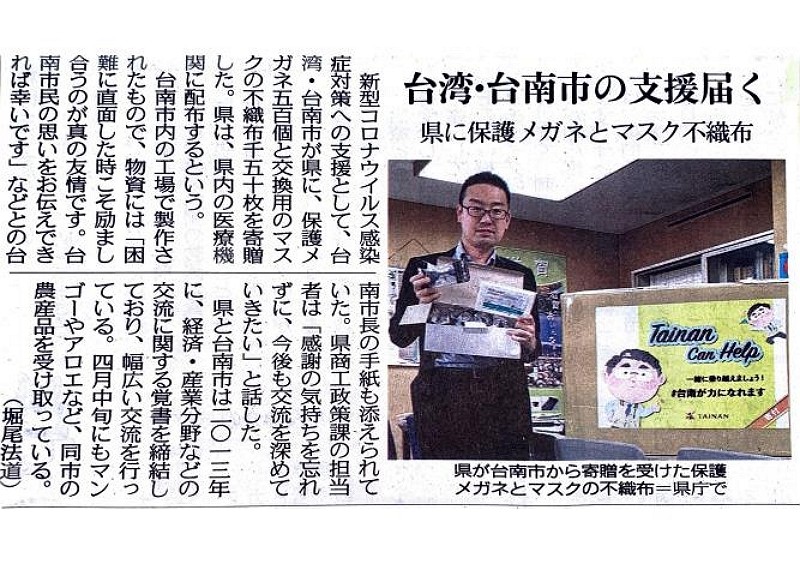 TAIPEI (Taiwan News) — A host of Japanese cities have expressed their gratitude to Tainan for its donations of medical supplies, a city version of the “Taiwan Can Help” campaign.

The southern city in Taiwan has made donations of locally-made goggles and non-woven cloth mask replacement inserts to 16 cities in Japan in a “Tainan Can Help” bid. It has received thanks for its generosity, with news of the donations grabbing headlines on various media outlets.

The humanitarian aid was sent in a reciprocal gesture for the funds and support pledged by Japan in the wake of a devastating magnitude 6.4 earthquake that rattled southern Taiwan on February 6, 2016. The quake inflicted significant damage in Tainan, said Tainan Mayor Huang Wei-che (黃偉哲).

Tainan has recorded 16 coronavirus (COVID-19) cases as of Tuesday (May 19), the lowest among the six special municipalities. Taiwan counted 440 confirmed cases and seven deaths on Tuesday, marking 12 days without any new cases.

With the disease easing in the country and protective gear in stable supply, Huang decided the city can contribute to the world through such donations. He hopes other cities will follow suit and play a role in promoting that Taiwan can help.