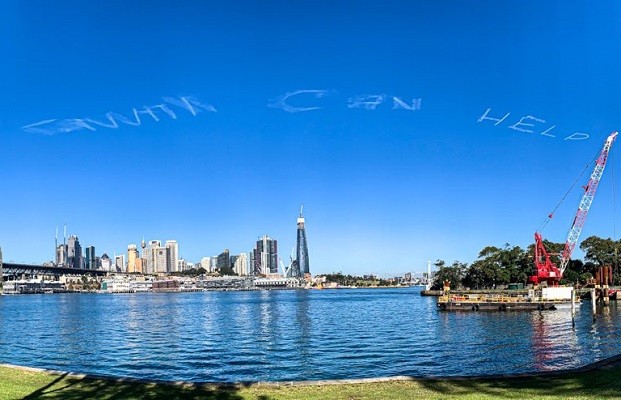 TAIPEI (Taiwan News) — The slogan "Taiwan Can Help" appeared for the third time in the skies over Australia on Tuesday (May 19) as part of a campaign by local Taiwanese doctors to build support for Taiwan's participation in the World Health Organization (WHO).

On Tuesday, skywriting was seen over Sydney Harbour forming the words "Taiwan Can Help," prompting many to capture the sky signage with their smartphones. This is actually the third time the message has appeared this way in Australia recently, with the first instance occurring above Sydney and Canberra on Saturday and Sunday (May 16 and 17).

The skywriting campaign was started by 26 Australia-based Taiwanese physicians to promote their nation's ability to assist countries in battling the Wuhan coronavirus (COVID-19) pandemic and to encourage Australia to support Taiwan's participation in the WHO, which held the second meeting of its 73rd annual World Health Assembly (WHA) that day, reported Formosa TV. The physicians managed to raise 10,000 Australian dollars (US$6,500) through their online campaign.

The following video was taken by Larry Chen in Sydney at Kirribilli on Tuesday at 11 a.m.

"Taiwan can help" - skywriting in Sydney CBD from r/taiwan