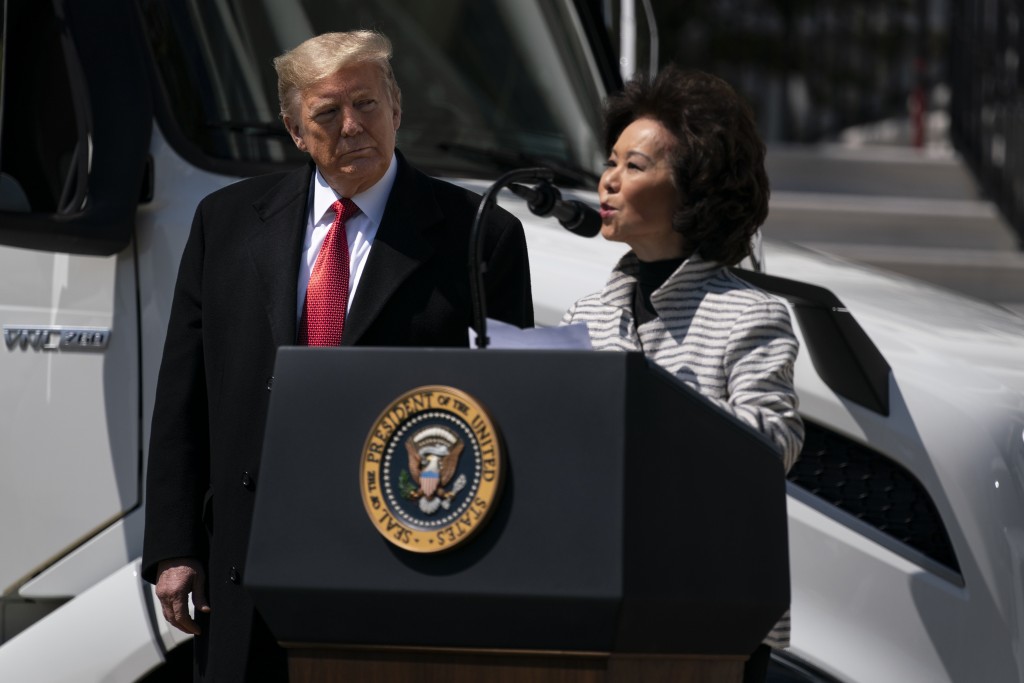 WASHINGTON (AP) — Congressional Democrats are protesting President Donald Trump's decision to remove the Transportation Department's acting inspector general, the latest in a string of actions by Trump to fire or replace government watchdogs.

The Democratic chairs of three House panels on Tuesday demanded that Mitch Behm be reinstated immediately as acting inspector general. The lawmakers also demanded that the Trump administration turn over information about current investigations that might have played a role in Behm's removal, including a review of whether Transportation Secretary Elaine Chao has given preferential treatment to Kentucky. Her husband, Senate Majority Leader Mitch McConnell, R-Ky., is seeking reelection.

Behm's removal “is the latest in a series of politically motivated firings of inspectors general by President Trump,'' the lawmakers wrote. "This assault on the integrity and independence of inspectors general appears to be an intentional campaign to undermine their ability to expose corruption and protect taxpayer dollars from waste, fraud and abuse.”

The lawmakers were referring to a series of actions by Trump in recent weeks, including his firing Friday night of State Department Inspector General Steve Linick. Democrats say Linick was probing how the State Department pushed through a $7 billion Saudi arms sale over congressional objections.

The removals of Linick and Behm are part of a pattern of Trump taking aim at inspectors general.

In April, he fired Michael Atkinson, the inspector general for the intelligence community, for his role in the whistleblower complaint that led to Trump’s impeachment.

Then Trump removed Glenn Fine as acting inspector general at the Defense Department. The move stripped him of his post as chairman of the Pandemic Response Accountability Committee, one of several watchdog groups overseeing the vast economic relief law passed by Congress in response to the coronavirus crisis.

Trump also has moved to replace an inspector general of the Department of Health and Human Services who wrote a report that found hospitals faced severe shortages of coronavirus tests and supplies. Trump questioned the veracity of the report and the independence of the HHS official, Christi Grimm. a career employee who has served as acting inspector general since January. Trump has nominated a permanent replacement, an appointment that requires Senate confirmation.

“The firings of multiple Inspectors General is unprecedented; doing so without good cause chills the independence essential to their purpose. It is a threat to accountable democracy and a fissure in the constitutional balance of power,” Romney tweeted Saturday.

Romney is the only Senate Republican who voted to convict Trump of abuse of power in his impeachment trial earlier this year. Trump responded to Romney's tweet by calling him a “LOSER” on Twitter.

Sen. Chuck Grassley, R-Iowa, has called for the White House to explain the dismissals of Linick and Atkinson, the intelligence community watchdog.

Grassley, a Trump ally, said Congress intended that inspectors general only be removed when there is clear evidence of unfitness, wrongdoing or failure to perform the duties of the office. “An expression of lost confidence, without further explanation, is not sufficient,” he said.

Trump has designated Howard Elliott, head of a Transportation Department agency that oversees pipeline safety, to replace Behm as acting inspector general. Elliott will keep his job at the pipeline agency, reporting to Chao, which the three House Democrats said was a conflict of interest.

The lawmakers asked for information regarding ongoing audits, inspections, investigations, evaluations, reviews and other communications regarding Behm's removal and Elliott’s qualifications to be inspector general.

Any attempt by Chao or her office to interfere with an inspector general’s investigation “is illegal and will be thoroughly examined by our committees," they wrote.