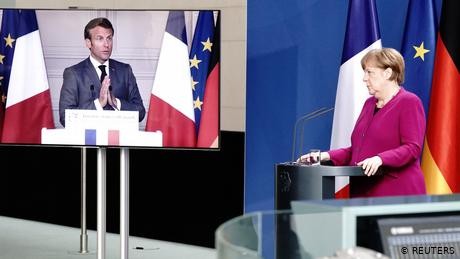 Political leaders in Germany and France went to bat for their proposed European Union economic recovery plan on Tuesday, the day after Chancellor Angela Merkel and President Emmanuel Macron presented the ambition €500 billion ($545 billion) to the public.

However, it was clear that they still have some convincing to do when it came to eastern European member states, as well as Austria.

"It's in the interest of all European countries to sign up for this initiative .... if there isn't this momentum, nobody will able to get out of it," French Foreign Minister Jean-Yves Le Drian told French broadcaster LCI, referring to some nations that may be reluctant to sign off on the deal.

At the same time, influential German politicians such as Justice Minister Katarina Barley and Finance Minister Olaf Scholz praised the plan. As did Armin Laschet, state premier of Germany's most populous state, North Rhine-Westphalia, who is hoping to run for chancellor during federal elections next year.

"This new €500 billion fund will make it possible for Europe to grow out of the crisis together and become stronger — I think that's a very good message not only for the economy and jobs but also for the future of the European Union," Finance Minister Scholz told reporters.

Since the pandemic began to spread in earnest in Europe, there has been much criticism about the EU from citizens of hard-hit countries such as Italy and Spain, who complained of a lack of solidarity with regards to both financial help and support in the form of medical equipment, from their northern neighbors. Euroskepticism has skyrocketed in Italy in particular in light of the crisis.

The Franco-German plan would see a one-off €500 billion rescue fund to help the European Union's economy recover from the impact of the pandemic.

Under the proposal, the funds would be given as grants to hardest-hit sectors and regions in the EU.

The 27 EU countries would also borrow together on financial markets to raise the funds. The proposed €500 billion in grants would be in addition to the 2021-2027 EU budget that is close to €1 trillion for this period.

Merkel stressed that this "unusual path" was a "short-term" response to the crisis and the that a long-term solution, including EU reforms, would be discussed later "because Europe must develop further."

However, the government of Austria said it would not budge on some changes to the plan it had already called for, including that payments be made in the form of loans and not grants, according a statement given to Die Presse daily.

The European Commission (EC) will propose a mix of grants and loans, unlike the Franco-German proposal, when it submits its economic recovery plan next week, its spokesman said.

The German chancellor also spoke of the plan with the leaders of the Visegrad Group (Hungary, Slovakia, Czechia, and Slovakia) on Tuesday. As eastern Europe has not been struck as hard by the pandemic as the west, and is home to some of the EU's staunchest Euroskeptics, it was expected that Merkel would work hard to convince them of the necessity of the plan.

There is also some resistance coming from within Merkel's own party, the Christian Democrats (CDU). Several federal CDU lawmakers said on Tuesday that they were taken aback by the announcement of the proposal, which felt rushed.

"I think it's wrong," CDU lawmaker Klaus-Peter Willsch told Reuters news agency. Willsch argues that the plan would see EU members shoulder debt according their size in the EU economy, which would lead to Germany holding a bigger burden. He said the proposal would "open Pandora's box."

Hans Michelbach, an economics expert and parliamentarian with the CDU's Bavarian sister party, the CDU, also voiced his concern about how the debt would be distributed.

The proposal is due to be voted on by EU members on May 27, when they also vote on the bloc's next budget.