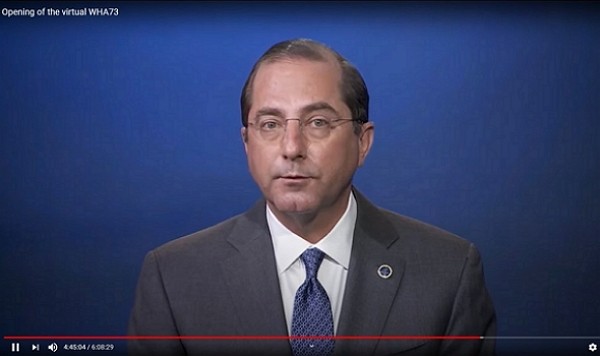 A top American official on Monday (May 18) pushed for Taiwan's inclusion in the World Health Assembly (WHA) after it was not invited to the annual meeting of the World Health Organization's decision-making body for a fourth straight year.

Speaking on the first day of the WHA's two-day virtual meeting, United States Health and Human Services Secretary Alex Azar said it was "critical" that Taiwan participate as an observer at the WHA "to bring the helpful perspective regarding their effective and exemplary response (to the COVID-19 pandemic)."

Noting that the WHO has barred Taiwan from WHA participation since President Tsai Ing-wen (蔡英文) was elected president, he said "the health of 23 million Taiwanese people should never be sacrificed to send a political message."

The main theme of Azar's 3-minute address was bashing the WHO and China.

He said a member state of the WHO "made a mockery of their transparency obligations, with tremendous costs for the entire world," in an apparent reference to Beijing.

"We must be frank about one of the primary reasons this outbreak spun out of control: there was a failure by this organization to obtain the information that the world needed. And that failure cost many lives," Azar continued.

"This cannot ever happen again. The status quo is intolerable," the secretary said. "WHO must change, and it must become far more transparent and far more accountable."

The U.S. supports an independent review of "every aspect of WHO's response to the pandemic," Azar said.

Azar was one of several representatives of countries that supported Taiwan's WHA participation on the WHA meeting's first day.

He accused WHO Director General Tedros Ghebreyesus of choosing "not to invite Taiwan under pressure" from Beijing despite having the "power and precedent" to include Taiwan in the assembly's proceedings.

"The Director-General's lack of independence deprives the assembly of Taiwan's renowned scientific expertise on pandemic disease, and further damages the WHO's credibility and effectiveness at a time when the world needs it the most," the statement said.

Pompeo said China's "spiteful action" to silence Taiwan "exposes the emptiness of its claims to want transparency and international cooperation to fight the pandemic, and makes the difference between China and Taiwan ever more stark."

He praised Taiwan's fight against COVID-19 as "one of the world's most successful efforts to contain the pandemic to date, despite its close proximity to the original outbreak in Wuhan, China."

He attributed Taiwan's success to its being a "transparent, vibrant, and innovative" democracy, in contrast to authoritarian regimes.

While Taiwan serves as "a model world citizen," Pompeo said Beijing "continues to withhold vital information about the virus and its origins, deny access to their scientists and relevant facilities, censor discussion of the pandemic within China and on Chinese social media properties, and casts blame widely and recklessly."

Taiwan participated in the WHA as an observer from 2009 to 2016, when Taipei's relations with Beijing were better under the then-Kuomintang administration.

Since 2017, however, China has persuaded the WHO not to invite Taiwan, in line with Beijing's hardline stance on cross-Taiwan Strait relations since Tsai of the independence-leaning DPP took office in May 2016.