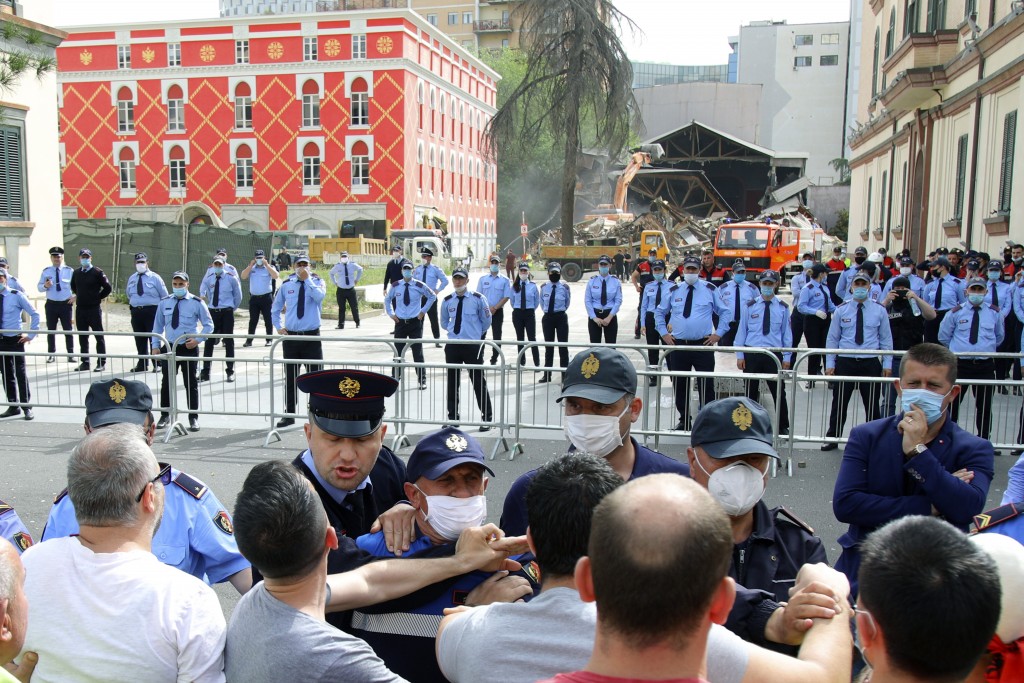 TIRANA, Albania (AP) — Albanian artists and opposition party supporters gathered for a second day Monday to protest the demolition of the crumbling National Theater building in the capital, which has triggered strong political tension amid a major heritage debate.

Defying a lockdown ban on mass gatherings, a few thousand people gathered near the Interior Ministry, close to the site of the building, to support the artists in their protest against Prime Minister Edi Rama's center-left government.

The theater was knocked down Sunday despite protests, although police had to first pull a group of artists and some opposition leaders away from the late 1930s Italian-designed building in Tirana before heavy machinery started to bring it down.

Artists belonging to the Alliance for the Theater Protection had pressed for the renovation of the old theater building which they consider a national heritage.

Albania's center-right main opposition Democratic Party condemned the demolition Monday, calling it a “macabre crime and flagrant violation of the constitution and the law.”

Participants in Monday's protest also voiced opposition to the government’s lockdown rules. Strong police forces were deployed at government buildings near the site where the theater had stood, which include the prime minister’s office and parliament too.

Rama, a former mayor of Tirana, says a new 30 million-euro ($32.4 million) theater will be built in its place — a modern design by Danish architects from the Bjarke Ingels Group.

Official performances in the building were stopped after the decision to demolish it was taken two years ago. But members of the Alliance for the Theater Protection defied authorities to stage performances there up to earlier this year.