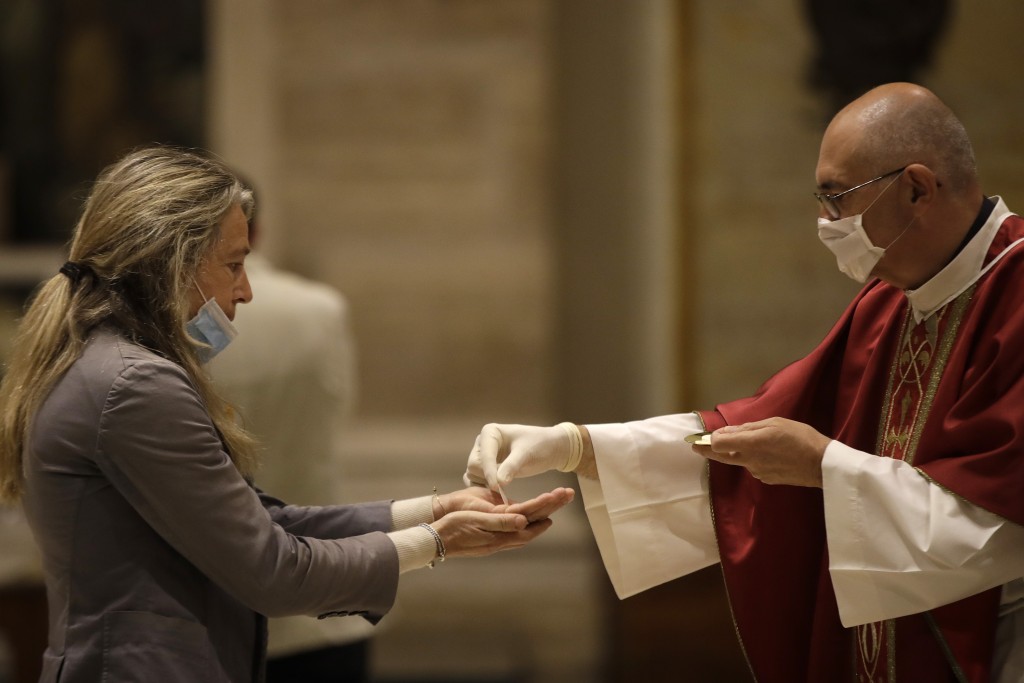 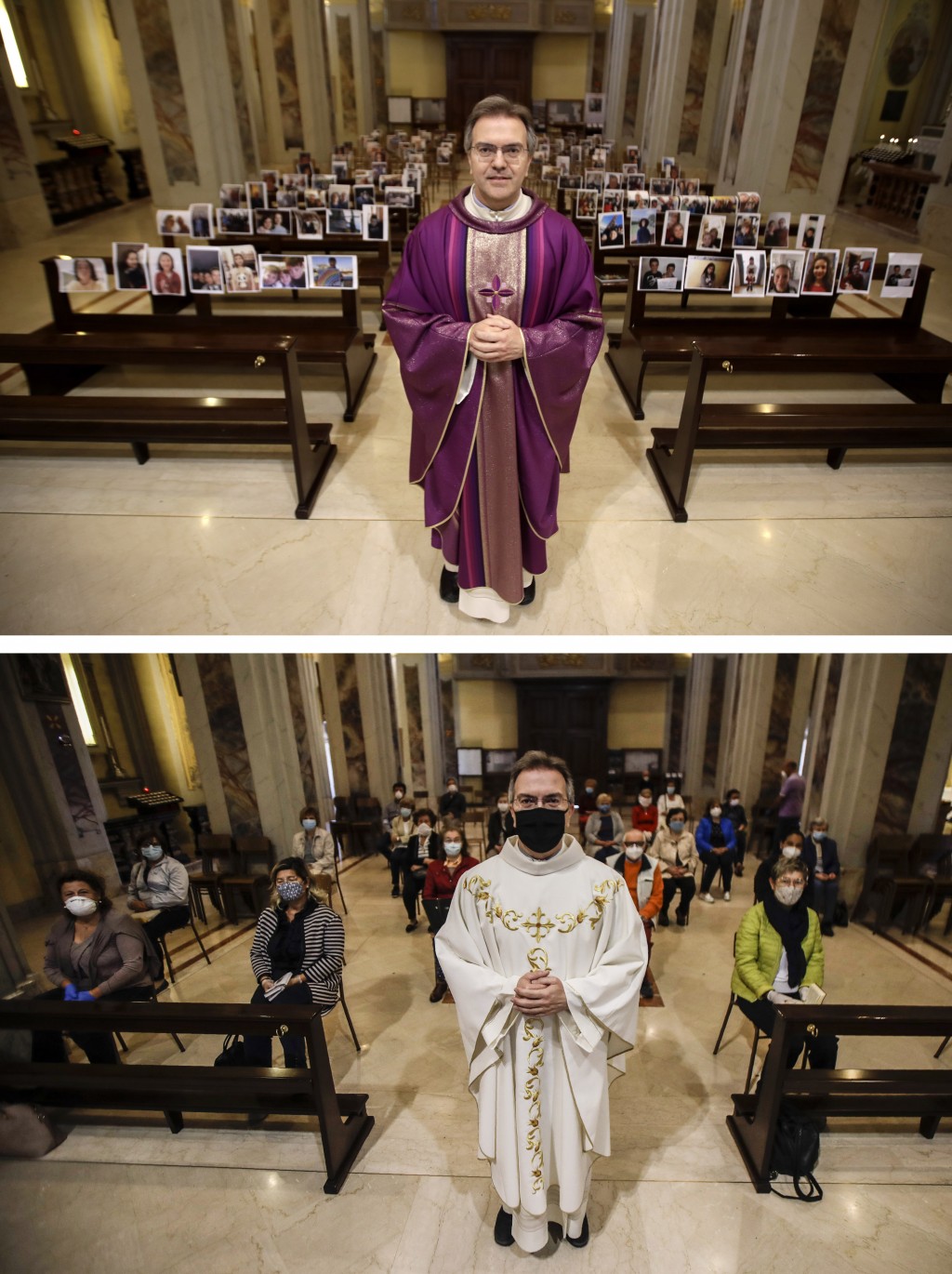 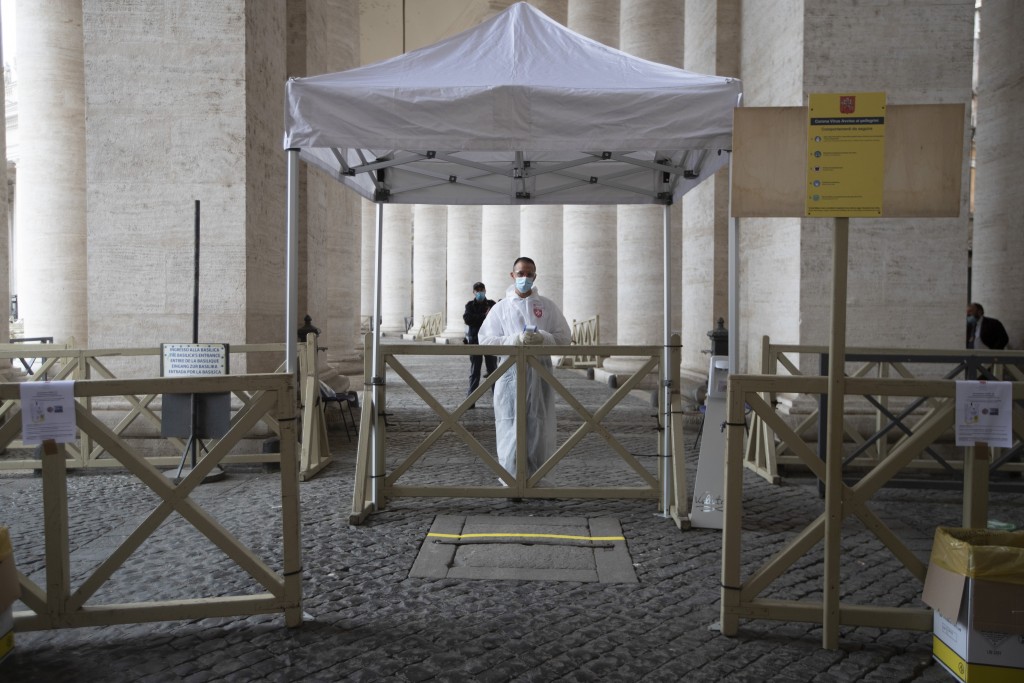 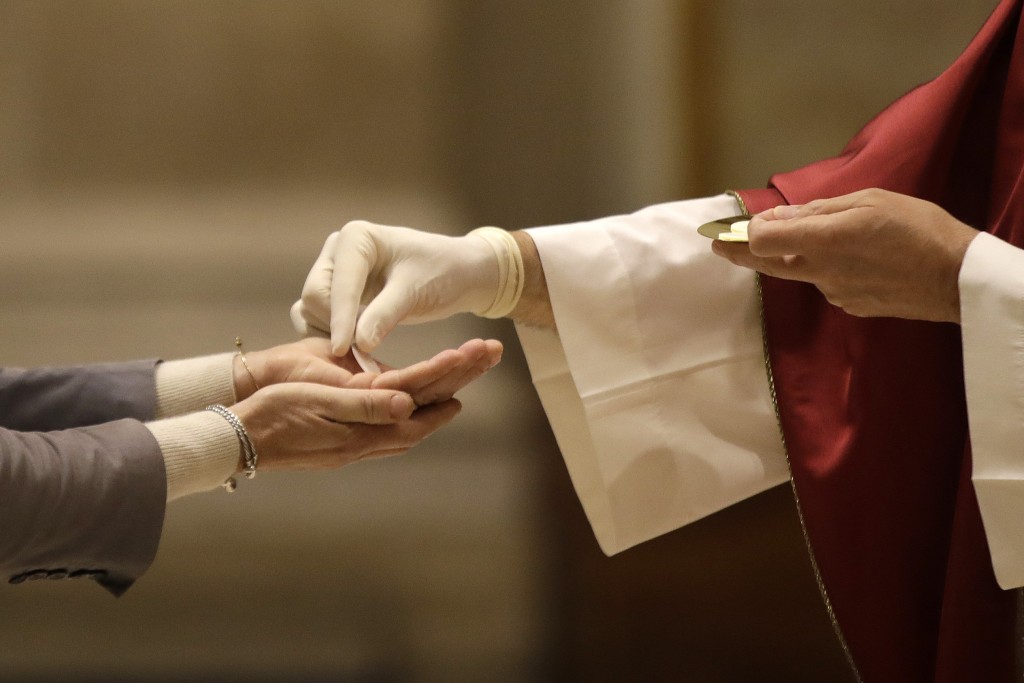 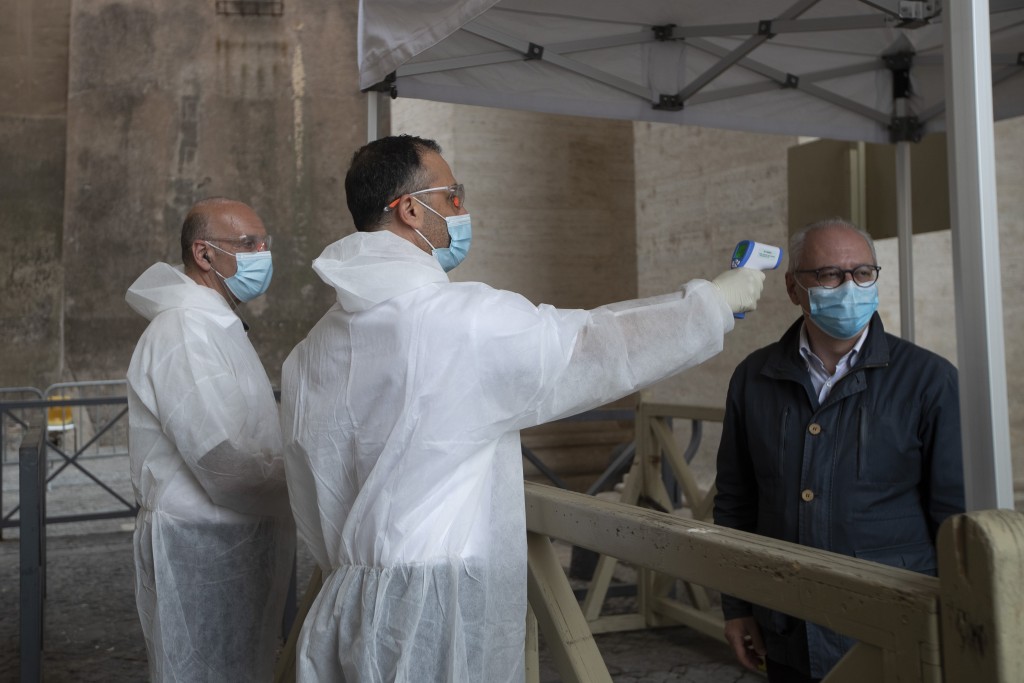 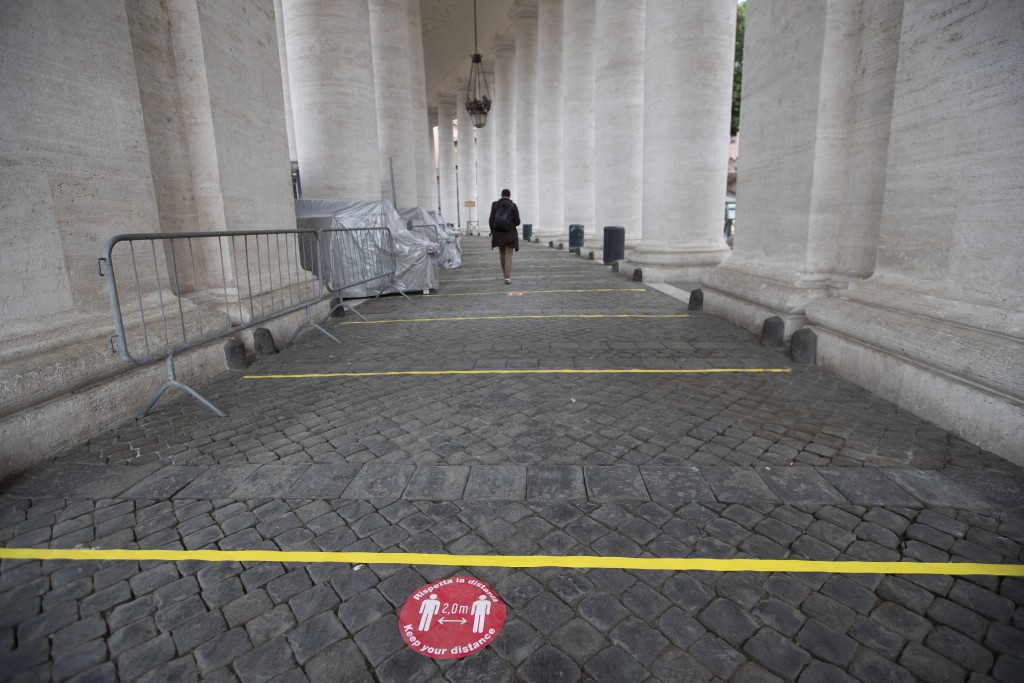 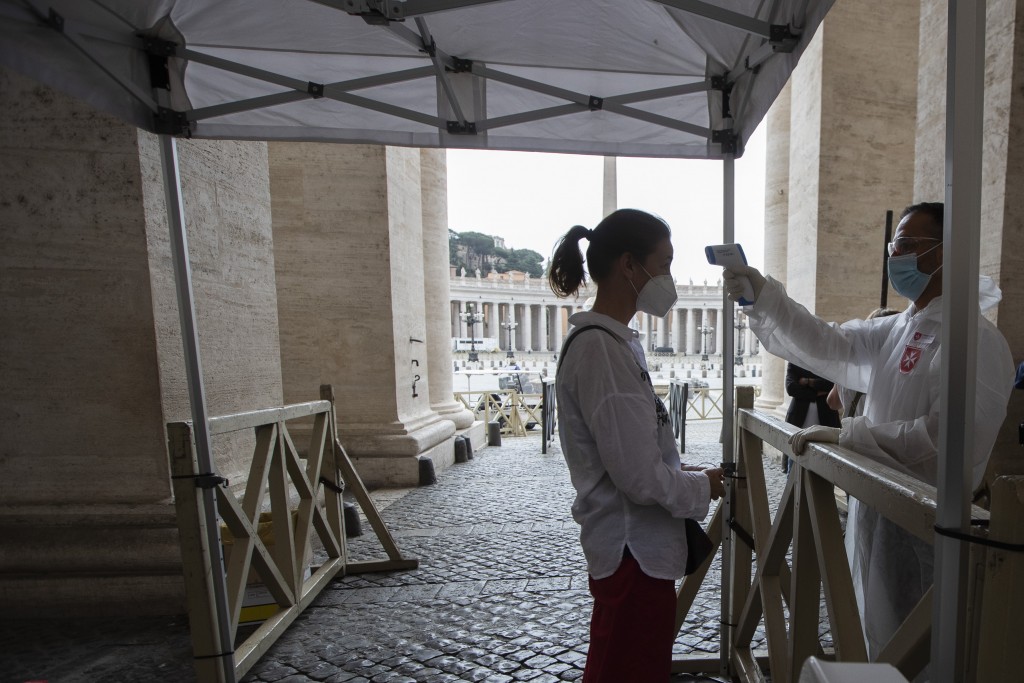 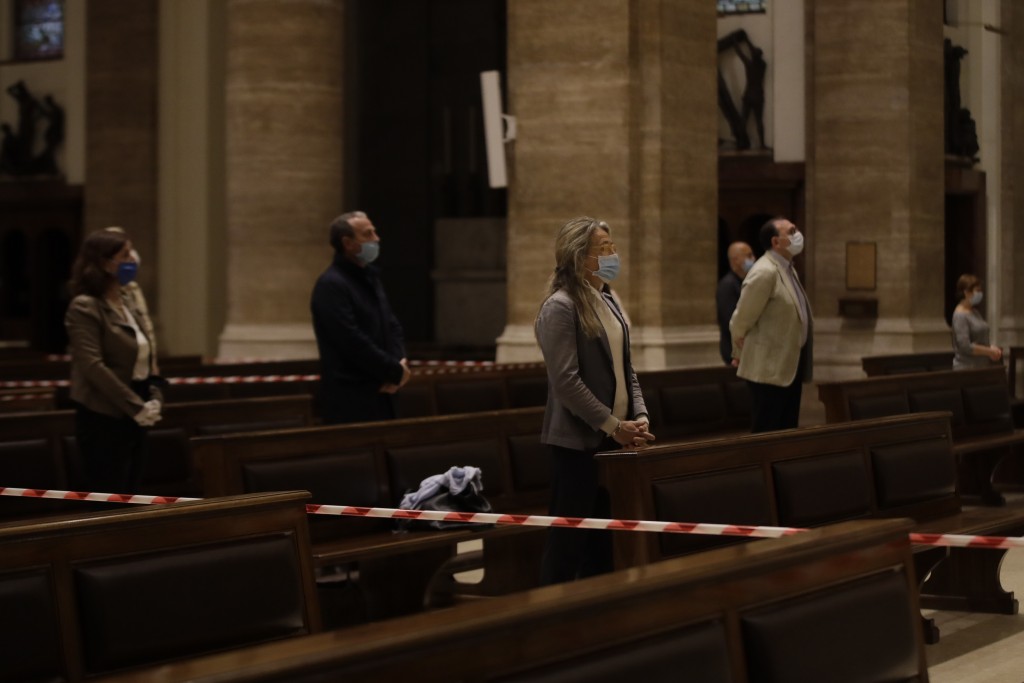 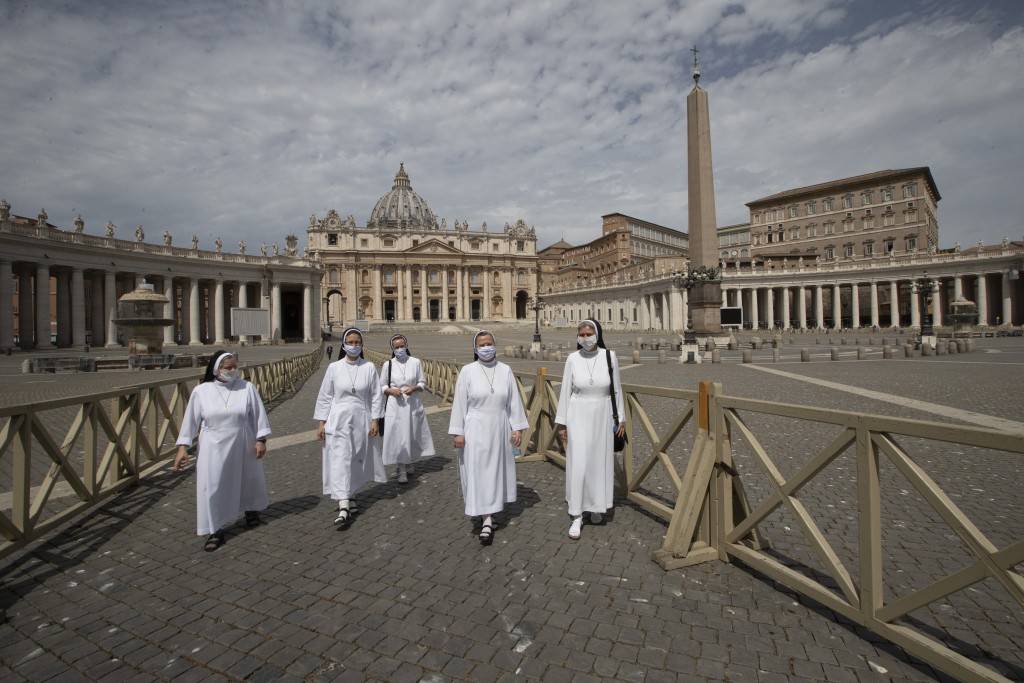 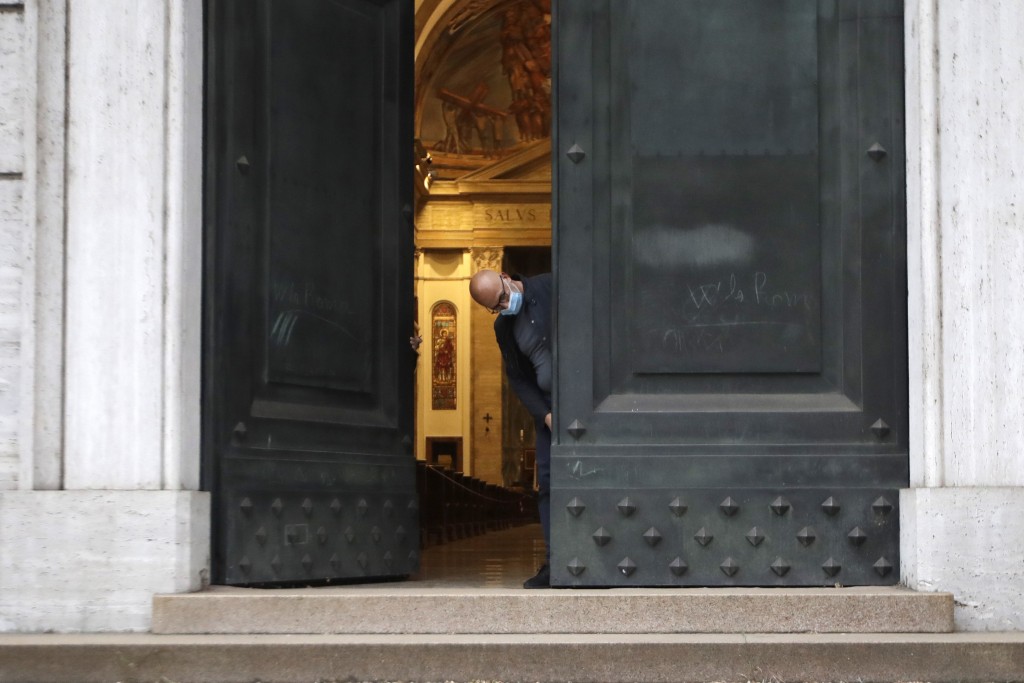 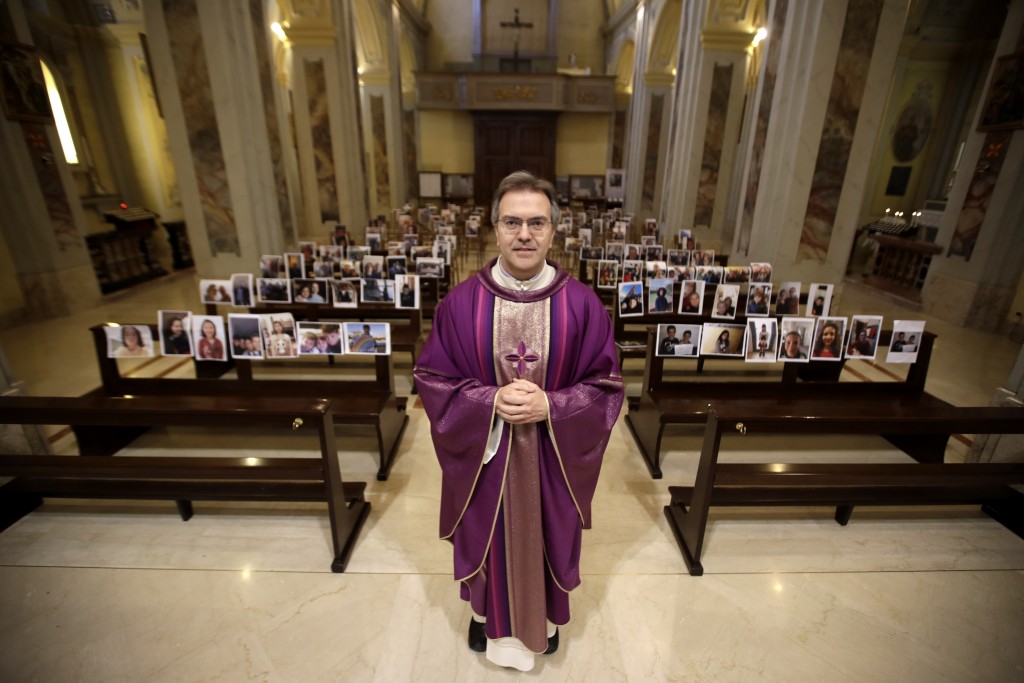 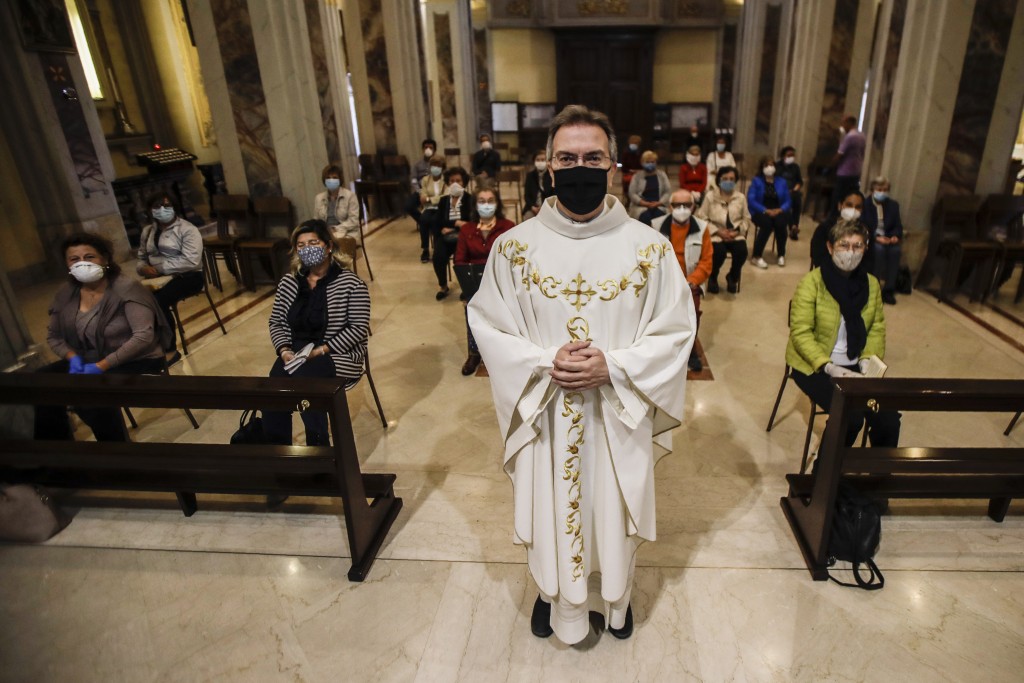 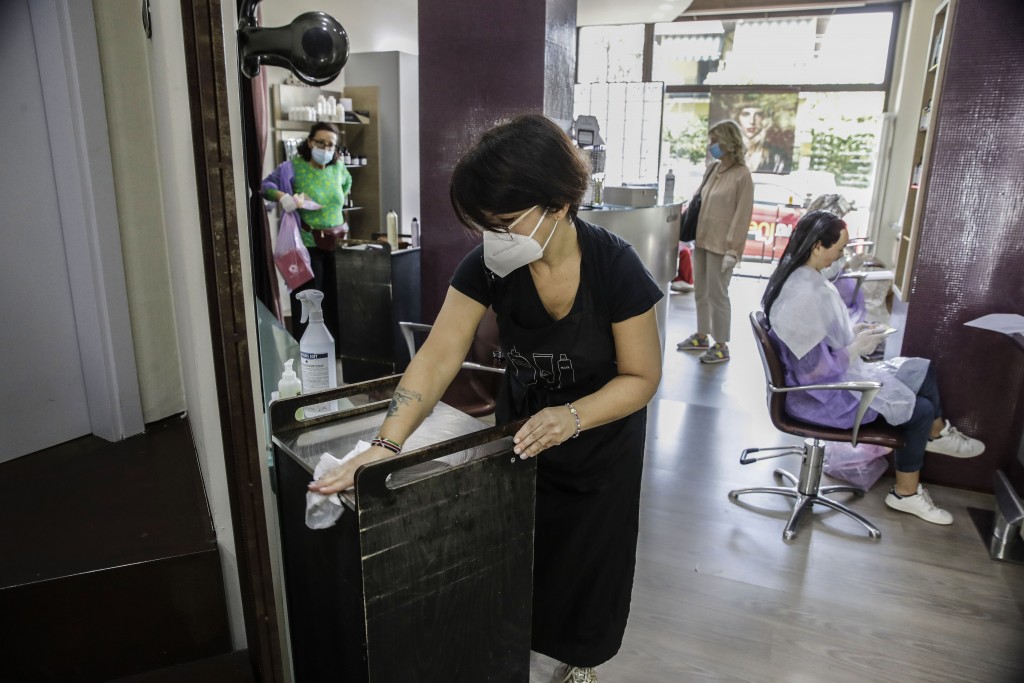 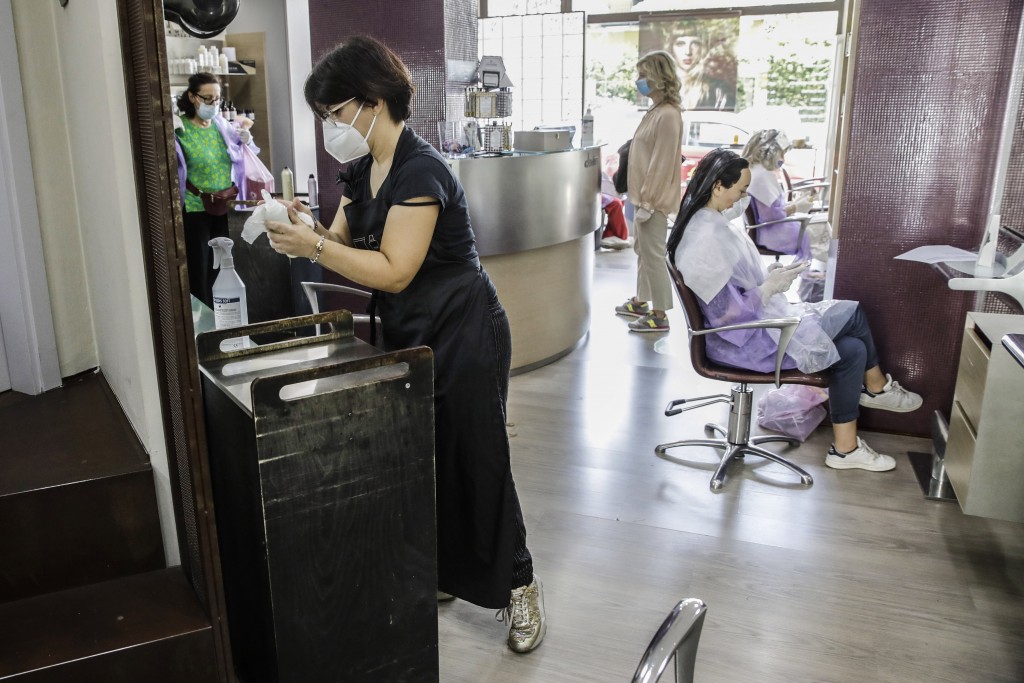 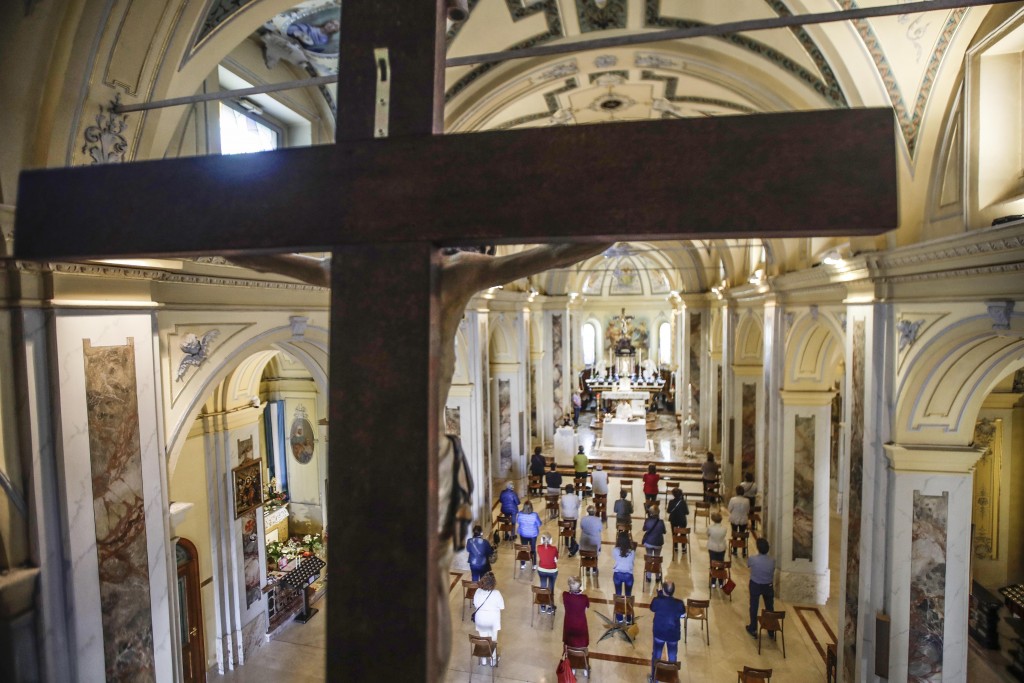 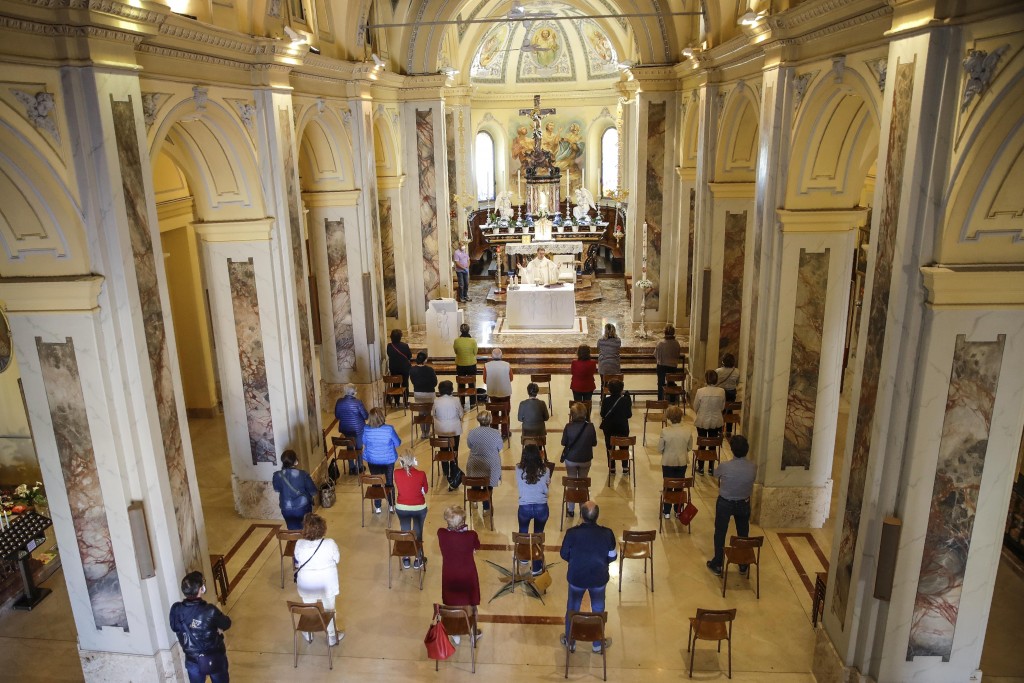 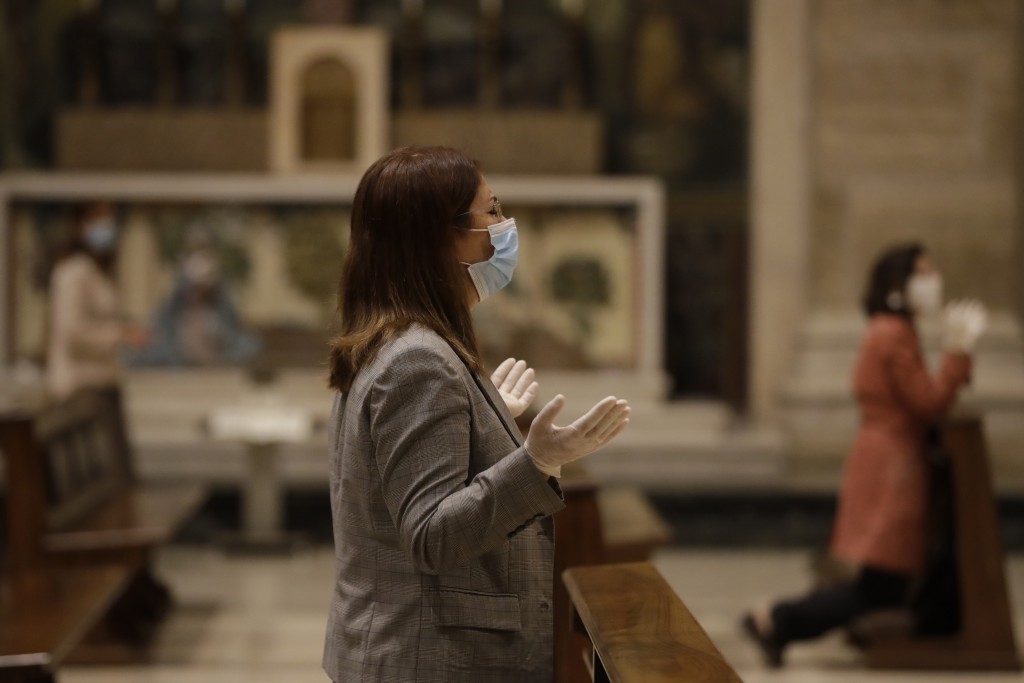 VATICAN CITY (AP) — Italy and the Vatican opened a new phase in the virus crisis Monday, with churches resuming public Masses after a sharp confrontation between the Italian church and state over limits on worshipping in the era of COVID-19.

Guards in hazmat suits took the temperature of the faithful entering St. Peter’s Basilica, where Pope Francis celebrated an early morning Mass for a handful of people in a side chapel to commemorate the centenary of the birth of St. John Paul II.

Across town, the Rev. Jose Maria Galvan snapped on a latex glove and face mask before distributing Communion to the dozen parishioners attending the 7:20 a.m. Mass at his Sant’Eugenio parish.

“Before I became a priest I was a surgeon, so for me gloves are normal,” he joked afterward. “I’m dexterous (with gloves) so the hosts don’t get away from me.”

It was all part of Italy’s next step in emerging from the West’s first coronavirus lockdown, with commercial shops and restaurants reopening and barbers going back to work for the first time since March 10.

But with several hundred new infections being recorded every day, the reopening is hardly a free-for-all, with strict virus-containing measures regulating everything from how you get your coffee to the way you pray.

Catholics, Jews, Muslims, Buddhists, Orthodox and Siks have their own protocols, with at the very least masks required for the faithful and a one-meter distance kept at all times. The fear is that the elderly, among the most devout and also the most at-risk of infection, could be exposed to the virus with resumed religious observance in the onetime European epicenter of the pandemic.

The first such protocol was inked with the country's Catholic bishops, after they issued a blistering public critique of Premier Giuseppe Conte's government when it refused to allow public Masses two weeks ago, during the first easing of restrictions.

The bishops cried their freedom to worship was being trampled on, suggesting they believed the state was violating the terms of the Lateran Treaty, the 1929 document that regulates the relationship between the Italian church, state and Vatican.

Eventually an accord was reached, but it imposes a series of restrictions on access and even the administration of the sacraments: At Sant'Eugenio, the Sunday 11 a.m. Mass usually exceeds 500. Now only 150 can attend. Everyone must wear a face mask and sit 1-meter apart.

There's no holy water or choir, and unused pews for the morning Mass were roped off with tape to keep them sanitized for when the bigger crowds come later in the day.

Priests must wear gloves during Communion and “take care to offer the host without coming into contact with the hands of the faithful," according to the protocol. It goes without saying that the priest doesn't place the Eucharistic host on the tongue of the faithful, as is the Vatican's preferred way.

The Vatican has its own norms, and as a sovereign state, is not beholden to the Italian government measures. But in some cases it goes beyond them, with the guards bearing thermo-scanners in St. Peter's Square taking the temperatures of anyone who wants to enter the basilica.

During a Mass later Monday in front of John Paul II's tomb in the basilica, Lucina Wodzisz, her husband and two boys wore face masks but the priest didn't. And he didn't use a latex glove when distributing Communion, either.

But Wodzisz was thrilled anyway to be able to celebrate the centenary of John Paul's birth by visiting his tomb. The Polish family is particularly devoted to the former Karol Wojtyla (the eldest Wodzisz son is named Karol) and had only hoped to pray before his tomb on the first day St. Peter's reopened to the public.

“We came to be close to the tomb, but we got a Mass!" she marveled. “It's a great sensation to be back."