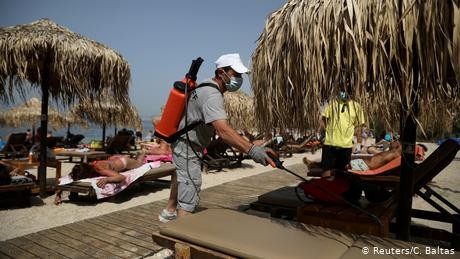 German Foreign Minister Heiko Maas was due to hold a video conference with several of his counterparts across the EU on Monday to discuss efforts to reopen borders and restart the tourism economy. Travel and tourism account for a major part of GDP in member states like Italy, Croatia, Spain, and Greece.

Greek Foreign Minister Nikos Dendias was particularly confident in his country's ability to provide a safe summer vacation spot in comments to German news outlet Redaktions Netzwerk Deutschland, and was keen to urge German tourists not to cancel their plans.

"The aim is to reestablish free and safe travel within the EU," he said.

Greece has emerged as one of EU member states least affected by the coronavirus pandemic, partly due to an extremely strict and very early lockdown. In a country of 10.5 million people, there have only been 2,834 recorded cases of COVID-19 and 163 deaths. The country has already begun to reopen its institutions and economy, including its world-famous beaches.

Croatian Prime Minister Andrej Plenkovic echoed Dendias in an interview with Die Welt daily, saying his country's hotels and beaches were "well-prepared" to welcome tourists this summer. With its relatively small population of 4 million, Croatia has recorded 2,226 infections and 95 fatalities.

"There's a good chance that we will be able to travel this summer not only around Germany but abroad in Europe," said Thomas Bareiss, the German government's tourism commissioner, in comments to the Stuttgarter Zeitung daily.

In the past week, countries like Spain, Italy, and Portugal have all announced dates in early to mid-June to welcome back international travelers.

Countries reliant on tourism revenue have had to balance the economic need to restart the tourist season with continuing to observe physical distancing and hygiene rules that are necessary to slow the spread of the pandemic.

The group of top diplomats is expected to release some details of how the bloc will handle tourism this summer following the conference in the early afternoon.