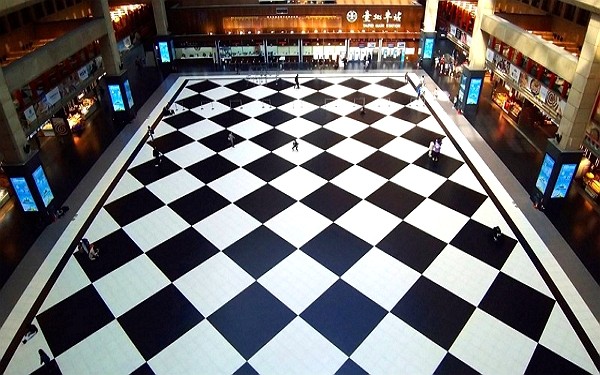 TAIPEI (Taiwan News) — After banning people from sitting on the Taipei Main Station lobby floor in order to prevent the spread of coronavirus, the Taiwan Railways Administration (TRA) said Monday (May 18) that it is planning to extend the ban indefinitely once the pandemic is over.

As a converging point for the Taipei Metro, Taiwan High Speed Rail, Taiwan Railways, and the Taoyuan Airport MRT, Taipei Main Station has served as a central transportation hub for the capital and as a popular meeting place for foreign workers and commuters. The potentially permanent ban would mean the sight of foreign workers sitting on the chessboard-patterned floor over weekends could become a thing of the past.

During an interview on Monday, Taipei Railway Station Master Huang Jung-hua (黃榮華) pointed out that the station has become less chaotic after the mass gathering ban and that the TRA will provide more chairs in waiting areas for travelers to use. He emphasized that all TRA stations were designed for transportation purposes and that sitting on the station floor was never part of their intended design.

Huang said the decision has yet to be finalized, but that the TRA is working toward prohibiting individuals from sitting on the floor. He also denied accusations the new policy was being unfriendly to foreign workers, stressing that it was inappropriate to treat the station as a place of entertainment, reported ETtoday.

Over time, Taipei Main Station has morphed into a popular destination for foreign workers to meet up on weekends. Some Indonesian workers told UDN that the ban would take the fun out of weekends and make it harder for them to meet new friends.

Some Taiwanese are also worried that the potential ban contradicts the values of diversity and acceptance that are respected in the country. They urged the railways administration to consider a better solution that can satisfy both commuters and foreign workers, such as limiting the number of people allowed to sit on the floor.