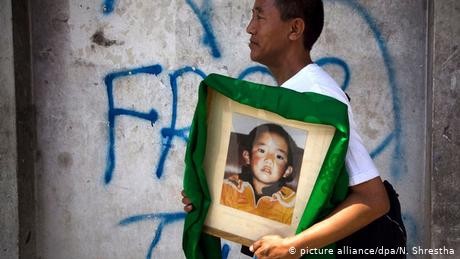 The Tibetan government in exile has demanded to know the whereabouts from the Chinese government of a boy who has not been seen since for the past 25 years.

Gedhun Choekyi Nyima was elected by the Dalai Lama as the Panchen Lama - the second most important position in Tibetan Buddhism's largest school - on May 24, 1995 at the age of six. Authorities took him in for questioning three days later, and he has not been seen since.

"The disappearance of the Panchen Lama is not only an injustice to one person, but it is an injustice to six million Tibetans and their right to religious freedom," said the Kashag, the Tibetan parliament based in the foothills of Indian Himalayas.

There has been pressure on China from the international community to reveal information about the boy. The US renewed calls demanding whereabouts of the Panchen Lama on Thursday.

China claims Tibet as part of its territory. Tibet has been subject to heavy security measures and has seen many anti-government protests.

The Chinese government, which is officially atheist, had named another boy, Gyaltsen Norbu, as the Panchen Lama. In 2015, the Xinhua news agency quoted a Tibetan official saying the Panchem Lama was healthy, getting an education, and did not want to be disturbed.

The person appointed as the Panchen Lama is supposed to be a reincarnation of his predecessor. The tenth Panchen Lama was imprisoned by China and died in suspicious circumstances.

The Dalai Lama, who is the spiritual leader of Tibetan Buddhism, has been living in exile in India since 1959. In February, he marked the 80th anniversary of his enthronement. The Chinese government has said it could seek to name a successor to the Dalai Lama.