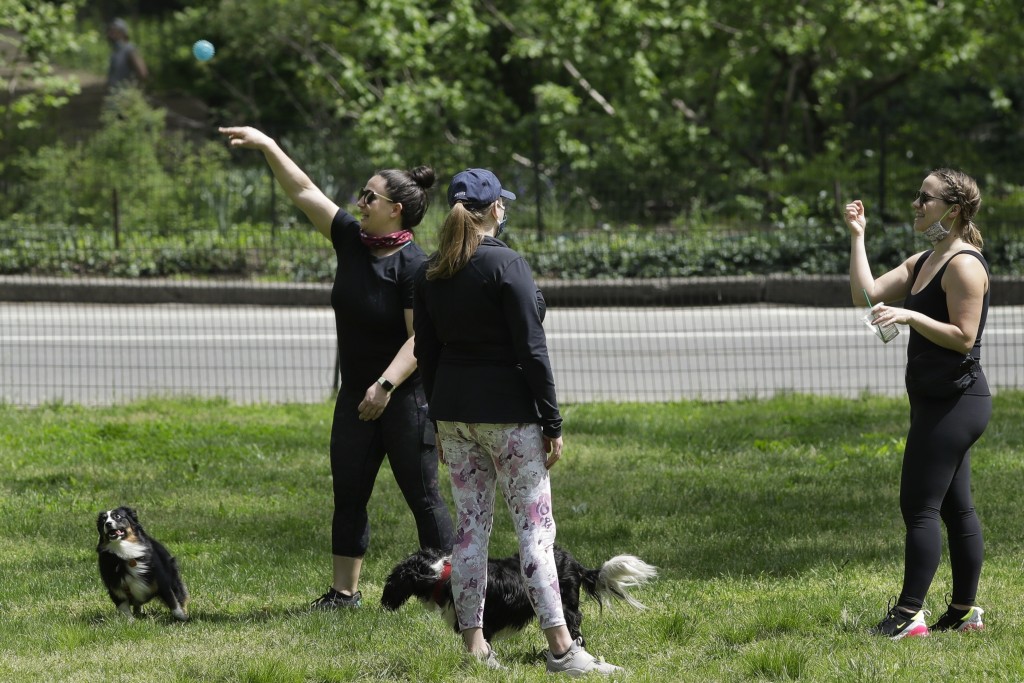 NEW YORK (AP) — New Yorkers who flouted coronavirus restrictions for a weekend night on the town got the mayor's wrath on Sunday.

Mayor Bill de Blasio admonished people seen crowding outside bars, many with drinks in hand but no masks on their faces, for putting lives in danger. Officials may go so far as to shut down establishments that are violating social distancing rules, de Blasio said, asking residents to call 311, the city's non-emergency hotline, if they see this type of crowding.

Bars and restaurants in the city have been restricted to takeout and delivery service since mid-March, when coronavirus cases started to soar, but some in Manhattan were allowing people to dine and drink inside on Saturday.

“We’re not going to tolerate people starting to congregate. It’s as simple as that,” de Blasio said. “If we have to shut places down, we will.”

After a rash of violent social distancing arrests involving people of color, the city eased up on social distancing enforcement this week by no longer having police officers breaking up small groups of people or confronting citizens about failing to wear a mask.

As the weather heats up, though, more and more New Yorkers are flocking to public spaces and familiar haunts for a sense of normalcy after spending most of the last two months cooped up inside — and not always policing themselves.

“If you start to form groups of people and then two, three, five and then it becomes six, it becomes 10, it becomes 15 — that violates what we’re saying about social distancing and that puts lives in danger," de Blasio said.

Beaches on Long Island and in other parts of the region will be open for the holiday, but de Blasio said opening the city's grand strands for swimming and merriment “is not safe” and “is not the right thing to do in the epicenter of this crisis.”

In fact, de Blasio said, the city's beaches could be closed off completely to public access if people don't follow social distancing rules. Fencing is being installed at entrance ways and could be rolled out if beaches — meant now only for nearby residents to get some exercise — get overcrowded or people violate swimming bans, he said.

De Blasio said beaches could open for wider use sometime in the summer, with lifeguard training over the next few weeks for a possible return to duty.

De Blasio is standing by his health commissioner after a report this week that she used crass language in a phone call with a top police commander about supplies of protective face masks. Several police unions and a congressman called for Dr. Oxiris Barbot’s firing over the March call.

Barbot has been absent from several of de Blasio’s recent news conferences on the coronavirus crisis and her department was bypassed last week in favor of the city’s public hospital system to run a new contact tracing program, fueling questions about a possible rift.

De Blasio said Sunday that he has spoken with Barbot “to clear the air on some of the recent issues” and that she would remain in her role.

The mayor said he has “a lot of respect for Barbot,” whom he appointed to the job in 2018, and said: “We’re going to move forward together. I look forward to her doing good and important work.”

During the March phone call, which took place as health care workers were desperate to obtain more protective gear to treat thousands of coronavirus patients streaming into hospitals, Barbot clashed with NYPD Chief of Department Terence Monahan, who wanted more masks for officers.

The New York Post, citing an anonymous source, reported Wednesday that Barbot retorted, “I don’t give two rats’ asses about your cops,” during the call. It didn’t report what Monahan said to prompt that response.

A spokesman for the Department of Health and Mental Hygiene said Barbot apologized to Monahan for her contribution to “a heated exchange between the two where things were said out of frustration, but no harm was wished on anyone.”