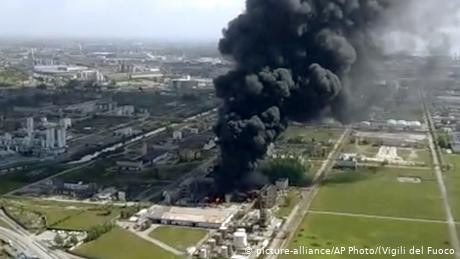 An explosion at a chemicals plant in Porto Marghera in Venice's lagoon area has left two workers seriously injured.

Residents were told to shut windows after a huge black cloud billowed from the site.

Venice mayor Luigi Brugnaro later said the "main fire" had been put out.

And, the municipality said normality, including road traffic, was being restored in the tourist destination left otherwise subdued and largely vacant for weeks by the corona-crisis.

Health authorities said air-borne pollution had been limited to the factory premises.

Earlier, fire services and ambulances had rushed to the scene as television showed thick black smoke visible for kilometres (miles).

Meanwhile, at Lauenburg in the Germany state of Schleswig-Holstein, firefighters said they had confined a blaze and stopped it from spreading to two tall adjacent structures.

The fire was at a plant run by the firm Worlée, which makes resins and varnishes.

Public broadcasater NDR reported that one person had been injured during the blaze, which prompted evacuations of some 20 adjacent firms. As in Venice, residents were urged to stay behind closed windows.

"It's a structure about 40 meters high. That's why it's difficult to use water cannons there", said the head of Lauenburg's volunteer fire brigade, Lars Heuer, as three turntable ladders were positioned around the burning tower.

Firefighter appliances were also sent from Hamburg 50 kilometers (31 miles) away.

A fire vehicle on the way to the scene collided with a car, killing its occupant, said police. They added that the rescue vehicle had been using its alarm lighting and horns.